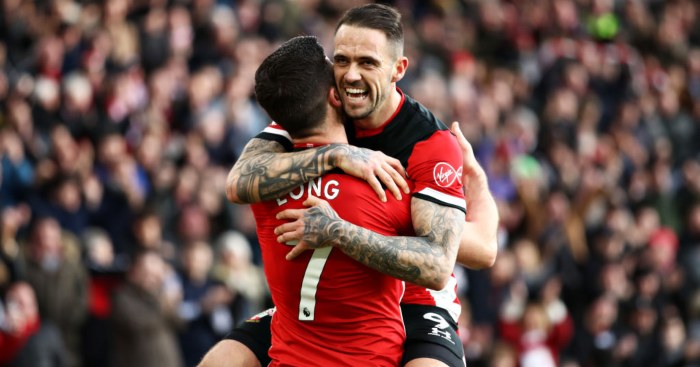 Best Player: Danny Ings
About a thousand years ago, at the age of 22, the meanest-looking man in football had a good season for Burnley and was plucked by Brendan Rodgers for Liverpool. For quite a while afterwards we didn’t get much chance to see how good he might actually be.

Turns out he’s pretty good. Fifteen goals (none from penalties, by the way), and he’s the striker Southampton have so sorely missed since Graziano Pellè and Sadio Mané departed. He’s quick, he never stops running, and he can score with both feet. When the season got stopped in its tracks, he was on pace for the club’s most prolific top-flight year since James Beattie in 2002/3, and before that Le Tiss in 1993/4.

Also turns out he fits Ralph Hasenhüttl’s system pretty well. As at Burnley, he’s best with another striker to play off of, and he’s as good as anyone in the league on the press. It’s a great story for a great competitor who missed way too much time to injury.

Danny Ings is 2nd in the Premier League for goals per 90 mins (exc penalties).

Our recruitment has been dreadful recently but what a £20m well spent that was.#SaintsFC pic.twitter.com/vG7Ysbk1v5

Biggest Disappointment: Jannik Vestergaard
According to Transfermarkt, the best site on the internet for this sort of thing, Vestergaard is Southampton’s record transfer acquisition at 25 million Euros. Just think of all the loo rolls, hand sanitiser and pasta you could hoard for that kind of money.

Or you might spend it on a quality defender, which Vestergaard doesn’t seem to be. Acquired at the beginning of last season, at first he looked like the strong, rangy centre-half the Saints needed. Long strides, excellent in the air.

As time went on, though, his uncertain marking and positioning came to the fore, and although he could be useful after a fashion in a back three, by the end of last year he wasn’t even making the match-day squad. Okay, maybe he needed a year to adjust. He’d been a regular at Werder Bremen and Borussia Mönchengladbach, and that had to count for something.

Not 25 million, though. Hasenhüttl gave him a couple of months to prove himself, but when the Saints finally shifted to the manager’s preferred back four, the Not Even Close To Great Dane was in the doghouse. Only two starts since November, and he now seems unlikely to make it on the south coast.

Jannik Vestergaard to Roma for £40 million

Best Performance: Crystal Palace 0 Southampton 2
Really a toss-up between this match and Leicester City 1-2 Southampton ten days earlier. The opposition was tougher at the King Power, but there were also more moments of uncertainty. At Selhurst Park, though, the outcome was only once in doubt, and that pretty early. In the 17th minute Jannik Vestergaard was caught in possession (see above) and Cenk Tosun seemed sure to score, but he sent the ball into orbit.

After that, there was only one team on the pitch. The Saints’ midfield was completely dominant, and the press forced error after error, Palace finishing with only 63% pass completion. Nathan Redmond was a scintillating man of the match, and he put the team ahead with a beautiful strike in the 22nd minute. Early in the second half Stuart Armstrong played Can You Top This with a classic of his own. It would have been three if Shane Long hadn’t fluffed his lines when in all alone.

The final shot count was 16-5, corners 8-0. Roy Hodgson’s sides may not be the most exciting, but they rarely get beat that badly. Hard to believe Southampton won only one of their next five league matches, and that against Aston Villa.

Worst Performance: Southampton 0 Leicester City 9
Kind of. But since in future years this result will become legend, let’s at least set down exactly what happened.

What happened first was that Ryan Bertrand lost the ball to Ayoze Perez, and Ben Chilwell eventually scored on the counter-attack from a rebound after a Jamie Vardy shot.

What happened next was VAR. The replay showed that Bertrand, going for the ball, had gone studs up into Perez’ leg. So in the 12th minute, Southampton found themselves down to 10 men. That’s worth remembering.

Of course, most teams down to 10 don’t ship nine goals. So let’s ask the question: was this a complete surrender or just a fluke of great finishing?

Answer: both. Leicester’s xG in the match was 4.38, which is huge. Even Manchester City in full flow only hit that number twice a season or so. But that also means you can put down four or five of the goals to great Leicester shooting.

So although it was pretty bad, given all the circumstances, it wasn’t super-cosmic bad, except on the scoreboard. Unfortunately that’s what gets remembered most.

Missing football so much, as a Southampton fan would pay to watch us get thrashed at home by Leicester again :/

Biggest VAR Moment: Moussa Djenepo’s red card against Newcastle
You’d think a praise-be ruled-out stoppage-time equaliser would top any list, but Jonny Evans was so obviously offside when he scored late for Leicester that there was no suspense. And Bertrand’s red against Leicester was only part of a much bigger story. So let’s go with Djenepo’s stamp, ruled a yellow until Graham Scott went to the much-ballyhooed Pitchside Monitor to take another look.

The Saints weren’t playing all that well anyway, and when Djenepo departed in the 28th minute, Southampton fell apart, with only a miraculous performance by Alex McCarthy keeping them afloat. Allan Saint-Maximin finally got the winner, but only by placing his shot perfectly, the ball caroming in off the inside of the post. Newcastle (Newcastle!) could easily have had four or five.

Did their recruitment work?
If you count Ings, who was bought after his loan spell last year, most definitely. If you don’t, not really. Che Adams (did you know one of his middle names is ‘Everton’?) racked up the goals for Birmingham City in the Championship, but hasn’t once looked like a Premier League striker. Djenepo is exciting but very raw, and at the moment is behind Armstrong in the queue. Loanee Kevin Danso’s biggest impact was on Scott McTominay’s leg (see below). That’s about it.

Dick move: Kevin Danso takes out Scott McTominay
If we’re judging by actual danger to life and limb, possibly the least serious of Southampton’s three sendings-off. Only a second yellow, in fact. But Danso went after McTominay with straight red in mind, in apparent homage to Cameroon’s immortal 1990 hatchet job on Claudio Caniggia.

Manager’s job security:
Outsize defeats tend to produce outsize reactions. Andre Villas-Boas got the axe at Spurs after losing 5-0 to Liverpool. Niko Kovac was due for the chop at Bayern this year anyway, but it was the 5-1 loss at Frankfurt that did him in. (Other examples in the comments, please.) So if the Saints board stuck with their man after a 9-0, the odds are he’ll be okay with anything up to an 18-0.

Plus, although it took a bit longer than expected, Hasenhüttl has made Southampton respectable again. The side tailed off in the final weeks before the hiatus, but mid-table stability beckons once more. Sicher wie Häuser.

What they need this summer:
First, another striker. Che Adams isn’t the answer to anyone’s question, and although I’m ready for the 34th straight year to predict Nathan Redmond’s breakthrough, it’ll be on the wing or nowhere. Michael Obafemi may still come good, but you wouldn’t bet the mortgage on it. Shane Long is finishing his career. So Ings needs a partner.

Next, an experienced central defender. Maya Yoshida’s time has come and gone. Jan Bednarek and Jack Stephens have had some good matches in the past two years, and both have time to develop, but neither has yet to earn the epithet ‘bulwark’. With a high-pressing team you need more security at the back.

Last, a right-back. In one of the more amusing transfers of the season, an injured Cédric was offloaded to Arsenal. Yann Valery is more of a wing-back, and although James Ward-Prowse can play the position, he’s probably more useful elsewhere.