Home Burnley F365’s team of the week: Two from Liverpool and Chelsea 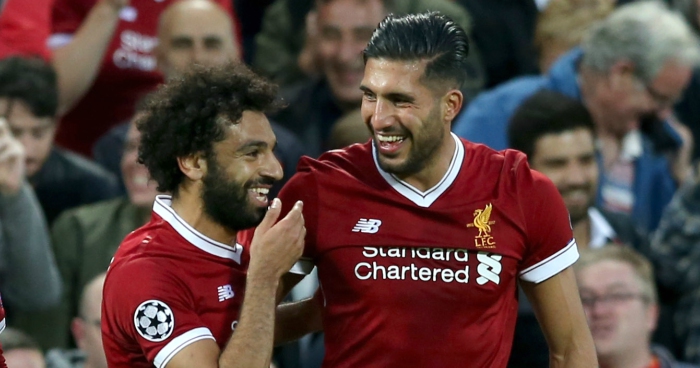 Target practice for F365 commenters again, which can only mean it’s time for another Team of the Week. I didn’t do a very good job explaining the criteria for inclusion last week, so I’ll give it another shot – not that it’ll stop the missiles from coming in.

What I’m looking for are excellent 90-minute performances, the sort of displays that in an average game would be worthy of Man of the Match. Goals, assists, etc. count, but it’s the full showing that’s under the microscope.

Moreover, no matter how good a player you are, you have to play really well to get in – which means that an outstanding performance by a good player will win out over a good performance by an outstanding player. Otherwise the teams would come exclusively from the top six, and that’s not only no fun, it leaves some great efforts from less-celebrated players unrecognised.

Also, whether the team won or lost is irrelevant. Obviously, a player who has a great performance is more likely to be on a winning team, but the result in and of itself counts for nothing; it’s the individual performance. As it turns out, only one player this week was on the losing side, but that won’t always be the case.

Because teams play different systems, it’s impossible to put everyone in the exact position they played. But I’ll try to get everyone as close as possible. I’m no Garth.

And so to this week’s accusations of idiocy/blindness/bias, in a 3-5-2:

Goalkeeper: Heurelho Gomes, Watford. There were some excellent performances in goal this weekend: Tom Heaton, Hugo Lloris, Kasper Schmeichel come to mind. But Gomes gets the nod as 10-man Watford kept out Brighton & Hove Albion. He only had two difficult saves to make, but several times came commandingly off his line to punch clear.

Centre-half: Wes Morgan, Leicester. Maybe his best game for the Foxes since the title season. Positioning was rock solid, he marked Romelu Lukaku well, and generally looked his old powerful self.

Centre-half: Jan Vertonghen, Tottenham. A strong contribution at both ends of the pitch. Couldn’t be faulted in the wild closing minutes.

Centre-half: Kurt Zouma, Stoke. This was close, because he was partly at fault for West Brom’s goal. But he was otherwise outstanding both in defence and attack, and made up for the error with a good pass in the build-up to the equaliser. Other players in consideration were Joel Matip, Harry Maguire, and Ciaran Clark. The last mentioned came closest, scoring a goal and making a clearance off the line, but otherwise wasn’t seriously tested.

Right wing-back: Tommy Smith, Huddersfield. Take 65 guesses who was tied with Xherdan Shaqiri for most key passes from open play this weekend. Got it in one, Ms. Winterburn. After a briefly shaky start, he completely controlled his side of the pitch, and capped it off with a goal-line clearance to save a draw. He’s the captain, too. Allan Nyom of West Brom was a strong second place.

Left wing-back: Robbie Brady, Burnley. Really should be placed a bit further up the pitch, but unquestionably belongs here. Kept driving the team forward against the odds. Appeared to flag when shifted to the opposite side near the end, then delivered that cross from deep for Chris Wood’s late equaliser. Made two tackles and an interception in the defensive third, so maybe wing-back isn’t actually that far off.

Central midfield: Emre Can, Liverpool. His best game in a Liverpool shirt? Finally looked the complete midfielder. The player I most hated to leave out was Mikel Merino of Newcastle, who had this spot nailed down until Can’s lights-out performance. Cesc Fabregas, Abdoulaye Doucouré, and (no, I’m not making it up) Gareth Barry came into consideration too.

Attacking midfield: Ayoze Perez, Newcastle. Got better with each minute and by the end was running rampant. He’s never been the most consistent of players, but performances like this make you remember why he was so highly regarded.

Attacking midfield: Willian, Chelsea. Completes my humiliation at the hands of Simon CFC. Irrepressible. Has to be ahead of Pedro in the pecking order now. Let’s also mention Scott Arfield, who might have had his best Premier League game ever.

Forward: Mohamed Salah, Liverpool. You know, it says something for Jose Mourinho’s ability as a manager that he can win titles while discarding players of this quality. Arsenal didn’t offer much resistance, but wow.