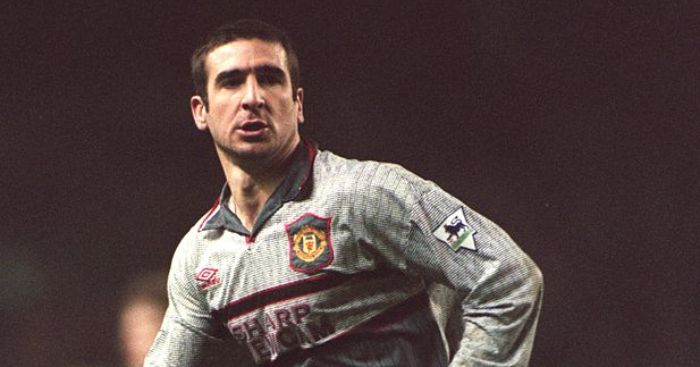 Club Deportivo Guijuelo (Away), 2018-19
If you keep a close eye on the strange world of football and its often baffling sartorial choices, chances are you’ve seen the similar CD La Granja home shirt back in 2015, when the Spanish minnows decided to dedicate their strip to the local produce: judión beans. It generated a massive amount of PR, which was no doubt the thought behind making such a weird kit (it’s here if you’ve yet to marvel at its charms). So following on from that success (which was actually a follow on itself, from a 2016 strip involving broccoli), the manufacturer Daen rolled the dice again and slapped a whole lot of ham on the front of CD Guijuelo’s away shirt for the 2015/16 season, as a homage to the Salamanca region’s most treasured export. 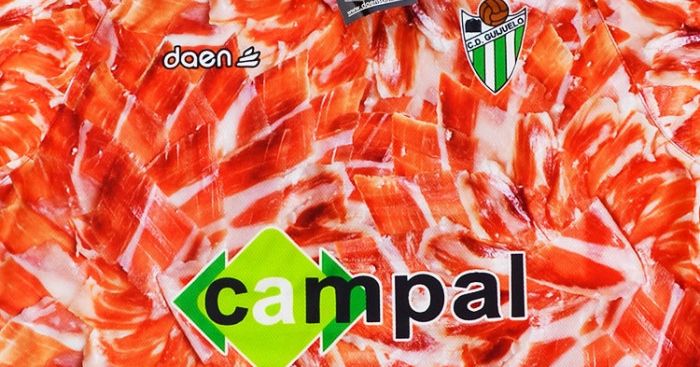 Tjørring IF (Home) 2014-15
‘What’s so random about this plain claret and blue shirt?’ I hear you ask. Well, I suppose the interesting part of this story isn’t so much the final strip – which, to be honest, looks exactly like a training top with a crest stuck in the top corner – but how a small side that currently plays in the fifth tier of Danish football ended up in claret and blue. According to the good people at Classic Football Shirts, the tale is that back in the early ’80s, the club were bored with their shirt and needed some inspiration in how to jazz it up. So, bored and watching some TV, they chanced upon the highlights of a clash between West Ham United and Tottenham Hotspur. Spurs lost, so the Danes opted to convert their kit into a fetching claret and blue affair in honour of the victorious Hammers.

Los Angeles Aztecs (Home) 1978-79
OK, time for something actually quite nice now. We travel back in time to the proto-MLS: the NASL. Americans and football (or soccer if you prefer) have had a somewhat tempestuous relationship over the past century or so, but attempts in the ’60s, ’70s, and ’80s to launch and maintain a North American Soccer League had their ups and downs to say the least. Towards the end of the ’70s, however, the teams involved in the league churned out some of the most extraordinarily cool and stylish shirts imaginable, with this one being a personal favourite. So understated and slick. 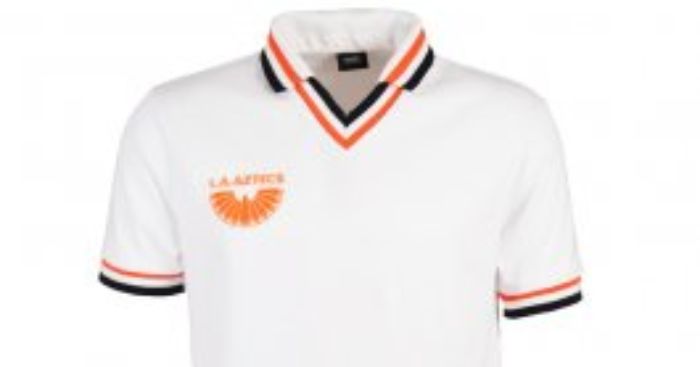 Nagoya Grampus 8 (Home) 1992-94
Probably the only times you’ve ever heard of this J-League side are when an injury-riddled Gary Lineker opted to see out his last few seasons as a professional footballer in Japan a mere year before Arsene Wenger’s managerial appointment. That aside, there’s something amazingly 90s about putting red and yellow together on a strip also involving a club crest of a cartoon Grampus dolphin. It’s somehow brilliant and gaudy at the same time; you have to applaud any team for adopting the colour scheme of the Caramac.

Peña Deportiva Ibiza (Third) 2018-19
Another one from the depths of Classic Football Shirt’s inventory, here we have Hummel opting to represent the White Isle side with what looks like a dodgy psy-trance compilation album from 1997. Absolutely bonkers, and totally awful. Brilliant. 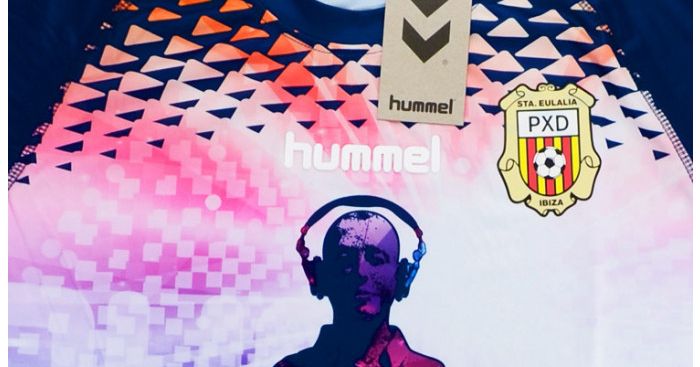 Zaire (World Cup) 1974
Zaire, now the DR Congo, used to rock this bright yellow strip with huge block lettering, which does the seemingly impossible by being both amazingly stylish and bright yellow at the same time.

NAC Breda (Home) 1981-82
In keeping with the yellow theme, here’s an early ’80s jersey from Dutch team NAC Breda. As a fan of nice minimalist design and cool graphics, this one is ticking so many boxes. It’s a great shirt – the font, the layout, the colours, everything. It could almost be a band shirt, or one of those hipster shirts that were popular a few years back, with some obscure long-defunct company on the front with an amazing design. 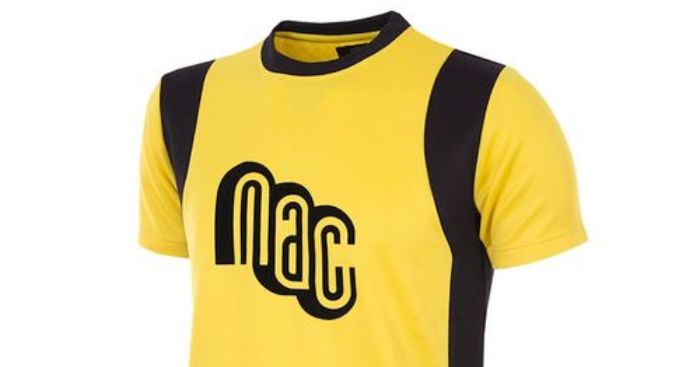 Bedale AFC (Home) 2018-19
Designed to make each player look like an actual hotdog, you could be forgiven for thinking that this outrageously ugly kit is nothing more than a cheap PR stunt by sponsors, sausage makers Heck (themselves no strangers to unfortunate and somewhat bizarre PR stunts involving Boris Johnson). You would be half-right there, because as well as being a PR stunt for all involved, it’s actually also a charity strip designed to raise money and awareness for Prostate Cancer UK, which is a vital organisation doing brilliant work.

Manchester United (Away) 1995-96
Not exactly obscure this one, nor wonderful, but firmly in the weird category. It’s monstrously boring for a start; who wants to play in dark grey?! This shirt adorned everyone’s childhoods and it didn’t exactly look amazing then, but it seems even worse from a 2019 perspective. Anyway, the story goes that even the United players didn’t much like this TV-static-looking away strip, and famously ditched it at half-time during a defeat to Southampton, because apparently they couldn’t see each other on the pitch due to the hideous shade the kit was coloured in. A short-lived top, it would end up being as outdated as the Sharp Viewcam emblazoned on the front. 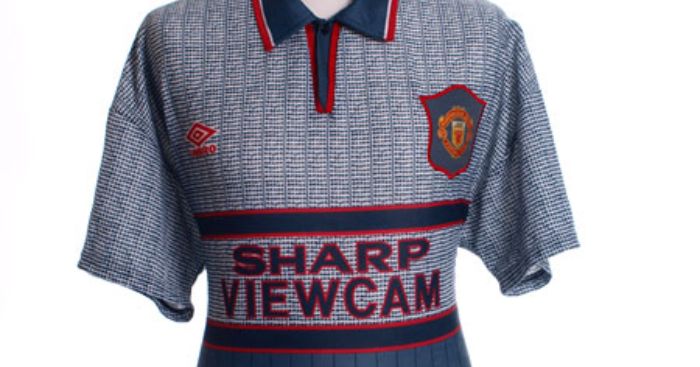 ÍBV Vestmannaeyjar (Home) 2018-19
To finish, we head to the tip of the Icelandic league football pyramid. For context, their system works differently to most, as they can only play when pitches aren’t covered in ice and snow. So while other leagues around the world have the summer off, IBV are most definitely on. They are based on the tiny Vestmannaeyjar (or Westman Islands to non-Icelandic speakers), and have crafted a shirt here that would probably look great if it wasn’t for the gigantic, drunk-looking bright pink pig of Bónus, the cut-price supermarket (ironically, a bit like getting Iceland to sponsor a UK team) taking up that prime real-state on the shirt’s front (modelled beautifully by former Middlesbrough U19 Priestley Griffiths). Still, I suppose we can’t all be sponsored by *checks notes* gambling companies, so maybe they’re onto something.