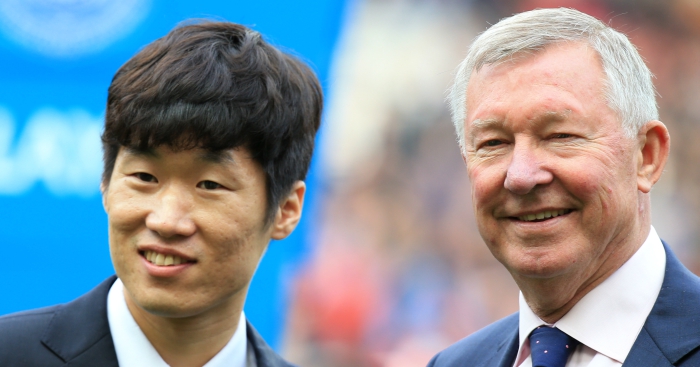 10) Seol Ki-hyeon (Reading, Fulham)
The first South Korean to score in the Champions League during his time with Anderlecht, Seol originally arrived in England at Championship Wolves, then managed by Glenn Hoddle. He stayed for two seasons, but then got fed up at their inability to make the Premier League and joined Reading for a fee of £1m after they were promoted.

Seol then joined Fulham in summer 2007 after falling out with Reading manager Steve Coppell, but struggled to ever make the grade in the first team at Craven Cottage. In the January before the 2010 World Cup, and after a loan at Saudi Arabian side Al-Hilal, he had his contract cancelled to search for a new club.

They do get better.

9) Maya Yoshida (Southampton)
It’s fair to say that there was a good deal of suspicion when Yoshida joined Southampton, six months after striker Tadanari Lee arrived on a free transfer and was a complete failure. Most supporters assumed that this was a marketing ploy, and that Yoshida would also play a handful of games before moving on.

Almost six years later, Yoshida is one of Southampton’s longest-serving players. He has been forced to wait for his opportunities, only once playing more than 25 league games in a season, but the departure of Virgil van Dijk means that he is now a first-choice starter again in the Premier League at the age of 29. If the ability has sometimes been called into question, the commitment could never be.

8) Lee Young-Pyo (Tottenham)
A better footballer than he gets credit for, and a better footballer than Tottenham saw. He was bought by Martin Jol, who labelled him the best left-back in Holland. That was factually incorrect, but Lee still played 70 Premier League games and surged forward on the left before being moved to the right to accommodate Benoit Assou-Ekotto.

In his best season at Tottenham, Lee played 31 league games in 2005/06 when Tottenham finished fifth and had the fourth best defence in the country. He also played on a left side behind Edgar Davids in a 1-1 draw at Old Trafford, which sounds bizarre. Lee faced his countryman Ji-Sung Park in a game that tempted 25 South Korean journalists to fly over. More on that guy later.

But he didn’t merit an inclusion in the English football hall of fame alongside Bobby Moore, Gary Lineker et al. That came in 2015, coinciding with an official visit from President Xi Jinping and absolutely definitely nothing to do with the Government cuddling up to a foreign superpower.

“This devalues our entire Hall of Fame. It is corruption worthy of Sepp Blatter,” said shadow sports minister Clive Efford. “How will all those other players feel when they see Sun Jihai is up there with the rest of them?”

6) Shinji Kagawa (Manchester United)
Clearly the Premier League didn’t see the best of Kagawa, but that really is a great shame. Borussia Dortmund supporters have enjoyed those twinkling toes for two separate spells, and they love him like their first-born. Having fallen out of favour under Peter Bosz, he has started almost every game under Peter Stoger and become one of the club’s key performers.

Still, we can only focus on his time in England. Kagawa’s first season at Manchester United was interrupted by injury but still included a hat-trick against Norwich City; he was the first player from his continent to score one in the Premier League. Two months later, he was the first Japanese player to win the title.

Kagawa was not the only player to fall out with David Moyes, but Alex Ferguson went as far as blaming his successor for Kagawa’s departure. “I was very pleased with Shinji,” he said. “He had settled in well with me, and I also had the feeling that he felt comfortable with us. Every coach has his own philosophy. As Moyes preferred Juan Mata, Kagawa has felt that he is no longer first choice and was a bit resigned.”

5) Ki Sung-Yueng (Swansea City, Sunderland)
Quietly effective is the best way to describe Ki. You rarely notice him grabbing games by the scruff of the neck – although he scored the first against West Ham on Saturday – but nor does he make many mistakes.

Having joined from Celtic in 2012, Ki was named Swansea’s Player of the Year in 2014/15 having been loaned out to Sunderland the previous season, when his future in south Wales looked bleak. The Premier League starts are still slightly irregular (27 in the league since the start of last season), but Carlos Carvalhal did fight to keep him at Swansea in January.

Still, Ki’s contract is up at the end of the season and a new one remains unsigned. Rather surprising is the reported interest from Milan. You’d go for that.

“This club barely survived relegation a year ago, and we were made up of a group of players who weren’t guaranteed anything beyond this season,” Okazaki told the Japan Times. “A lot of us hadn’t seen the light of day. So all the boys, including me, just put their heads down and went to work. No one moaned or complained.”

If that assessment embodies Leicester’s title win, it also embodies Okazaki. He is a team player, but also an excellent strike partner or even willing wide forward. The energy levels are startling, but so is the selflessness. Speak to any teammate and they will freely discuss the popularity of a forward whose crucial goals helped get Leicester over the line.

3) Ali Al-Habsi (Bolton, Wigan)
The only representative of a non-East Asian nation on the list. The only internationals from outside Japan, South Korea or China to play in the Premier League are Pakistan’s Zesh Rehman, Karim Bagheri, Ashkan Dejagah and Andranik Teymourian from Iran and Al-Habsi of Oman.

It really is a wonderful story. Al-Habsi did not even decide to be a goalkeeper until the age of 17, but was subsequently spotted by former goalkeeper John Burridge, then helping out as a coach of the national team in Oman, saving a penalty for the country’s Under-17 team.

Al-Habsi was playing in the local third tier, but was told by Burridge that he would get him a move to the Premier League. Burridge mentored him and made his case to English clubs until he signed for Bolton in 2006. That left no doubt in Al-Habsi’s mind who was responsible for his career. “After God, John Burridge is the main person,” he told the Independent in 2011.

2) Son Heung-Min (Tottenham)
The inspiration for the list after again being instrumental in a Tottenham victory, Son ranks as one of the Premier League’s best squad players. No moaning, no attitude, all hard work, all quality.

It is impossible to overstate Son’s superstardom in South Korea, where every televised Tottenham game is complemented by an inset photo of his face to indicate that he is on the field. But he’s also cherished by Tottenham supporters and his manager. Mauricio Pochettino has watched Roberto Soldado, Vincent Janssen and Fernando Llorente fail to be effective back-up for Harry Kane, and seen Son usurp all of those while also carrying out multiple roles in the team. When Kane was injured in September, it was Son who stepped up.

Son is also only 25, which is absolutely outrageous given that he’s played 165 games in Germany for two different Bundesliga clubs, played 30 Champions League games for two different clubs, played almost 100 Premier League matches, scored 20 times for his country and become the most expensive player in history from his continent.

1) Park Ji-Sung (Manchester United, QPR)
There could only be one. We’d managed to block out the fairly dismal season at QPR during which Park was named club captain of a team that suffered humiliating relegation, but the time spent at Manchester United was successful enough to merit him topping this list.

Park won four league titles and the Champions League at Old Trafford, but was taken into the bosom of the club for his work ethic and stamina; he was known as ‘Three Lungs’ amongst players and supporters. Alex Ferguson admitted that he deeply regretted not starting Park in the 2008 Champions League final, such was his reliability in the biggest games. Park had played every minute of the quarter and semi-finals, but was left out of the squad for the final. As ever, Park took the decision with good grace.

We shall leave the final words to Rio Ferdinand: “He’s a real players’ player. Up there with best in world for movement, and so intelligent and direct with runs off the ball. His work-rate is unreal, he adds a dimension no other player brings to the team. He’s underrated, a real top player.”