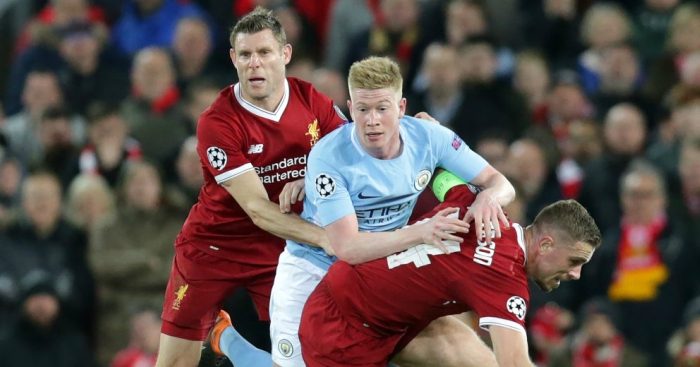 Before you kick off, if a player you’d expect to feature here is not present, wait for next week’s rundown of attacking midfielders first. Although Granit Xhaka is not on that list either.

10) Abdoulaye Doucoure (Watford)
For the first four months of the season, three people at Watford felt destined for much greater things. The Hornets sat eighth in the table after 15 games, exceeding expectations through the shots and tackles of Richarlison and the management of Marco Silva.

Both have since fallen from grace dramatically. An under-performing Richarlison has dropped to the bench under Javi Gracia, the replacement for Marco Silva after the Portuguese flew a little too close to the sun. Fortunately for Watford, the third member of this precociously talented triumvirate has maintained his standards throughout the season.

Without Abdoulaye Doucoure, Watford might well already be doomed. The midfielder leads the ranks in terms of goals (7), tackles (74), interceptions (53) and chances created (39). He has also attempted 2,114 passes – 977 more than Tom Cleverley, his closest teammate. There might be no player more influential to a team’s fortunes than the 25-year-old. Doucoure has been so central to Watford’s present that they should fear a probable future without him.

Of the top 22 players for open play shot sequence involvement in the 2017-18 Premier League, only one is from a side outside the 'big six': Watford's Abdoulaye Doucouré – he's been involved in the build-up sequence to 141 open play shots. Everything goes through him.

9) Luka Milivojevic (Crystal Palace)
Just three times in Crystal Palace’s history has a player scored ten goals or more in a Premier League season. Eleven of Andy Johnson’s 21 strikes in the 2004/05 campaign were penalties, while two of Christian Benteke’s 15 efforts last season came from 12 yards. Luka Milivojevic (seven of ten goals) has similarly relied upon spot-kicks to help fire Palace to safety, yet that should not detract from his achievements.

Roy Hodgson and Wilfried Zaha will justifiably accept the plaudits for the resurrection in fortunes at Selhurst Park, but Milivojevic deserves acclaim. The 27-year-old was substituted in each of Palace’s first three games of the season before being dropped for the fourth against Burnley, this after Frank de Boer had unfathomably deployed him at centre-half in a pre-season friendly. In the subsequent months, he has established himself as one of the most underrated players in the top flight.

The only reason he missed out on our Pleasant Surprise team of the season is because he had already shown glimpses of excellence in his first half-season. The 27-year-old continues to make his £12.5m fee look a relative bargain.

8) Paul Pogba (Manchester United)
Has Paul Pogba been brilliant this season? Hardly. He has struggled to make an impact in certain games, and some performances have provided ammunition for pundits and experts who are hardly scrambling for bullets. A campaign where Scott McTominay even briefly takes your place cannot possibly be viewed in too positive a light.

But has Pogba been disastrous, calamitous or even below average? Not even close. Graeme Souness and those of his ilk will continue to denounce and decry the Frenchman, but this has been a season comprised of considerably more ups than downs. Pogba was excellent before and immediately after injury sidelined him in September and October. United won seven and drew one of the first eight league games he started this season, with the midfielder scoring three goals and assisting five in that time.

The 25-year-old has not maintained that same consistency nor lived up to that same expectation, but he is still performing at a greater level than most. His high ceiling should not obscure the progress he has made this season.

7) James Milner (Liverpool)
There was not enough tumbleweed in the world to illustrate the reaction to Jurgen Klopp’s message last August. “Without going into the transfer market we have a new midfield player, which is nice,” said the German, presenting a square-jawed, six-out-of-ten, thirty-something midfielder to the assembled press. With Liverpool still pursuing a move for Naby Keita, the second unveiling of James Milner was a little underwhelming.

The dominance of Liverpool’s attack has meant that the midfield has often struggled to stand out. Jordan Henderson has been wonderful since returning from injury, but not regularly enough beforehand. Georginio Wijnaldum can never be accused of having an affair, such is his inability to play away. Alex Oxlade-Chamberlain has not played often enough in his favoured position. Emre Can’s impending departure should elicit little more than a collective shrug.

Which leaves Milner, a 32-year-old who played at left-back last season and has started 15 Premier League games this, as the stand-out candidate for the most grateful of Klopp hugs. No player has ever assisted more goals in a single Champions League campaign, after all.

After all these years, it turns out James Milner was right all along. He is a CM.

6) N’Golo Kante (Chelsea)
The streak is over. N’Golo Kante could have completed his hat-trick, but opted instead to try and achieve his dream of a combined tackle interception. The wait goes on.

In the 2015/16 season, the Leicester midfielder topped this very list. In the 2016/17 season, the Chelsea midfielder topped this very list. In his first Premier League campaign to end without a Premier League winner’s medal, the Chelsea midfielder will accept his demotion to mid-table. He has lost seven games this season; he lost a total of eight in his first two. The diminutive Frenchman has still stood tall above most, but this is the first time he has not looked peerless in England.

That said, he is still untouchable at Stamford Bridge, and continues to rule the London roost. The stern competition posed by Tiemoue Bakayoko, Danny Drinkwater and Ross Barkley has clearly had an effect.

5) Wilfred Ndidi (Leicester)
Such was Kante’s unrivalled dominance that Leicester took six months to even come close to replacing him. Wilfred Ndidi had considerable shoes to fill when he joined the Foxes in January 2017, but he has kept his balance thus far. Three players have completed more than 100 tackles in the Premier League this season, and the master Kante (104) has been unable to keep up with his apprentice (138).

There is a reason Liverpool fans were so excited when the 21-year-old was linked with a move to Anfield at the turn of the year. Even as Leicester have lurched from relegation candidates to Europa League prospects, and now to middling mediocrity, their midfield has rarely let their standards slip. Vicente Iborra has been a fine find, but his partner is the one who makes the Foxes tick. Is he going to keep improving? Yes, Ndidi.

4) Nemanja Matic (Manchester United)
The general opinion was, for once, rather evenly split. On the one hand, Chelsea had sold a 28-year-old midfielder with his best days behind him for £40m, replacing him with a 22-year-old France international who had just reached a Champions League semi-final with one of Europe’s most exciting teams for a similar fee. On the other, it took the late Ray Wilkins one month of the season to declare Chelsea’s decision to sell a midfielder who had won two Premier League trophies in three years at Stamford Bridge to a direct rival as “the worst I’ve ever seen”.

There have been more baffling transfer decisions, but it is safe to say that those questioning Chelsea can feel justified. Tiemoue Bakayoko has been their biggest letdown this season, while Matic has been Mourinho’s biggest lieutenant on the pitch. The contrast has been stark.

Matic has largely escaped the wrath of the United manager this season, and for good reason. He helped Pogba realise his considerable potential during the Frenchman’s wonderful start, but unlike his midfield partner, Matic has maintained that same level throughout the campaign. He has completed more tackles (68), more interceptions (61) and 947 more passes than any of his teammates. Mourinho’s “island of personality” has been one of few constants in a sea of inconsistency.

3) Fernandinho (Manchester City)
The gap is as intentional as it is literal. As with the Premier League table, there is a gulf between Manchester City and the rest. Their unconventional midfield trio has been of the utmost importance to their record-breaking success.

It is only natural that City’s attacking players receive the most praise. Their exploits in front of goal have been mesmerising, with the club boasting three of the 12 top goalscorers and each of the four players with the most assists in the Premier League this season. Their defence has been impressive, but has shown more than a few signs of weakness.

In turn, Fernandinho arguably has the hardest task of any player in this side. “I think being a defender in a Guardiola team is one of the toughest things you can do,” he told FourFourTwo earlier this month. “You’ve got to be able to see openings, have excellent passing ability and act fast, as there’s a massive space behind you for the other team to score on the break.

“A lot of people think that, because of the way his teams played at Barcelona, Bayern and now City, he must ask some extraordinary things of his players – but he doesn’t. Pep just wants the game to be played as simply as possible.”

And there is no player better at untangling the apparent complications of his manager’s system than Fernandinho, who makes the simple look brilliant and the brilliant look simple. Without the delicate balance he strikes between defence and attack, City’s success would not be possible. Guardiola considers him “one of the three best holding midfielders in the world” for a reason.

2) David Silva (Manchester City)
If this season has not been enough to convince Stan Collymore of the merits of David Silva, then there is no hope. If the pundit is still willing to question the player’s consistency, and whether he ‘will be remembered as one of the Premier League’s all-time greats’, there is precious little else the Spaniard can do.

As Joni Mitchell is all too keen to point out, you don’t know what you’ve got til it’s gone. The rest of us can sit back and appreciate the majesty of a player whose brilliance might not be truly recognised until his eventual departure. Nine goals, 11 assists and 25 wins in 27 starts in the league is a simply ridiculous record.

At the age of 32, in a different system and position and with the added personal burden of the extremely premature birth of his son, Silva has produced his best Premier League season yet.

is David Silva the greatest player in Premier League history?

1) Kevin de Bruyne (Manchester City)
Let there be no revisionism over this Manchester City midfield. As the start of the season dawned, it seemed likely that an ageing Yaya Toure would be a regular starter, an ageing Fernandinho would be his back-up and an injury-prone Ilkay Gundogan would fill in where needed. Title expectations were tempered by the midfield muddle.

So to pretend that the initial reaction to a midfield trio of Fernandinho, Silva and Kevin de Bruyne was anything less than eyebrow-raising consternation would be foolish. A box-to-box player and two No 10s had absolutely no right to blend so fluidly, to mesh so naturally. Yet it has delivered a Premier League title at a canter.

That Mohamed Salah has scored 43 goals, is on the verge of breaking long-standing Premier League records and has fired Liverpool to the brink of a Champions League final, yet could still conceivably end the season having not won every individual honour possible, is testament to De Bruyne. The absolute best player for the absolute best team deserves the absolute best recognition.