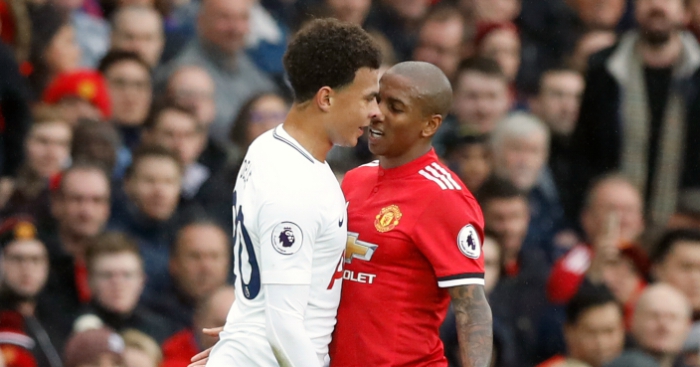 10. Kieran Trippier
Since being appointed Tottenham manager in summer 2015, Mauricio Pochettino has used 56 players in 180 games. Some – Paulo Gazzaniga, Filip Lesniak and Marcus Edwards chief among them – have featured only once. Others – Christian Eriksen (158), Harry Kane (153) and Eric Dier (152) – are mainstays under the Argentine. Many sit in the middle of those two packs.

Take Kieran Trippier for example. The right-back has played 53 games under Pochettino at Tottenham, two more than Moussa Sissoko, but 13 fewer than Ryan Mason. Playing opportunities were restricted as Kyle Walker’s understudy, but the removal of that particular obstacle in the summer has granted Trippier a new lease of life.

The 27-year-old is by no means a guaranteed starter, largely sharing those duties with Serge Aurier, yet the effects of Pochettino’s coaching are clear to see in a player who was released by Manchester City and impressed at Burnley, but was a small fish lost in north London waters at first. His performance against Real Madrid at Wembley was wonderful, his defending is accomplished and his delivery phenomenal.

Walker remains England’s best right-back, but Trippier has strode through the door left open by Nathaniel Clyne’s injury to sit second in the pecking order once more. And considering Walker’s imperious form, that is no criticism.

9. Lewis Dunk
As Brighton have not conceded more than two goals in a league game since March, connoisseurs of defending have been forced to wait for their chance to slam Dunk. The top four, Burnley and Newcastle are the only sides to have conceded fewer Premier League goals this season, and the 25-year-old is their only ever-present defender. Ben Mee and James Tarkowski have been excellent for Burnley, but with the Clarets’ four defenders missing a combined nine minutes so far, theirs has been more of a team effort, albeit a wonderful one.

Chris Hughton has been wise in building the foundations for top-flight safety around a player with over 200 career appearances from League One to the Premier League. Dunk has made a habit of stifling strikers throughout the lower leagues, and has duly risen to the challenge upon promotion.

His omission from Gareth Southgate’s latest England squad is questionable, with the albeit more versatile Joe Gomez in line for his first cap despite appearing in a less reliable defence. But Southgate’s desire for defenders who are good on the ball, combined with his general fondness for players who have developed through England’s age groups, means Dunk faces a battle to make any future squads. If his current performance levels are maintained, it is one he has every chance of winning.

8. Dele Alli
Of all the English Tottenham stars on show at Wembley last Wednesday evening, Dele Alli shone brightest. His was not a performance without fault, his first minutes typified with the usual frustrating touches and misplaced passes, but as any inspirational Facebook post will tell you, imperfection is beauty. That the 21-year-old ended the game disappointed at having not scored a hat-trick against Real Madrid in only his seventh Champions League appearance spoke volumes.

Alli himself would admit he has not been performing quite to capacity this season. A three-match suspension disrupted his rhythm in Europe, while a record of no goals and just one assist in five Premier League games from early September to mid-October was a worrying slump. “I’m not worried about him,” Pochettino said earlier this month. “It’s true, he’s not at his best. But it’s coming. Like winter, it’s coming.” That there is room to improve is all the more impressive.

Far from a secret weapon, Chelsea’s most potent form of attack is a veritable open book; United just forgot to turn the page. Cesar Azpilicueta has assisted five Alvaro Morata goals in the Premier League this season, all headers, all created by crosses from deep positions. Phil Jones was perhaps the most culpable member of an entire defence that decided to switch off at Stamford Bridge.

But that was a rare misstep in an otherwise fine season. Jones has played at least three more games than any other centre-half for the Premier League’s least porous defence, and United looked abject in the ten minutes after his removal against Huddersfield last month. United have conceded a league goal every 298.3 minutes with Jones on the pitch this season, and one every 47.5 minutes without him.

6. Fabian Delph
How quickly perceptions change. Back in August, Fabian Delph was the subject of interest from Stoke, having started just two Premier League games under Pep Guardiola last season. He had not been selected in an England squad since before Euro 2016. Aston Villa fans scoffed when he departed in search of even greener pastures in 2015, and were busy rolling on the floor having the last laugh two years later.

A long-term injury to Benjamin Mendy has left a gaping hole that Delph has filled, albeit while having to twist and contort into the role. The 27-year-old is no left-back but has the sort of attitude and professionalism that a manager craves, and Guardiola has moulded him into an accomplished stopgap.

Fabian Delph has turned down a move to Stoke as he believes he can get into Man City's team. pic.twitter.com/49jqsmZbEu

Delph was synonymous with Eliaquim Mangala and Wilfried Bony as fringe players Manchester City were desperate to cut in the summer; with no realistic alternative, he is just as important to the country’s most dominant side as Kevin de Bruyne and David Silva months later.

5. Ashley Young
There completes Manchester’s obsession with converting discarded England internationals into full-backs and revitalising their careers. As with Delph, Ashley Young had no defined role in an expensively-assembled squad, but grasped the opportunity when it presented itself. Daley Blind, Matteo Darmian and Luke Shaw shared left-back duties at Old Trafford last season, yet it is Young who has made the position his own.

As disappointing as Young was against Chelsea, his imperious display in the victory over Tottenham suggests that the 32-year-old still has an integral part to play. He has used his past as a talented winger who relied on trickery and speed to beat his opponents, and has used it to form his reference point as a full-back. With the roles reversed, it is rare to see Young outclassed in one-on-one situations.

“Maybe one day it will happen again,” said Young of an England recall in April, having not featured for his country since September 2013. He is back in the picture under Southgate.

4. John Stones
As far as calendar years go, 2016 was a difficult one for John Stones. The centre-half started just two Premier League victories in 19 games from January to May for Everton, and only six more in a further 19 games from August to December for Manchester City. His was not a reputation quite left in tatters, but the damage done felt almost irretrievable.

By March, Guardiola was complimenting John’s stones. “John Stones has more personality than all of us here together in this room,” he said. “More balls than everyone here. I like that. I love him. Under pressure, the people criticise him, so I am delighted to have John. With all his huge amount of mistakes. I love him. I love guys with this personality.”

“With all his huge amount of mistakes” felt like an unintentionally damning but hilarious indictment, but this was the teacher realising that his student has a thicker skin than most. Stones has endured the sort of criticism from both the public and the pundits that has derailed many a career, and yet the 23-year-old has emerged unscathed. No English centre-half has been as assured either defensively or in possession this season. Of the 1211 passes he has attempted in the Premier and Champions Leagues this season, he has misplaced just 47.

3. Harry Kane
He has failed to score in eight of his 14 games in all competitions for Tottenham this season, yet no player has more goals in England’s top four divisions (13). He has had one spell out through injury, yet has scored more Premier League goals in 2017 (29) than Burnley (28), West Brom (27) and Crystal Palace (25). He cannot be deemed world class until he moves to Barcelona or Real Madrid, yet is good enough for Tottenham to be named in his honour by rival managers.

Pep Guardiola describing Spurs as “the Harry Kane team” became a story in itself in September, but it was as much a compliment to the player as it was a comment on the effect he has on his team. And yet much like Alli, this has not been Kane at his best. That simply puts into perspective just how ridiculous the striker is; even operating around second and third gear, he is still streets ahead of almost every other striker in the division.

2. Kyle Walker
The debate will rage on over Kyle Walker’s valuation, but that is not something in the player’s control. The selling and buying club dictate that figure, and while it is based on Walker’s ability, performance levels, age and suitability, he is not sat across Daniel Levy at the negotiating table.

“It’s out of my hands,” the right-back said in July, discussing the furore surrounding his £50m fee. “Whatever the two clubs decided to pay, that’s nothing to do with me. I’ve just got to concentrate on what got me here – keep playing the football I was playing at Tottenham.”

If anything, Walker has only improved. He was a fine player at Tottenham but he has been haunted by constant questions over his defending and tactical acumen, yet he has slotted straight into a Manchester City side that has dropped two points in the Premier and Champions Leagues in 15 games.

Jose Mourinho described the England international as a “normal player” in July, but Walker’s development even aged 27 continues apace.

1. Raheem Sterling
Perhaps Arsene Wenger was simply a scorned lover lashing out at his crush for rejecting him. We will perhaps never know the intricacies of Arsenal’s late pursuit of Raheem Sterling in the summer, the Frenchman attempting to soften the blow of losing Alexis Sanchez by including the England international in the deal. But, util Sunday at least, Wenger had always been a vocal supporter.

Those have often been in short supply for Sterling, a player the neutral fan has often revelled in hating. Yet the critics have been silenced by the finest campaign of his career so far. No-one predicted that the 22-year-old would be the club’s joint-top goalscorer by early November, and Sterling is already only one goal behind the best seasonal goal return of his career.

Will we pretend not to be delighted that the boy is pretty bloody good? Nope.

(Calm down Burnley fans. Sean Dyche can be the manager. Soz.)