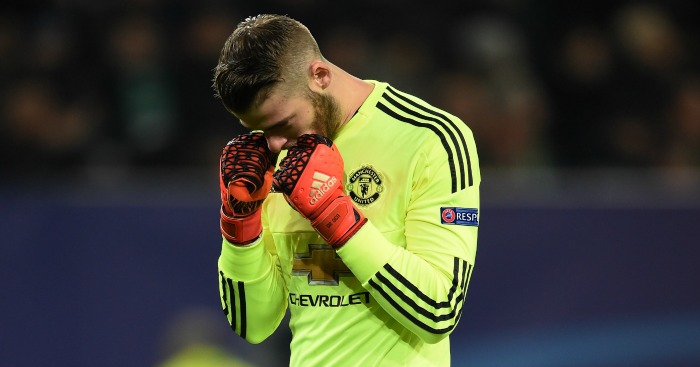 10) Rob Elliot (Newcastle United)
I’ll level with you, this No. 10 spot was blank for a long, long time. Boaz Myhill, Ben Foster and Lukasz Fabianski were all seriously considered, but instead I plumped for Rob Elliot. Foster has started 11 games, Myhill was pretty unmemorable and no goalkeeper has made more mistakes leading to goals than Fabianski.

Elliot is an unlikely nomination, I grant you. When Karl Darlow arrived at Newcastle last summer he took over as the club’s No. 2 goalkeeper from Elliot, who must have assumed that his time in the Premier League had come to an end.

Not a bit of it. When Tim Krul was injured with Darlow already on the treatment table, Elliot seized his opportunity. His performance at Bournemouth was one of the best individual displays of the Premier League season, and he has continued to protect his goal without any discernible help from a ramshackle defence. The poor sod’s recent injury has ruled him out of a starting place at Euro 2016.

9) Adrian (West Ham)
Adrian might have dropped down from his lofty position of No. 2 in last year’s list, but West Ham’s goalkeeper still gets plenty of Football365 love. Sarah Winterburn picked him as one of her best uncapped Premier League players last month, and Adrian is also the only non-international on this list. In Vincent del Bosque’s defence, you can see why.

Adrian’s save percentage has decreased slightly from last year, but his passing accuracy has increased, an indication that he’s playing the ball out from the back more often than under Sam Allardyce’s less expansive brand of football. He’s also having to make saves less often, evidence that Bilic’s adventure has hardly left gaping wide holes in defence.

8) Fraser Forster (Southampton)
‘Can I choose a goalkeeper with only 14 league starts this season?’ I mused to myself when compiling this list. ‘Course you can, Daniel,’ I replied. ‘You’re your own man now, almost an adult. If you say Forster deserves it because not many goalkeepers have stood out this season, stick by it. The commenters won’t mind. They’re always reasonable people.’

Forster was indeed injured for over half this season, but he has been bloody brilliant since his return. In the 14 league games he has played, Southampton have conceded just 11 goals and kept six clean sheets. “We know he’s one of the best in Europe,” said Ronald Koeman last month, just casually enough to make you believe him.

Also, he’s so big. So, so big. Seeing Forster in person is like watching a wardrobe walking around with a bedside table sat on its top. He’s the Ikea catalogue incarnate.

7) Heurelho Gomes (Watford)
Having been on Spurs’ books for the best part of three years without making a league appearance, it’s fair to say that there’s not a lot of love for Gomes at White Hart Lane. He earned a reputation for mishap, as this uncharitable ‘The worst of Heurelho Gomes’ video testifies. Gomes was described by Alan Hansen as “one of the worst goalkeepers I’ve ever seen”.

When Gomes rolled up at Vicarage Road, therefore, most Watford fans prepared themselves for some delicious football banter, but their new goalkeeper has actually been the opposite: Dependable, consistent and really very good indeed.

Having helped Watford get promoted last season, Gomes has stepped it up a notch in the Premier League. Watford boss Quique Sanchez Flores has labelled him as important as Troy Deeney and Odion Ighalo to Watford’s success this season. Big talk.

6) Petr Cech (Arsenal)
“There is obviously talk of Arsenal signing Petr and if they do get Pete, that will strengthen them for sure. He will save them 12 to 15 points a season,” said John Terry when Cech’s move to Arsenal from Chelsea gained traction. After 33 games last season, Arsenal had 67 points. This season they have 60.

That says one of two things:

1) Cech hasn’t been a very good goalkeeper for Arsenal, costing them points rather than gaining them.

2) Signing a goalkeeper but not a single outfield player was the most foolish decision of Arsene Wenger’s Arsenal tenure.

5) Kasper Schmeichel (Leicester City)
Reportedly ready to quit football after failing to make the grade at Manchester City, after being loaned to Darlington and Falkirk, among others. Signed by League Two Notts County on £15,000 a week by mysterious owners that never had the money they promised. Signed by Leeds and then sold after supposed poor form. Signed by Sven-Goran Eriksson in the Championship. Schmeichel’s career has already followed an odd path, and it’s hard to believe that the goalkeeper turns 30 in November. Becoming a Premier League champion with Leicester would be the most bizarre chapter yet.

There is no doubt that Schmeichel has been ably protected by the excellence (and fitness) of Wes Morgan and Robert Huth, and his save percentage is lower than six other goalkeepers on this list. Yet his record of no errors made leading to either a shot or goal in 34 starts is unsurpassed in the top flight.

4) Joe Hart (Manchester City)
For those reading this on Tuesday, you should wish Joe Hart a very happy 29th birthday. It’s a long time since we felt so secure about England’s first-choice goalkeeper. Hart has already played almost 500 career matches, a model of near-consistency since being dropped for two games by Manuel Pellegrini in September 2014.

This has not been a good season for Manchester City, but it’s hard to lay much blame at the feet of a goalkeeper forced to play behind a regularly changing defence. Vincent Kompany and Eliaquim Mangala – six starts; Kompany and Nicolas Otamendi – 11 starts; Mangala and Martin Demichelis – three starts; Mangala and Otamendi – 13 starts; Demichelis and Otamendi – 13 starts. Throw in Gael Clichy, Pablo Zabaleta, Bacary Sagna and Aleksandar Kolarov each making at least 15 starts, and the constant state of flux is clear.

Behind them, Hart exists as City’s closest thing to a constant. It is a very peculiar English tradition to look for the negatives in our goalkeepers. Instead, just be thankful to have him.

3) Jack Butland (Stoke City)
Has Jack Butland been the best English goalkeeper in the Premier League this season? Yes. Does that mean he should be England No. 1? No.

There are many people who don’t understand that those two answers above can co-exist peacefully. Hart has repeatedly proved to Roy Hodgson that he is England’s automatic choice in France, the injury sustained by Butland against Germany making the debate moot in any case.

But Butland’s time will come. Still just 23, his first season as a Premier League No. 1 has been successful beyond even his grandest ambitions. There are those who will pick him in their team of the season, and understandably so.

Slight flaws remain (he has dropped five crosses this season and made four errors directly leading to shots), but Butland has time to iron out these slight issues. By 2020, he really might be England’s No. 1.

2) Hugo Lloris (Tottenham)
Lloris may have kept more clean sheets than David de Gea, but he has also enjoyed the benefit of playing behind the best central defender in the league. My victor Hugo gag will have to wait for another year.

That said, Lloris has still been exceptional this season. Having made no secret of his ambitions to play at the very highest level but, with Manchester United interest rife, a wrist injury put paid to any move last summer. Tottenham’s captain has simply ensured that he will be playing Champions League football at Spurs instead.

Lloris is not a screamer, fist-bumper or chest-beater, but he leads by quiet and studious example. Some teams thrive best with a captain demonstrating audible passion, but Tottenham’s players feed off their goalkeeper’s quiet authority. He is the ultimate calming presence.

1) David de Gea (Manchester United)
As we said when nominating De Gea in our alternative PFA Player of the Year nominations list, answering the question of where United would be without their goalkeeper is impossible to answer with certainty. ‘Lower in the league table’ is, however, a dead cert. United’s continued chances of making the top four have relied upon a defence that has kept 13 clean sheets. More than once, the word ‘defence’ could easily be switched for ‘De Gea’.

De Gea is a very modern goalkeeper, happy to save shots with his feet, legs and body rather than hands. That can occasionally make those saves look scruffy, for our preconceptions dictate that a goalkeeper should always lead with his gloves.

But don’t be fooled into thinking De Gea gets lucky, or that shots are so often struck at him. He is a modern master of positioning and making himself big, accomplished too in the spectacular one-handed saves if the situation demands it. I honestly believe Manchester United have the current best goalkeeper in the world.