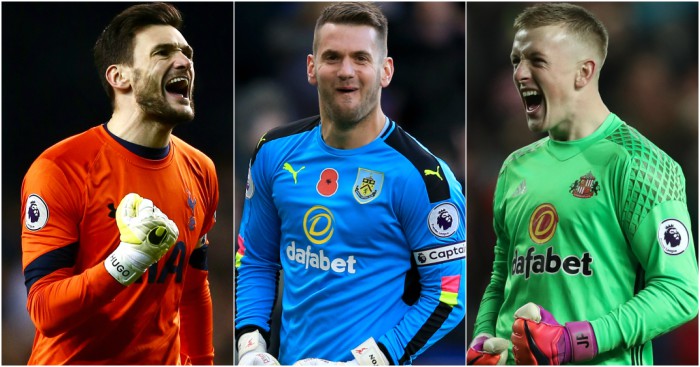 We asked resident goalkeeping expert Ian Watson for his list of the best keepers this season. Here are the results…

10) David De Gea – Manchester United
Jose Mourinho reportedly felt that De Gea needed a kick up the arse in recent weeks, but if it appears his standards have slipped that is probably only because his are so much higher than the vast majority of his peers.

United’s Player of the Season for the last three years has made a couple of uncharacteristic mistakes, but the 26-year-old has remained a solid presence behind a back four that has changed on an almost weekly basis. He remains one of the two best keepers in the Premier League and, should United finally succumb to Real Madrid’s persistence this summer, they will undoubtedly be worse off, regardless of who fills De Gea’s gloves.

9) Victor Valdes – Middlesbrough
A few eyebrows were raised when Aitor Karanka brought Valdes to ‘Boro in the summer, given the former Barcelona keeper looked to be finished at the highest level. As back-up at Manchester United and loanee at Standard Liege, the 35-year-old had made just 10 appearances in the three preceding seasons, with Louis van Gaal particularly determined to consign the ex-Spain stopper to the scrapheap.

Valdes has proved those doubters wrong. Having taken some weeks to readjust to being a No.1, the Spaniard has settled well at Boro and provided a solid presence behind a defence that has needed to be competent given their attack is clearly not fit for purpose. A relegation scrap is an experience Valdes has never had prior to this season, but the keeper will still be in the running for Boro’s Player of the Year award.

8) Eldin Jakupovic – Hull City
Things looked bleak for the Bosnian-born Swiss goalkeeper when Mike Phelan signed David Marshall in late August, despite Jakupovic playing his part in decent start for Hull. Marshall, though, had a nightmare when he took the gloves, conceding 37 goals in 15 starts as the Tigers slid down the table.

One of Marco Silva’s first acts was to restore Jakupovic to the starting XI and the keeper repaid the manager with a number of fine performances and crucial saves. Technically, there is not a lot between Jakupovic and Marshall, who was touted for Arsenal during his impressive form at Cardiff. But Jakupovic believes he is a better keeper and sometimes that makes all the difference. The fans’ favourite is a far more confident presence behind a defence that has often needed to rely on its last line. Jakupovic’s shots-to-saves ratio is 68 per cent – eight per cent better than Marshall’s – and his saves percentage from shots inside the box is better too – 59 per cent compared to 47 per cent.

7) Lee Grant – Stoke City
One of the surprise success stories of the season. Grant, now 34,  has gone from being Derby deadwood to Stoke No.1, presenting Mark Hughes with a dilemma now Jack Butland is finally close to full fitness after more than a year on the sidelines.

Butland’s injury had forced Stoke to look for an inexpensive stand-in and they found him on the sidelines at Pride Park. Grant was eager to prove his doubters at Derby wrong, something he achieved before the New Year when Stoke made his move a permanent one. With a 72% shots-to-save ratio, Grant ranks among the top five keepers, marginally better than Courtois and De Gea, despite having faced 47 more shots on target than his Manchester United and Chelsea counterparts.

6) Ben Foster – West Brom
Despite trying his luck up front in the final few minutes against Liverpool – much to Tony Pulis’s chagrin – Foster has enjoyed a successful season in his more customary position in the other penalty area. The 34-year-old has spoken of his happiness at The Hawthorns and he looks extremely comfortable in his surroundings – almost as cosy as the Baggies appear every season when they get to 40 points.

Foster has stayed injury-free this term and he has reaped the benefits of playing every week. He is a keeper perfect for Pulis; an imposing physical presence, capable of making big saves and with a left foot able to send the ball from box to box.

5) Kasper Schmeichel – Leicester City
None of Leicester’s title winners can claim to have maintained their standards from last season, but their keeper must have the strongest case. Schmeichel has remained consistent for much of the campaign, coming up with some big saves during the Foxes’ journey to the Champions League quarter-finals.

He was extremely vocal during the final days of Claudio Ranieri’s reign, though perhaps it was what he didn’t say that was most telling; that being anything to resolutely back the manager. However, even though a number of his teammates sealed Ranieri’s fate with a series of dreadful performances, Schmeichel was not among that group. The Denmark keeper has been linked with a number of clubs this summer, including Arsenal and Manchester United, but with four years left on a £100,000-a-week contract he won’t come cheap.

4) Thibaut Courtois – Chelsea
Courtois’ improvement this season mirrors many of his Chelsea teammates. Last season he was a shadow of the keeper that won the Premier League title in 2014/15, and the Belgian looked like he would far rather be in Madrid than west London.

Little has changed in his demeanour to suggest that is no longer the case, but at least Courtois seems to have realised that if he is to secure a dream move, then he is going to have to prove he deserves it. He also puts his return to form down to the arrival of new goalkeeping coach Gianluca Spinelli, having reportedly clashed with long-serving Christophe Lollichon last year.

3) Tom Heaton – Burnley
Burnley’s captain has played a pivotal role – perhaps even the pivotal role – in preventing the Clarets from ever really being dragged into the relegation dog fight, helping the club to survive in the Premier League for the first time at the third attempt.

Heaton’s success has been built on consistency and quantity over quality when it comes to making saves. Still, he has made some stunners, notably against Zlatan Ibrahimovic and Manchester United when Burnley kept a clean sheet at Old Trafford in October. The England keeper has the highest number of saves (125) of any Premier League keeper having faced the second-highest number of shots on target (165), while his shots-saved percentage (76%) is the best of all the No.1s.

2) Jordan Pickford – Sunderland
The Sunderland keeper is one of the very few positives during a dark, dark season at the Stadium of Light. It’s hard to imagine the Black Cats’ 2016/17 being any worse, but they would have probably have been relegated already had it not been for the academy graduate performing heroics between the sticks.

Pickford has earned a PFA Young Player of the Year nomination on the back of making the second highest number of saves (109) of any keeper, despite having missed 10 games. Having kept out 72 per cent of the 148 shots he has faced, he trails only Tom Heaton and Hugo Lloris, despite playing behind an absolute shower all season. Pickford will have a big decision to make this summer, as the only thing surer than Sunderland going down is that their keeper will be inundated with offers to stay in the top flight.

1) Hugo Lloris – Tottenham
The Premier League’s best defence has at its rear one of the division’s top two keepers and that’s no coincidence. Lloris has not had a stand-out season, but that’s only because he retains impeccably high standards year in, year out. As Daniel Storey wrote while extolling the virtues of Toby Alderweireld, Spurs’ central defenders’ excellence continues to be taken for granted, if not overlooked, and the same can be said for their goalkeeper.

Lloris ranks second behind Tom Heaton, having saved 75 per cent of the shots he has faced. But Lloris is much more than a shot-stopper. He has swept up behind his back line more often than any other keeper in the league, with his anticipation so often thwarting attacks before they lead to an attempt on goal. Lloris is similar in this respect to Manuel Neuer and, though he may be rather more conservative than the Bayern Munich keeper, the France captain certainly belongs in the top bracket of the game’s finest goalkeepers.