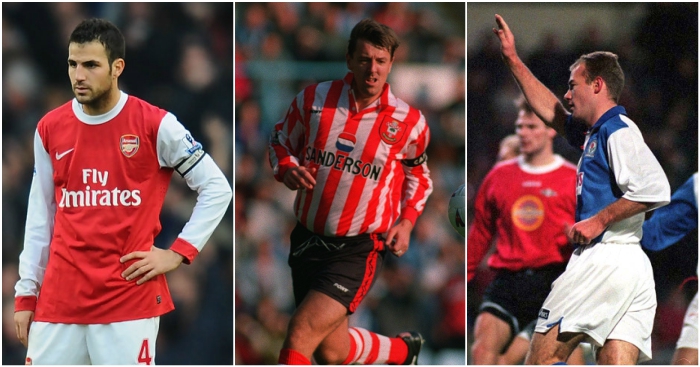 10) Nigel Martyn (Leeds United) – 1996/97
Before he became a Twitter celebrity for that single glorious favourited tweet, Nigel Martyn was a ruddy great goalkeeper. Earning 23 England caps in an era of David Seaman, Tim Flowers and erm, Ian Walker was no mean feat.

In the summer of 1996, Martyn joined Leeds United from Crystal Palace. His form in that first season was supreme, saving Leeds from likely relegation. They scored just 28 goals and finished four points above the bottom three, but conceded fewer goals than champions Manchester United (and had the fourth best defence in the league).

That was not solely down to Martyn, but his consistency was still astonishing. He kept 11 clean sheets in Leeds’ final 17 league games, including a run of seven in eight matches.

9) James Beattie (Southampton) – 2002/03
England have a record of calling up big centre forwards, only to realise that they aren’t quite good enough on the international stage. But Sven-Goran Eriksson was given little choice than to hand Beattie an opportunity, given his goalscoring form in 2002/03. Five caps would come in the space of nine months, before Beattie was omitted from the Euro 2004 squad to signal the likely end of his hurrah.

Still, it was quite the hurrah. Beattie scored 23 times in the league 2002/03 for a middling Southampton team under Gordon Strachan. They lost just two home games all season, against Manchester United and Liverpool, while Beattie went on an extraordinary run between October and April.

In those five months, the centre forward scored 23 goals in 26 games. He was prolific against non-elite teams (17 of the 23 goals came against bottom-half sides), but still made himself a considerable nuisance against the best defences in the country. Not bad for a kid who only ever wanted to be a surgeon and only started to play football properly at the age of 14.

8) Juninho (Middlesbrough) – 1996/97
Five or six years ago, I wrote a piece for this site in which I touted Juninho as the most important signing in the history of the Premier League. For the first time, a prodigious foreign star was not just joining one of the country’s London elite, but a newly-promoted team in an unfashionable part of the country. He opened the floodgates.

What’s more, Juninho bought into Middlesbrough as a football club, town and community. He became a cult hero not just through his skill level in times of adversity, but his spirit and personality. Everybody loves a smiling footballer, and Middlesbrough supporters loved Juninho.

Sadly, Juninho couldn’t do it all. Middlesbrough lost FA Cup and League Cup finals, and the Brazilian famously cried on the pitch after relegation was confirmed. He would leave for Atletico Madrid, but return twice more to his adopted home.

“We are now seeing a huge improvement in his game,” said Gary Neville in December 2014. “He is winning United match after match, which is what I expect from a United goalkeeper. He has now become a great goalkeeper.”

Thank goodness for the administrative failure that would soon follow on Deadline Day.

6) Fernando Torres (Liverpool) – 2007/08
Wind back to March 2008, and it would be difficult to believe that Torres would only score 45 league goals between January 2010 and March 2018 and the ages of 25 and 33. Here was the Bright Young Thing of European football, a striker who had left Spain for England and made life in the Premier League look easy at the age of 24.

Torres was exceptional during that first season. He became the first Liverpool player for over 60 years to score hat-tricks in consecutive games at Anfield, and later became the first Liverpool player for over a decade (since Robbie Fowler) to score 20 times in a league season. Torres missed out to Cristiano Ronaldo and Cesc Fabregas for the individual gongs, but one thing was clear: Liverpool finally had their Michael Owen replacement.

It would be the only time in Torres’ career that he scored 20 goals in a league season. Liverpool’s prince became Chelsea’s enigma and Atletico’s fallen hero.

5) Patrick Vieira (Arsenal) – 1998/99
Manchester United’s domestic dominance left every other club in the shade in 1998/99, but Patrick Vieira deserved better. At the age of just 22, he established himself as the future of European football’s central midfielders, with the stamina and physical presence to protect Arsene Wenger’s defence and contribute to the attack.

Arsenal’s 1998/99 season was extraordinary. They conceded only 17 goals in the league – the second fewest in Premier League history – and yet finished second in the league. They were a missed penalty away from reaching the FA Cup final, and yet somehow finished behind Dynamo Kiev and Lens in their Champions League group, failing to beat either side.

Vieira was the high point, those comically long legs eating up the turf as he glided from defence to attack again and back.

4) Cesc Fabregas (Arsenal) – 2009/10
Fabregas’ 2007/08 at Arsenal was The One With All The Assists, but he was named Young Player of the Year at the end of that season. In any case, many Arsenal supporters would argue that 2009/10 was the best season of his career in any case.

It’s hard to argue. Fabregas contributed 15 goals and 13 assists in the league at the age of just 23, topping Arsenal’s statistics by both measures. More important still was the leadership and maturity demonstrated to drag Arsenal to third place despite the under-performance of those around him. We may remain patriotic about such characteristics, but Fabregas was pulling off a John Terry or Steven Gerrard move.

It was a campaign that would ultimately convince Barcelona to sign him a year later having won the World Cup with Spain, although player and club pushed hard for the move in 2010.

3) Kevin Phillips (Sunderland) – 1999/00
There is a history of promoted strikers holding their own in the Premier League. Andy Cole would have made this list were it not for his Young Player of the Year award and Marcus Stewart was unfortunate not to, while more recently Andrew Johnson, Rickie Lambert, Grant Holt, Callum Wilson and Troy Deeney have all acclimatised quickly to life in the top flight.

But nobody beats Phillips. Having scored 23 goals (eight fewer than top scorer Lee Hughes) for a Sunderland team that won the Championship by a whopping 18 points, Phillips won the Premier League and European Golden Boots in his first ever season in the top tier. Given the financial bloating towards the top of the division, it would be astounding if any player from a promoted club was ever the Premier League’s top scorer again.

Phillips’ total of 30 goals included eight braces and a hat-trick. It’s fair to say he cashed in against the weaker sides (14 of his 30 came against teams that finished in the bottom six), but when you’re scoring seven more goals than Alan Shearer in one fewer game, who really gives a stuff? Eight England caps would follow, each without a goal being scored.

Blackburn quickly fell away after winning the title. Kenny Dalglish moved upstairs and was replaced by Ray Harford, a well-meaning and kind man but not the right manager for the job. The Champions League campaign was shambolic, and only a run of four wins in their last five league games took Blackburn up into seventh after harbouring genuine relegation concerns as late as December.

Amid that uncertainty, Shearer’s season was monumental. He scored 31 times in just 34 games, the best goal-per-game record in the top flight since Jimmy Greaves in 1961. The following is a video of every league goal Blackburn scored that season. Over half of them are by one man. He was the perfect English striker:

1) Matthew Le Tissier (Southampton) – 1994/95
Or indeed any of Le Tissier’s seasons in the mid-nineties. But I’ve gone for 1994/95, on the basis that it was Le Tissier’s highest-scoring season as a professional player. And the small matter that he was the only player with two nominations in the Match of the Day Goal of the Season competition, including the winner.

Le Tissier scored 19 league goals that season, but his second against Blackburn Rovers effectively boils down his entire career into six seconds. Watch the slow pace of the dribble, demanding greater skill to beat opponents without the element of speed. Watch the vision to spot Tim Flowers slightly off his line. Watch the way in which Rovers supporters, with the game still in the balance at 3-2, clap Le Tissier’s magic.