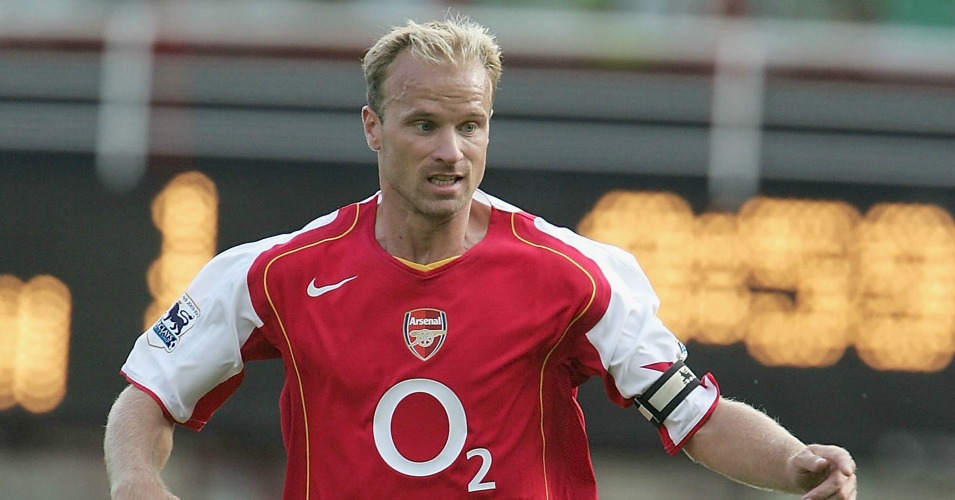 Important note: By my own (hastily made up) definition, the perfect b*stard must blend casual violence, general unpleasantness and actually being really good at football. It’s not enough to simply be a d*ck. That’s why John Fashanu, Billy Whitehurst, Paul Dickov and Kevin Davies sadly missed out.

10) Dennis Bergkamp
There was some discussion on this one, but Bergkamp pips Craig Bellamy to the final spot on the list. He is included for services to a certain type of bastardry, namely one that is covered up expertly by wonderful ability.

The party line is that Bergkamp was not a naughty boy, certainly according to Arsene Wenger. After his striker was charged for stamping on Blackburn’s Nils-Eric Johansson in 2002, Wenger described the incident as a “nervous reaction”. We’ve all been there.

“He was quite naughty sometimes,” remembers former teammate and professional Tory Sol Campbell. “I mean, if he wanted to be naughty he could be naughty. Like putting the foot in big time. When he put his foot in, he put his foot in.” The italics in that quote make Campbell sound like he’s talking in some weird Pinter-esque play.

9) Didier Drogba
Drogba is an icon off the field. He pleaded for and achieved peace from a five-year civil war in Ivory Coast in 2006, does a phenomenal amount of charity work, is a UN goodwill ambassador and was named as one of the world’s 100 most influential people by TIME magazine for his work in Africa. He is a kind, generous and humble man.

He was also a bastard. Ten years before supporters were getting their pants in a twist about one Chelsea striker mastering the dark arts, they were doing exactly the same over Drogba. His early seasons in England earned him a reputation for theatrical falls that jarred against the physicality of his play.

After his sending-off for stamping on Thiago Motta in 2010, the Daily Mail compiled a list of Drogba’s most serious misdemeanours. They included red cards for Chelsea against Barcelona, Fulham and Manchester United, a police caution and three-match ban for throwing a coin at Burnley fans and his infamous “it’s a f*cking disgrace” rant following Chelsea’s Champions League exit to Barcelona in May 2009.

Most notable of all was Drogba’s reputation for diving, one that he hardly helped to dispel: “Sometimes I dive, sometimes I slip up. In football you can’t stay up every time.”

“I am no longer Chelsea coach, and I do not have to defend them anymore,” said Jose Mourinho in October 2008. “I think it is correct if I say Drogba is a diver.”

8) Edmundo
Edmundo is perhaps the ultimate party footballer, part striker and part hell-raiser. This is a man who had a clause in his Fiorentina contract stating that he was free to travel back for the Rio carnival every year. Feeding alcohol to a chimp was one of his least wise decisions, but there were so very many.

There were no chimps present during Edmundo’s time on the pitch, but he was hardly predictable. Seventeen clubs in 18 years was a mark of his reliability, over 200 career goals and 39 caps for Brazil an indication of his quality.

Edmundo was sent off five times by the age of 22, and by World Cup ‘94 he had pushed a referee in the face and been dropped by Brazil for ill-discipline at club level. Later that same year he was banned for 40 days after recommendations from Brazilian police after his behaviour had sparked a brawl which saw six players sent off. Six months later he was placed under house arrest for smashing television cameras after a Copa Libertadores match. The fun carried on for pretty much 15 years.

Regularly banned, constantly falling out with teammates and continuously going AWOL, Edmundo has always lived up to his nickname of ‘The Animal’. He was as hard to play with as against.

7) Mick Harford
It’s hard to believe that Mick Harford played in the Premier League. It feels like he belongs to a time before football welcomed and revelled in soap opera. As the excellent Rob Smyth wrote, ‘Harford, all dead eyes and slumbering menace, was the anti-poster boy for a generation of nails-hard centre-forwards to be forever viewed through claret-tinted spectacles.’

“His favourite trick was to come and smash you with the forearm,” Martin Keown remembers. “I had to have a nerve taken out of my teeth because he hit me so hard.” Those are an astonishing set of words, yet there is a strange fondness found in them. It’s as if Keown is looking back to a better time when footballers were real men and teeth had fewer nerves.

“Get a whack and give a whack and, clichéd as it sounds, have a beer afterwards,” says Harford of his career. Those were times when a striker could base an entire career on that simple maxim, and even earn two England caps.

6) Diego Costa
The inspiration for this list, no Premier League striker is able to convey pain and innocence quite like Costa. He is the pantomime villain, but with an act honed far beyond the level of provincial theatre.

As with every true bastard, the trick is not in the acts themselves, but the response they provoke. Costa would be a far lesser striker if opposition players, managers and supporters could just ignore his goading, but they simply can’t resist. Costa’s ability to act as a flame for very silly moths makes him invaluable. Just ask Gabriel Paulista. The video below is almost hypnotic.

You do not have to like Costa. You can find him odious, demand that he should be banned and accuse him of a thousand sorts of dickbaggery. But you can’t pretend he’s not entertaining. And you can’t pretend that you wouldn’t take him on your team.

5) Mark Hughes
There is a slight amusement to be found in Stoke’s transition from a long-ball, physical game to a more cultured style under Hughes, given his own reputation as a striker. He managed to combine wonderful technique with a physical resilience and general toughness that made him a formidable opponent.

Hughes himself plays down his physicality as a necessary part of the game: “When I was playing, people were out to stop you affecting the play. If you’re trying to play in a certain way and people try to physically stop you, then on occasions you will react. It’s no secret that I enjoyed the physical side when I was a player. I was a bumps-and-bruises man.”

There is a wonderful anecdote about Hughes from when he first started out at Manchester United. Ron Atkinson’s team were playing Juventus and Hughes was facing Claudio Gentile, one of the hardest men in the history of the sport. Having been kicked by Gentile early on in the game, Hughes – then 19 – simply kicked him back harder. At the end of the game, Gentile approached Atkinson and told him that Hughes was a fine prospect. Lovely stuff.

4) Luis Suarez
Being racist to an opponent comes under the banner of abhorrent behaviour rather than bastardry, but biting, feigning injury, rolling around on the turf and pressing studs into the Achilles tendon of an opponent all counts. The service Suarez gets at Barcelona means that much of his off-ball naughtiness has been eliminated, but we still remember.

The archetypal image of Suarez’s time in England is not of a goal celebration, but of a pained expression towards an official, only the slow-motion replay confirming him as offender rather than victim. It was a well-honed act.

For two seasons Suarez was the Premier League’s villain-in-chief. For two years he lived off the negative energy, photosynthesising it into goals. The more you hated him, the better he got.

3) Duncan Ferguson
There is a running joke on this site which suggests that Duncan Ferguson is deliberately left out of our top ten lists. Unfortunately, I could carry it on no longer. He was a certainty for this list.

There is a school of thought that Ferguson never reached his potential, hamstrung by his own temper, yet he was also incredibly unlucky with injury. Everton physio Mick Rathbone said that he had never met a footballer with such a high pain threshold after Ferguson’s recovery from a serious calf operation in August 2000. Rathbone was stunned that Ferguson was able to carry on playing. In any case, 69 Premier League goals is not to be sniffed at.

At best we can call Ferguson competitive, but frankly it’s a euphemism for ‘unhinged’. The striker gained nine red cards and a three-month prison sentence for his on-field actions. This excellent account of the hours before his first Merseyside derby indicate a player who was in need of special attention. Off the field Ferguson got the care he needed; on the field, Everton were happy just to get him playing.

There is no doubt that Shearer’s greatest strength was his finishing (I recommend clicking here and then the related videos to watch every one of his Newcastle goals), but he was also happy to fight tough and fight dirty. He used his elbows as a strategic weapon, while Neil Lennon felt the force of his boot.

“People say I bully defenders, but this way I play is something I have learned over the years,” said Didier Drogba in 2012. “I modelled myself on Alan Shearer. He was an example to me.” One glorious bastard inspiring another. It brings a tear to the eye.

1) Hristo Stoichkov
You don’t get named ‘The Dagger’ and ‘The Gunslinger’ without being able to handle yourself, and Stoichkov could do so more than most. He was the bad boy that it was okay to love.

Stoichkov was banned from football for life in 1985 for fighting (obviously reduced on appeal), and banned for standing on a referee’s foot at Barcelona. He treated opposition players with the same level of disrespect.

“Football is simple,” Stoichkov said. “You just need to have the right mentality, fighting in every game, in every practice and for every ball.” A record of 352 career goals indicates that his fights usually ended with him victorious.

For more on Stoichkov, you can read his Portrait piece here.