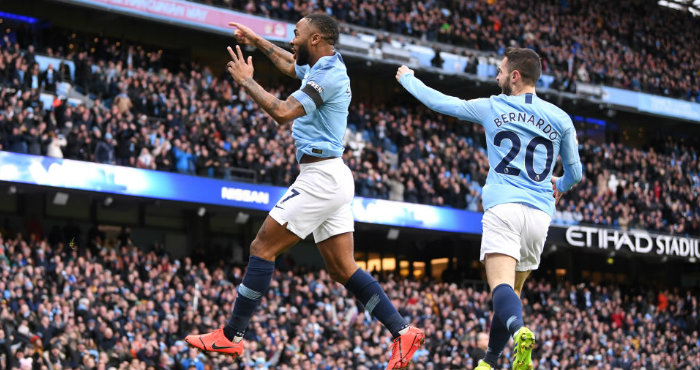 If you’re in a bit of a bad mood, you might prefer to check out our list of the ten players who have regressed the most instead…

10) Moussa Sissoko
Where’s this fella come from? The midfielder was largely poor in his first two seasons for Spurs after joining from Newcastle in the summer of 2016, but missing out on France’s World Cup-winning squad seems to have lit a fire under the 29-year-old, who has become a marauding and skilful presence in the Tottenham midfield.

Last season he played 90 minutes in the league just six times, much more often being hooked midway through the second half or coming on for a brief but hilarious cameo. So far this year, he has made himself close to indispensable for Mauricio Pochettino’s side, going the full distance in 16 Premier League games and playing 80-plus minutes in a further five. The games he has missed have nearly all been enforced through injury.

Sissoko has arguably shown his best stuff in the Champions League, though, performing brilliantly against Inter and Borussia Dortmund.

My man of the match is Sissoko
Brilliant all round game, including the through ball to Kane for the goal

9) Luke Shaw
Poor Luke Shaw had never really got going at Manchester United. Signed as one of the brightest prospects in English football back in 2014 – he was the youngest player from any country to appear at the 2014 World Cup – the left-back is halfway to a testimonial but entered the season with everything to prove after years of injury nightmares.

Jose Mourinho was incredibly public with his browbeating of Shaw, but he did at least bring him back into the fold at left-back this season, selecting him more often than not. He has missed just two games under Ole Gunnar Solskjaer’s management, and the caretaker says he is “delighted” with him. As well he might be. A promising career looks to be back on track.

8) Ryan Fraser
Unavoidably referred to as a ‘pocket rocket’, the Scottish winger has given Bournemouth fans a few pocket rockets of their own. That’s a normal response to someone being good at football, right?

Across the 2016/17 and 2017/18 seasons, Fraser made 54 appearances, scored eight goals and set up 11. So far this season, he has made 31 appearances, scored six and set up ten. His early-season form in particular was fantastic, with his excellent combination with Callum Wilson giving Fantasy Premier League players the world over no choice but to put him in their sides.

That’s a heck of an improvement from a player who was previously regarded as little more than a Tesco Value Xherdan Shaqiri.

7) Granit Xhaka
Hey, speaking of Swiss footballers with Xh at the start of their names…

Unai Emery may not have had the instant impact that over-demanding fans have cried themselves to sleep wishing for, but there have been certain players who have shrugged off the all-too-familiar malaise of Arsene Wenger’s latter days and shown signs of reinvigoration. Xhaka is one.

The midfielder still divides the Gunners fans, but Emery certainly seems convinced, picking Xhaka in all but a couple of the games for which he has been fit and available, even giving him the captain’s armband for a spell.

Our most improved player this season so far is Granit Xhaka. If he rectifies the silly mistakes, which he can train on then he will be a top player. @Arsenal #XhakaBoom pic.twitter.com/jpH1NTZxDF

6) Conor Coady
The only man on this list who wasn’t playing Premier League football last season, but he has made the step up from the Championship with such aplomb that we believe it is well worth recognising.

For a little while it looked like Coady would become one of the many young players to come through at a top-six club amid plenty of hype only to fall into a career of Championship obscurity.

The former England youth captain and Liverpool prospect was once touted as ‘the next Steven Gerrard’, but ‘the next Jamie Carragher’ now seems much more apt: having started as a central midfielder, he has dropped back to centre-half and enjoyed a slightly-delayed bloom.

Coady has gone from strength to strength at Wolves, leading them to promotion as captain last season and taking to the Premier League like a duck to water as they have enjoyed a precipitous rise to European contention. Still no England call, but if he keeps rising to challenges as he has, that’s surely not too far away.

Conor Coady has got to be the most improved player in English football in the past 3 years. Revitalised career.#WOLLIV

5) Alex Iwobi
The second Arsenal name on this list, Iwobi has spent this season dispensing with the ‘Arsenal youngster who will never quite fulfil their potential’ vibe that has blighted the careers of Kieran Gibbs, Jack Wilshere, Theo Walcott and more besides.

At 22 years old, Iwobi is starting to show the kind of improvement that is exactly becoming of his age. The man himself has put that down to the performance analyst who has been working with Iwobi at Emery’s behest, and while his decision-making is far from flawless, he has come on leaps and bounds from the player who would consistently run into blind alleys in previous campaigns.

4) Georginio Wijnaldum
It’s a bit weird that Newcastle even got relegated in 2015/16, isn’t it? But then I suppose both Sissoko and Wijnaldum are on a ‘most improved’ list for a reason.

Wijnaldum has been pretty good for Liverpool since joining in 2016, in fairness, but the way he has upped his game this season has been really impressive.

With Jordan Henderson wearing the captain’s armband and Naby Keita the new big-money signing, you would have been forgiven for expecting the Dutchman to disappear into the shadows. Instead, he has kicked on impressively and established himself as a firm favourite of both Kop and Klopp. Hey, those words are similar! Incredible that nobody has never noticed that before.

3) Declan Rice
West Ham are the most improved side in the Premier League compared to where they were a year ago, and Manuel Pellegrini’s decision to switch Rice from central defence to holding midfield has been a huge part of that.

The 20 year old is surprisingly mature in the role, rarely getting caught committing fouls and instead making a name for himself as one of the best ball-winners in the Premier League.

That’s pretty damn impressive for a player who started the season as a teenager playing in a completely different position – and for a different country, but we’ll leave that particular hornet’s nest unpoked.

2) Bernardo Silva
We’re firmly into the “yes these guys were already pretty brilliant but f**k me they’re just ridiculous now” part of the countdown, and in case you hadn’t already guessed from the image at the top, they’re both Manchester City players.

We had started to worry a little bit about how Bernardo Silva would force himself into the City first team: it’s not like they were short on wingers, after all, and while he made 35 Premier League appearances last season, he was averaging just 43 minutes per game.

This year, he’s been playing at a rate of 79 minutes per game – and surprisingly, spent a good portion of the campaign playing and excelling in central midfield during Kevin de Bruyne’s absence.

The Belgian’s return has pushed Bernardo back onto the wing, but the ability he exhibited has clearly been proof enough for Pep Guardiola that he can shine even in a team full of stars.

Citizens, send in your thoughts in regards to who you think City's POTY is so far.

In my opinion, I have to go with Bernardo Silva. The improvement in his game from last season and his work rate off the ball has been exceptional. What a season he is having! pic.twitter.com/C7WjPA78ud

1) Raheem Sterling
Very much the man of the hour, but rightly so. Sterling was number four on our list of the best Premier League players of 2018, and must surely be in pole position to take that accolade for this year.

Having turned 24 in December, Sterling should have been just starting to enter his prime, and he has completely lived up to that. This is no longer a promising youngster living in the shadow of more talented older teammates like Luis Suarez or Sergio Aguero, but the real deal: a player who knows not only how dribble, but when and where to; and most crucially, he is developing an unerring ability to put himself in the right place at the right time.

Sterling has 15 goals and nine assists in 27 Premier League appearances this season. To be involved in close to a goal per game is ridiculous, and no player in the division can better that combined contribution. Allegations that Sterling had no end product were always harsh at best, but now they would be absolutely ludicrous. But then Sterling is making a bit of a habit of proving the doubters wrong…