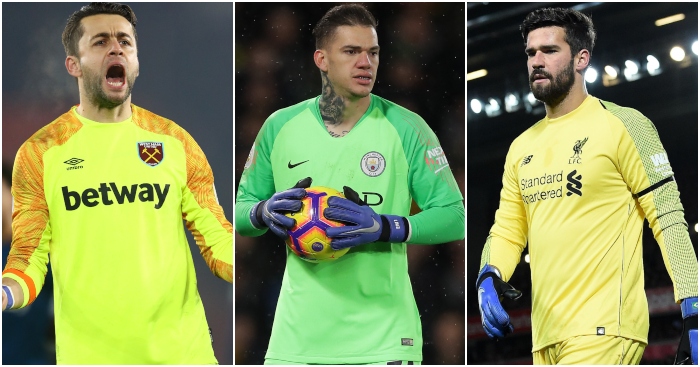 10) Vicente Guaita (Crystal Palace)
Palace pursued the 32-year-old for months before finally landing him on a free upon the expiry of his contract at Getafe. Unfortunately for Guaita, it was his signing of a pre-contract agreement last February which provoked Wayne Hennessey to finally get his act together in the Eagles’ goal.

But Guaita has bided his time, probably confident in the knowledge that Hennessey would let the gloves slip from his grasp eventually. The former Valencia keeper is now in possession of the starting berth and, perhaps partly because of the time he has had to get used to the English game, Palace look more secure as a result. In 15 games, Guaita has the best save percentage (77% – Hennessey’s is 62%) of any keeper in the Premier League.

Finally, a good signing. It took a while but on a free transfer from Getafe, this signing has proven a coup. An outstanding shot-stopper, Palace finally addressed their biggest problem. Not to mention how quickly he bought into the club.

9) Martin Dubravka (Newcastle)
Few clubs had more first-team goalkeepers than Newcastle last term, but prior to Dubravka’s arrival in January last season, none of them could nail down the starting spot. Dubravka’s form has been impressive enough to finally give the Magpies an undisputed No.1.

The Slovakia stopper has been as solid off his line as he has on it. Dubravka has made 36 high claims this season – six more than anyone else and double the number of all but Ben Foster, Lukasz Fabianski, Asmir Begovic and Jonas Lossl. The 30-year-old’s performances have earned him enough credit with Rafa Benitez to cope with a wobble in the new year when questions were asked after goals conceded to Man Utd, Wolves and Tottenham, while interest from Juventus is just another endorsement that Newcastle could do without.

‘Juventus have Newcastle goalkeeper Martin Dubravka on their radar after his recent displays this season’ pic.twitter.com/1TffSmekQi

8) David De Gea (Manchester United)
It’s been a weird season for the Manchester United No.1. Playing behind a defence in utter disarray for the first half of the campaign – after a wretched World Cup with Spain – De Gea managed only two clean sheets in the opening 20 games of the Premier League season. United’s struggles were certainly not his fault and, much like the last five years, things could have got even worse at Old Trafford had it not been for the Spaniard.

His performance in the 1-0 win at Tottenham, where he made 11 saves in the second half, was perhaps the finest of any goalkeeper in the Premier League this term. It further intensified the clamour for United to give De Gea whatever he wants to sign a new contract, with a couple of less impenetrable displays of late – at Arsenal and Wolves – doing nothing to dampen it.

David De Gea’s highlights against Spurs
WARNING ⚠️- There is a lot of them #MUFC
pic.twitter.com/ozfurOVgGv

7) Tom Heaton (Burnley)
Neither Nick Pope’s emergence as an England goalkeeper nor the signing of Joe Hart could stop Heaton from eventually reclaiming the Burnley No.1 spot after a series of injuries.

Heaton’s impact on Burnley’s back four is undeniable. Hart hadn’t been that bad, but after a run of six defeats in seven, Heaton was reinstated and the Clarets immediately went eight games without defeat – their longest unbeaten run in the top flight since 1966. Coincidence? Not according to Gareth Southgate, who recalled Heaton into his England squad for the recent qualifiers against Czech Republic and Montenegro. Some turnaround that, since last summer it seemed the 32-year-old would be the odd man out of three England stoppers at Turf Moor.

The race for the top four, er, heats up.

6) Bernd Leno (Arsenal)
Like many a foreign keeper plonked into the hustle and bustle of the Premier League, it took Leno a little while to adjust, but the German has steadily grown into his role after Petr Cech’s befuddlement with the ball at his feet forced Unai Emery into fielding his summer recruit.

Since making the starting spot his own at the end of September, Leno has been remarkably consistent, aside from a forgettable trip to Southampton just before Christmas when the absence of an extra half-inch in his reach presented Charlie Austin with an open goal, rather than simply a sitter from point-blank range. If Arsenal fans still needed convincing over their new goalkeeper, Leno’s performances against Tottenham and Manchester United last month ought to have done the trick.

Our March Player of the Month?

Well, after this, who else was it going to be? 😅

5) Rui Patricio (Wolves)
The Portugal No.1 watched Wolves’ heartbreaking FA Cup semi-final defeat to Watford from the bench, where he saw John Ruddy concede three goals from three shots on target. Gerard Deulofeu’s first looked sublime but stoppable, while his winner would most likely have been kept out by a keeper who hadn’t spent the vast majority of the season in the shadows.

Nuno’s loyalty is admirable but Patricio’s form this season suggests that had he been in the Wembley sticks, Wolves would be paying another visit for the final. His move to Molineux from Sporting Lisbon for somewhere in the region of £15million raised a few eyebrows from those who presumed the 79-cap keeper might have set his sights a little higher, but Patricio has played as big a part as anyone in helping Wolves’ push to assert themselves as the best of the rest.

4) Ben Foster (Watford)
The former England goalkeeper is a rare species in the Premier League. Foster admits football is not his great passion, and he also possesses both the self-awareness to understand his own strengths and weaknesses alongside the honesty to admit them. He accepts the demands at Manchester United during his early career “just wasn’t for me” but the 35-year-old appears to be in his element back at Watford this season.

Indeed, Foster admits he considered retiring last summer after “spending too long at West Brom” – and the Hornets are mighty glad he didn’t. Foster too. “I am so glad I came, so glad I am still playing,” he said in January, just after taking the record for most saves made in the Premier League since records began in 2006. Only two keepers – Lukasz Fabianski and Neil Etheridge – have made more this season.

3) Ederson (Manchester City)
Much like Alisson, Ederson’s cause last season was helped no end by the piss-poor standards of his predecessors. But having set his own benchmarks, the Brazil No.2 has met them again this season while offering an unflappable presence as the last line of Pep Guardiola’s defence and very much the first line of his attack.

Ederson is the only keeper in the Premier League with an assist to his name this season, while the 25-year-old also has another in the Champions League. His range of passing is unequalled among his goalkeeping peers and his coolness in possession while strikers hurtle towards him is ridiculous to the point of requiring a psychological examination.

But aside from the eye-catching possessional play, Ederson is bloody good at the more traditional jobs a goalkeeper still must undertake. The ability to drop a 70-yard drive onto Sergio Aguero’s big toe means nothing if his grip is a greasy as Claudio Bravo’s. He is just one of two keepers to have started more than 16 games without making a single error that has led to a goal. Kepa does not instil quite the same confidence, mind.

2) Lukasz Fabianski (West Ham)
As impressive as many of the keepers on this list have been, not many are in contention for their club’s Player of the Year award. Had it not been for the emergence of Declan Rice, Fabianski would have had Hammer of the Year sewn up by Christmas.

The Poland stopper was one of the bargains of the summer when the Hammers took him from Swansea following their relegation. Because West Ham were busy breaking their transfer record on a monthly basis, Fabianski’s arrival for £5.5million went somewhat under the radar. But anyone who watched the Irons last term knew that, as well as a new manager, they desperately needed a solid goalkeeper.

Fabianski has been exactly that. The 33-year-old might not be one of the new breed of goalkeepers who takes as much pride from Cruyff-turning a striker on his six-yard line as he might from plucking a ball out from the top corner of his net, but West Ham don’t need Franz Beckenbauer in their goal. Fabianski has made more saves than any other keeper and his consistency combined with a number of point-preserving stops has made him one of the best No.1s in the Premier League, which seemed most unlikely when he left Arsenal with his reputation in bits.

1) Alisson (Liverpool)
The Brazil No.1 was identified as our signing of the season so it is only right that he retains his No.1 spot in this list too. In truth, though, Alisson hasn’t been absolutely brilliant, because he hasn’t had to be. Virgil van Dijk has seen to that. And there have been a few errors along the way which, fortunately for Liverpool, haven’t been capitalised upon or, when they have, haven’t cost Liverpool too greatly.

But Alisson is so, so much better than the panic-inducing keepers Liverpool fans have been subjected to in recent years. Jurgen Klopp paid a then-world record fee and the former Roma stopper has been worth every penny for adding an air of impenetrability around the Reds’ rearguard. Alisson has kept the most clean sheets, conceded the fewest goals and retains the highest save percentage. Van Dijk or no Van Dijk, Liverpool wouldn’t be where they are without Alisson.

A massive moment in this game, you feel. Not only is Jesse Lingard denied by Alisson superbly, but the #MUFC forward (who had to come on to replace the injured Mata) now has to come off injured. No luck for Man United with injuries#MUNLIV 0-0 #PLonNBC pic.twitter.com/uE62A9WvPN