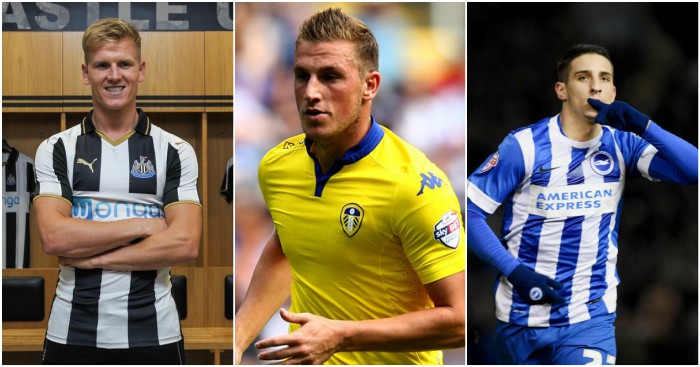 10. Liam Moore (Reading)
Due to our website’s cavalier approach to archiving, it has thankfully been consigned to history, but I once included Liam Moore on an England Euro ladder. Having come through Leicester City’s academy, he broke into Nigel Pearson’s team at the start of 2014/15 at the age of 21, and looked a composed, assured central defender. He then became a regular for the England Under-21s.

It didn’t work out well. Moore dropped out of Leicester’s first team, was loaned out to Brentford and Bristol City and then not even given a squad number and told to train with Leicester’s Under-21 team in pre-season. Eventually joining Reading on a four-year deal, Moore is finally in the form that saw him impress in the top flight.

“I could have stayed there, gone out on loan and I could have still had that tag over my head of being a Premier League player,” Moore said. “I could have had all the comforts of being able to go back to Leicester, knowing I would be there for another three years with the contract they offered me. But I’ve not been brought up like that. That’s not the sort of person I am. I want to go there and earn my rewards and earn respect in the game. I’m only going to do that by playing regularly.”

That’s exactly what you want to hear from a young player. Good luck to you, fella.

9. Tammy Abraham (Bristol City)
It’s hard to see players like Abraham ever breaking into Chelsea’s first team. At the age of 19, the forward was the stand-out player in Chelsea’s youth team that won the Champions League in 2014/15 and 2015/16, but has played just 53 minutes of Premier League football. The more relevant question might be how far the apple falls from the tree.

On this evidence, Abraham’s next loan deserves to be in the Premier League. There have not been many bright points in Bristol City’s season battling relegation to League One, but without Abraham they would already be dead and buried. Eighteen league goals at the age of 19 will make plenty of mid-table top-flight clubs wonder if a £10m bid is worth tabling this summer. We’ll say less about the recent arrest for driving without licence or insurance.

8. Matt Ritchie (Newcastle United)
Ritchie has not been at his absolute best since arriving from Bournemouth last summer, but he is potentially the finest player in the Championship. Even at 90%, the Scotland international has scored nine league goals and assisted seven more, and been an integral part of Newcastle’s automatic promotion campaign.

Moving from the Premier League to the Championship after years of work to reach the top flight might seem like an unambitious move, but Ritchie has spoke of his desire to be part of something special at St James’ Park, and was headhunted personally by Rafa Benitez.

“I was talking with a lot of people; talking about a lot of options, of different players, and Ritchie was one of the first names,” Benitez said in January. “He is one player that if you sign him, you know you are right.”

High praise, and one of a select few in black and white that truly can be trusted in the Premier League should Newcastle achieve promotion.

7. Keiren Westwood (Sheffield Wednesday)
Now 32, Westwood’s career has been an exercise in just-not-quite. The goalkeeper has as many international caps for Ireland as he has Premier League appearances, which is just a bit weird.

Now at Sheffield Wednesday, Westwood has found his best form. Named in the PFA Team of the Year in 2014/15 and a contender last season, he was linked with a move to Aston Villa in the January window and two Premier League clubs last summer. This season, Westwood has been almost faultless as Wednesday look to go one better than last season and progress through the Championship play-offs.

6. Tom Cairney (Fulham)
Cairney is one of those players who must have off days when I’m not watching, because every time I see him play he is the best player on the pitch. Born in Nottingham, he is a product of Leeds’ youth system who had five years at Hull before joining Blackburn, initially on loan. Now at Fulham, he has a knack for scoring spectacular goals but only one player has registered more Championship assists this season. The list of chance creators is even more ridiculous: The gap between Cairney (98) and second place is a full 21 chances.

One person definitely in my camp is George Boateng, who predicted big things for Cairney in 2010:

“I hope he stays grounded because he’s a tremendous talent and if he works on his game, he’ll be an England international – he’s that good. It’s a big statement but I said this with Stewart Downing when he was 17 at Middlesbrough. In the future I want to be sat at home and say to my kids ‘You see that boy wearing the England shirt? I played with him.’ That would be a very proud moment for me.”

Well he does have a few Scotland Under-21 caps…

5. Chris Wood (Leeds United)
Robert Earnshaw. Jordan Rhodes. Ross McCormack. Danny Graham. Sylvan Ebanks-Blake. Nathan Ellington. Cameron Jerome. David Nugent. This is the unfortunate band of brothers – the strikers who are good enough to thrive in the second tier but not talented enough to even survive in the top flight.

Until this season, Chris Wood would have justified inclusion in that list. Yet his goalscoring record at Leeds has been so impressive that a Premier League club may well be tempted into testing the theory this summer, should Leeds not gain promotion. He is the current top scorer in the division.

Wood is also somehow only 25, despite playing his first Premier League game in April 2009. He has had loan spells at six different Football League clubs, but finally found a happy home at Leeds. 35 goals in 70 league games have followed. Is this the start of a new norm, or a brief purple patch?

4. Conor Hourihane (Aston Villa)
Hourihane would have been forgiven for believing that he would never quite make it. Having come through Sunderland’s youth system, the Irish midfielder left the club having never made an appearance to join Championship Ipswich. Hourihane then failed to make a single league appearance at Portman Road, and was released after just a single season.

Making his professional debut just a few months before turning 21, Hourihane hasn’t look back since. After catching the eye at Plymouth he joined League One Barnsley for £250,000 and gained promotion to the Championship in 2015/16.

Hourihane might not have been the best player in the Championship this season, but he was certainly the most surprise performer. By the end of January, a midfielder twice released had signed for Aston Villa for £3m.

3. Aaron Mooy (Huddersfield Town)
With the warning words of my lovely, kind, generous editor ringing in my ears, here comes Huddersfield Town’s entry in this list. Christopher Schindler and Izzy Brown were both shortlisted, but it’s Australian Mooy who most merits praise in the midst of Huddersfield’s tremendous team effort.

There were plenty of raised eyebrows – and cynicism – when Manchester City signed Mooy from their sister club Melbourne City, but his coaches at Huddersfield truly believe that the midfielder has the ability to flourish in the Premier League.

“For me, he can play at the top level,” said Andy Hughes. “I’ve been lucky enough to work with players that have played in the Premier League and he’s got more than them — I really believe that. They’re hard to find, those ones, they’re hard to find and you know we’re quite lucky.”

2. Dwight Gayle (Newcastle United)
Of the 13 players to score more than ten Championship goals this season, 12 have played more than 2,000 minutes and eight have played more than 2,500. The exception is the man in second place, with 21 goals. Gayle has scored once for every 91 minutes played in the league this season. Only regular injuries have stopped him from already reaching 30 goals.

There are plenty of Crystal Palace supporters who believe that Gayle was not given the chances his talent deserved at Selhurst Park, and the striker should get a chance to rub his former club’s nose in it next season. Yet he is one a number of players in Newcastle’s squad over whom there are question marks about their ability to thrive in the Premier League. Actually, scratch that: Almost every one of Newcastle’s squad has a question mark over their ability to thrive in the Premier League.

1. Anthony Knockaert (Brighton and Hove Albion)
These lists are almost always subjective and often create a great deal of disagreement (I’m sorry, I’m not perfect) but there can be no real disagreement with the player at No. 1. Brighton’s first entrant on our list is also the most deserving of individual praise. Knockaert is a Premier League player in all but technicality, and that will surely change one way or another this summer.

The Frenchman’s output since arriving in January 2016 has been astounding, with 18 goals and 13 assists in a team pushing for promotion. Had Knockaert been signed in the summer of 2015, Brighton would already be in the top flight. As it is, the winger’s contributions look set to address that situation this season.

Knockaert’s excellence stems from a rare combination of flair and consistency. He is both a moments player and reliable over the course of a season, while also avoiding the regular injuries that many with his frame and characteristics can pick up. There is still a question about his ability to perform in the top tier, but Knockaert at least deserves the chance.