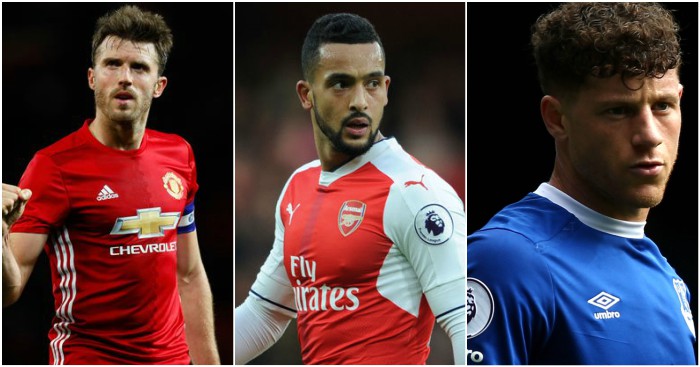 Last week we did players that shouldn’t have been let go. Now it’s the vice versa…

10) Ibrahim Afellay (Stoke City)
There are Premier League players there is little point in selling, because their age, reputation or form would make a transfer fee so measly that the club would not want to sell, and the interested suitors would be so unappetising that the player would not want to move.

Yet Afellay is a little different. He is 31 and has suffered regular injuries, but you can bet that there would be a club in Turkey or China that would be prepared to pay £6m-plus for him simply because he once played for Barcelona.

Instead, Stoke persuaded Afellay to sign a new deal in March that sees him through to the end of the 2018/19 season, will continue paying him £40,000 a week and yet have given him 61 minutes of first-team action in all competitions this season. Which makes you wonder what the point of the whole exercise was.

9) Aleksandar Mitrovic (Newcastle United)
On his day, Mitrovic is both a goalscorer and a menace to every defence. On every other day, he is a nuisance to his own manager. Newcastle United simply cannot afford to risk a red card or enforced substitution to avoid one just because Mitrovic has allowed himself to be wound up by a defender. And so he stays in the shadows.

After the arrival of Benitez, Mitrovic had an extra barrier to the first team. Rafa has always preferred to make a team solid before allowing them to be expansive, and was always likely to play with one central striker. With two wingers happy to run beyond the last man, Benitez bought Joselu who can play with his back to goal effectively. It is not a job Mitrovic can do.

The chances are Mitrovic will leave in January, a cult hero at St James’ Park but a manager’s nightmare. The only surprise is that he didn’t go six months earlier.

8) Sam Byram (West Ham)
The alternative working title for this list is ‘Premier League players you forgot existed’, and by that measure Byram is possibly top. In Charlie Taylor and Byram, Leeds United sold their two exciting, young left-backs to Premier League clubs. So far they have made a combined 15 league starts in 23 months.

Byram’s situation is far worse than Taylor’s. He is part of a squad that regularly concedes more goals than it would like and is being kept out of the side by the ageing Pablo Zabaleta. So much for thinking of the future.

Given that West Ham signed Zabaleta this summer on big wages and are yet to give Byram a league minute, would they not have been better off getting some money for a 24-year-old who still has the chance to save his Premier League career?

7) Charly Musonda (Chelsea)
“With young players, it is important to speak with him and try to explain which is the right way and I did this,” said Antonio Conte when asked about Musonda’s Instagram rant on not playing for Chelsea. “I am sure about his career because he is a talented player, if his attention is more on the pitch, not on social media.”

How to lose friends and alienate managers. You can see Musonda’s point that he has a minuscule chance of breaking into Chelsea’s first-team squad this season and only a marginally better chance of ever doing it.

You can even question whether his club actually want him to break through, or merely whether they would rather he be sold for a profit like so many other young players who were recruited from abroad between the ages of 15 and 18. Yet for that to happen, Musonda has to be loaned out first. Having spent the season at Real Betis in 2016/17, what is the benefit of stagnating his development with meaningless Under-23 matches?

6) Brahim Diaz (Manchester City)
Having signed a three-year professional contract in 2016 and been the subject of serious interest from Real Madrid, there are big things expected of Brahim Diaz. His problem is that he is an 18-year-old attacking midfielder in a squad that boasts Leroy Sane, Raheem Sterling, Bernardo Silva, Kevin de Bruyne and David Silva. It’s less a question of wishing Diaz good luck and more telling him not to get his hopes up.

Given Jadon Sancho’s decision to leave City for Borussia Dortmund, where he has already played in the Bundesliga at the age of 17, Guardiola will be wary of Diaz doing the same. So wouldn’t it have made sense to send him on loan for the season to La Liga and improve his development in first-team matches? As it is, the Carabao Cup is likely to be his only football before turning 19.

5) Michael Carrick (Manchester United)
“I am delighted that my journey with this great club is going to continue. My focus now is looking ahead to my testimonial match next Sunday.”

You hope that Carrick enjoyed that testimonial, because this season has been a disaster. Jose Mourinho has twice dismissed reports that he is nearing full fitness, and the story this weekend was that he hadn’t even been seen at the club’s training ground for days. His only appearance was in a League Cup victory over Burton.

It’s hardly the worst thing in football to give senior players one final deal, but Mourinho is not a manager who has founded his reputation on niceties. Giving a 36-year-old a new £80,000-a-week contract smacked as unnecessary at the time, and that hasn’t changed. Carrick may be a fine example to have around, but Manchester United aren’t paying him a £4.2m basic annual salary for brief chats with young players. Or at least they shouldn’t be.

4) Ahmed Musa (Leicester City)
Probably the one player on the list who most needed the move. Claudio Ranieri signed Musa for the Premier League champions for a club-record fee of £16m. Since then, Leicester have fallen back down to earth, the club have sacked two managers and they have signed three players for higher fees than Musa. Two of them were forwards.

Not only has Musa not scored a Premier League goal since October 2016, he hasn’t even started a league match since February. Ranieri soon didn’t fancy him, Craig Shakespeare certainly didn’t fancy him and Michael Appleton didn’t name him in his first match-day squad. A promising career is in tatters.

Most strange is that a deadline-day loan move to Hull City broke down because Musa wanted to prove himself at the King Power Stadium. The club should have made certain earlier than the last day of the summer that the Nigerian would be leaving, on loan or permanently.

3) Ross Barkley (Everton)
The news that Ronald Koeman has finally been sacked by Everton will come as a source of great joy for plenty of Everton’s senior players, but you do wonder about Barkley’s frame of mind. The last time he played a league game, Everton were seventh in the league, managed by Koeman and he was off to Chelsea or Tottenham in the summer so didn’t give two hoots.

That it was reportedly Barkley himself who called off the move to Chelsea will remain a mystery, but he claims that his injury made him consider his options. Quite why he decided to go down to Chelsea in the first place is unclear.

Yet Everton will be harmed by the whole affair. Having been due to receive £35m for a player with 10 months remaining on his contract, they will now have to settle for far less and have not even enjoyed the benefits of Barkley’s availability in the meantime. As ever, why did they not push for a deal earlier in August?

2) Danny Ings (Liverpool)
“He’s completely normal in training, that’s the best news,” said Jurgen Klopp in August on Ings’ fitness. “He’s in a very good way, the knee is perfect – that’s the most important thing of course. It was a really long time [out injured] again, so that is why he needs games, games, games.”

So far Ings has managed the singular, 17 minutes in the League Cup, but not yet the plural. Quite why Klopp kept him at Liverpool when he is, at best, their third-choice striker, is unclear. Even Ben Woodburn might consider himself ahead in the pecking order.

Ings’ problem is not just that he has been injured for the best part of two years, but that his style is not suited to Klopp’s football. Starting him requires a change of attacking strategy, which is a lot to ask when accommodating a striker who effectively needs to learn how to score goals again. Why oh why didn’t the loan move that would suit all parties come?

1) Theo Walcott (Arsenal)
He made his debut for Arsenal in 2006, and since then we’ve been asking ourselves and each other whether Walcott can truly fulfil his potential, or whether that ceiling of potential was lower than we thought. He is their longest-serving player, and that just fits perfectly. Oh Arsene Wenger and your over-exaggerated loyalty to certain players.

One thing is true: Walcott’s status at Arsenal has never been lower. He has played 27 minutes in the league this season, relegated to the rank of Europa League stalwart alongside the kids and reserves. The England career is now non-existent, and the club career is quickly catching up.

Having watched Kieran Gibbs and Alex Oxlade-Chamberlain opt for fresh starts away from the Emirates, how did Walcott not think it would be a good idea for him to do the same?