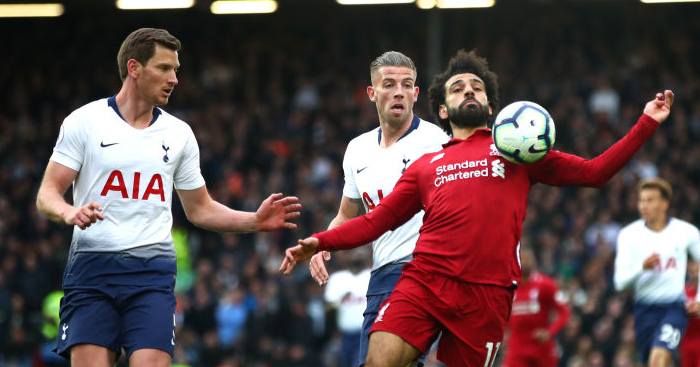 Don’t forget to get angry at our list of the ten best signings, ten best goalkeepers and ten best full-backs of the season.

10) Craig Cathcart
If you were asked to name the five highest appearance makers in Watford’s Premier League history, only a handful might spring to mind immediately. Troy Deeney (134) predictably leads the pack, followed by players with previous top-flight experience in Etienne Capoue (123) and Heurelho Gomes (100). But a gold and black star is reserved for those who somehow thought of Jose Holebas (97) and Craig Cathcart (89).

For a centre-half to make that list is unexpected, given that is perhaps the one position most affected by Watford’s constant chopping and changing. Their first season after promotion saw Cathcart (32) start the most games in central defence, with Sebastian Prodl (32) picking up that mantle in 2016/17 and Christian Kabasele (27) taking the reins last campaign.

Cathcart (31) is already breaking new ground as a long-term leader in a short-term world, and this season has been his crowning achievement. He has played the most minutes of any Watford player in all competitions, with the club drawing one and losing the other two of the three Premier League games he has missed.

9) Victor Lindelof
In a season that has seen Ander Herrera, Scott McTominay, Nemanja Matic and Ashley Young all used at centre-half, with Jose Mourinho looking on with envy at West Ham’s scouting department, Victor Lindelof has been a welcome beacon of positivity. That £30.75m fee is ever so slowly but surely being repaid.

It has been a steady if not stellar season for the Swede. An improvement was already clear under Mourinho before Ole Gunnar Solskjaer’s appointment seemed to fast-track his development and remind us that youth demands patience. As long as he never plays at right-back again, United already have at least one player they can justify building a defence around.

8) Kurt Zouma
Like the seemingly deranged man who wears a colander on his head and has his basement converted into a nuclear bunker, Chelsea started hoarding supplies long ago. Their impending FIFA transfer ban might well be a self-inflicted atomic bomb, but the Blues have been stocking up in preparation for some time.

Kurt Zouma might be the first of the club’s infamous loan army to have his conscription revoked. The 24-year-old has enjoyed a rather more positive experience than his last temporary spell away from Stamford Bridge, with a fine Everton campaign helping to expunge Stoke’s relegation from his memory. Not since before his long-term knee injury in February 2016 has the Frenchman been performing at a higher level.

7) Antonio Rudiger
It is a wonder that Chelsea have conceded just three more goals than Tottenham this season. Kepa is a maturing goalkeeper who has hardly been a considerable replacement on his predecessor, Cesar Azpilicueta has had perhaps the worst campaign of his Stamford Bridge career, David Luiz will forever be the centre-half controlled by a 10-year-old on a PlayStation, no matter how consistent he has been over the past couple of years, and Marcos Alonso is Marcos Alonso.

With Jorginho offering scant protection and N’Golo Kante deployed slightly further forward, the job of a Chelsea defender has rarely been as difficult. But Antonio Rudiger has risen to the challenge, headed it clear, rallied the troops and offered a frank post-match interview.

It might not have been enough to force Eden Hazard to stay true to his words at the end of last season, but the Belgian is not the only reason Chelsea find themselves third and in a Europa League semi-final. Rudiger has been one of the most prominent members of his supporting cast.

6) Fabian Schar
I would usually be loathe to include a player with just 19 league starts on a seasonal list of the top ten best players in his position. Joe Gomez, Laurent Koscielny and Joel Matip were all considered for inclusion but their excellent form spanned less than half a campaign.

Fabian Schar admittedly did not establish himself in the Newcastle side until November, but at least featured before then. Not that he will remember his Magpies debut fondly, having been substituted within three minutes of conceding a penalty in August’s narrow defeat to Chelsea.

He only played then because Jamaal Lascelles had argued with Matt Ritchie about Rafael Benitez’s tactics on the eve of that game. But they have conceded four fewer goals than Manchester United and just one more than Arsenal, and no player outside of £3.5m bargain Schar has adapted as well to his manager’s three-man defensive system.

Newcastle have conceded 19 goals in as many league games when Schar has started this season, compared to 25 goals in 16 matches without him. They have drawn four and lost ten of the 14 fixtures he has missed, winning 11 and drawing four of the 21 he has played. The club’s Swiss banker is fine proof that backing Benitez in the transfer market need not necessarily mean spending lavishly, just cleverly.

“I wanted to prove something again. To show that the period before the tournament in which I did not play – for whatever reason – was unjustified.”

He might have narrowly failed to help deliver a World Cup for which Belgium seemed primed, but Alderweireld certainly accomplished one of his personal summer objectives. A regular for the world’s third-best country was, by his manager’s own definition, his club’s third-best defender.

The 30-year-old was actually given less minutes in all competitions than Serge Aurier last season due to a combination of injuries, his contract situation and Mauricio Pochettino’s favouring of Davinson Sanchez. But the response this season has been emphatic. Alderweireld might not be the imposing force he once was, and has not been the division’s best centre-half in some time, but he is still excellent.

4) Conor Coady
It probably didn’t occur to Conor Coady that five years and three months would separate his first and second Premier League appearances. Plenty had changed in the interim between the central midfielder replacing Philippe Coutinho in the final minute of Liverpool’s 2012/13 campaign and the central defender donning the captain’s armband for Wolves against Everton last August.

“I just looked at my own transition from midfielder to centre-back because of how the game was going,” Jamie Carragher said in November. “There is less space in there now. It is not just about whether you can pass, it is whether you can move the ball quickly when you are being pressed and being closed down. But with his leadership qualities, physique and reading of the game, he just looked like a centre-back to me.”

For a player born in St Helens who joined Liverpool in 2005 of all years, there can be no higher praise. Coady might forever wait for his crowning moment at international level, but there is little more he could have done in a breakthrough top-flight season for his club.

3) Jan Vertonghen
It has been a strange season for centre-halves. Liverpool and Manchester City have conceded 15 and 13 goals less than the next best Premier League defence yet the runaway top two have both built on the foundations of one exceptional player rather than a settled partnership.

There is still no better tandem than Tottenham’s. After a brief hiatus last campaign, Jan and Toby have been reunited at the heart of a defence they are helping keep together as it falls apart around them. Hugo Lloris, Kieran Trippier, Serge Aurier, Danny Rose and Ben Davies have veered from average to downright abysmal throughout the season, saved only by their Belgian brethren.

Vertonghen has edged the friendly battle this time around, leading his compatriot on both tackles and interceptions despite playing 783 minutes less. Having had an undoubted influence on runs to the Champions League and World Cup semi-finals, these might have been the best ten months of the 31-year-old’s career thus far.

2) Aymeric Laporte
As far as exceptions to rules go, it was as costly as it was catastrophic. But one woeful Champions League quarter-final performance should not come to define what has been an otherwise excellent season.

“It is difficult to find a better left central defender than him in the world,” said Pep Guardiola in October, and in terms of what City need, only a fool would argue. Laporte has been the solitary island of consistency in Manchester City’s constantly changing central defensive sea. The Frenchman has started ten more Premier League games than John Stones, more than twice as many as Nicolas Otamendi and more than three times that of Vincent Kompany, maintaining his fitness and temperament as well as his impeccable standards.

Even more impressive is that he has played alongside four different left-backs, none of whom have started more than ten Premier League games. While entire defences tend to improve over time through stability and the established connections built only through playing regularly alongside one another, Laporte has excelled amid relative uncertainty.

The job of a City centre-half might seem easy, but the 24-year-old is tasked with keeping high concentration levels in defence as the first line of the attack, all while the faces of those around him change every week. He is the embodiment of Guardiola’s side: no outfielder has played more minutes for a team that could become the first to defend the Premier League title in a decade.

1) Phil Jones
Franco Baresi has posters of Phil Jones on his bedroom wall.

1) Virgil van Dijk
Only two teams have ever conceded fewer goals in an entire Premier League season. As an isolated improvement from 50 goals against in 2015/16 – Jurgen Klopp’s first campaign – to 20 so far in 2018/19, that is quite astounding from Liverpool as a team.

But in a wider historical context, Virgil van Dijk deserves the utmost praise as an individual. When Arsenal conceded just 17 goals in 1998/99, Martin Keown started 34 league games to Tony Adams’ 26 and Steve Bould’s 14. The Chelsea defence that was breached just 15 times in 2004/05 relied on John Terry (36 league starts) but was supplemented by Ricardo Carvalho, William Gallas and Robert Huth, none of whom started more than 22 games alongside him.

Van Dijk (35) has followed a similar path, shining in a partnership with Joe Gomez (9) in the first half of the season before forming fine alliances with Joel Matip (16), Dejan Lovren (9) and even Fabinho (1). All three have unique skill sets but shared one indomitable defensive leader. The Dutchman has raised not only his own bar but those of everyone around him.

The statistics about never having been dribbled past since he was 3 almost trivialise his talent. The constant favourable comparisons with Paolo Maldini, Rio Ferdinand and Nemanja Vidic has a similar effect. There is no need for such exaggeration when the truth – that Van Dijk is currently one of the three best centre-halves in the world – is plain to see. He might yet reach the heights of the absolute greats, but even being part of that conversation is testament to his brilliance.