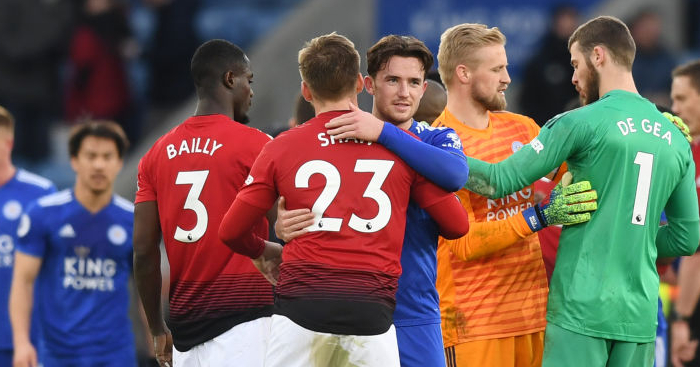 Don’t forget to get angry at our list of the ten best signings and ten best goalkeepers of the season.

10) Luke Shaw
Almost exactly 12 months on from being implored to either lose weight or ‘find himself an XL shirt like the rest of us’, and two years after one of Jose Mourinho’s many public lashings, Luke Shaw seems to have finally come out the other side. He is far from unscathed but he has at least established himself as Manchester United’s short-term, if not long-term, left-back.

Mourinho does deserve some credit for what has been an overdue season of positivity for Shaw. The 23-year-old was not exiled from Old Trafford until Ole Gunnar Solskjaer’s arrival – 17 of his 34 Premier and Champions League starts this season came under the Portuguese – but while the form of almost all of his teammates has fluctuated between managerial appointments, his level of performance has been perhaps the most consistent of any player. A new left-back will appear far down on United’s list of priority signings this summer, and even then it might only be to provide viable competition.

9) Jose Holebas
As far as endearing yourself to a new fanbase goes, Jose Holebas took a while to master the art. Within 24 hours of Watford announcing he had signed from Roma in 2015, the left-back did not speak of his excitement at joining, nor did he thank the supporters for their warm welcome and vow to repay the faith. He did not even arrange a press conference and turn up dressed as Elton John. Instead, Holebas pointed out that Roma “arranged my transfer without asking me,” that “I haven’t signed anything yet, I have to see the contract first,” and that “I never said I wanted to leave”.

The 34-year-old even played just 11 times in his first season, fell one short of the all-time record for bookings in a single Premier League campaign in his second and was dropped towards the end of Marco Silva’s reign in his third. Javi Gracia finally appreciated his unique talents upon his January 2018 appointment, and promising form at the end of last campaign has carried through.

Joshua Kimmich (13) is the only defender across Europe’s top five leagues with more combined goals and assists this season than Holebas, whose nine matches the tallies of both Andy Robertson and Jordi Alba. At seven months older than Pablo Zabaleta, that shouldn’t really be a thing.

8) Kyle Walker
Only three members of last season’s list of the top ten Premier League full-backs take their places 12 months later. But while two of that triptych are moving on up, Kyle Walker is moving on out of the No.1 spot.

The right-back has failed to meet the high standards he set himself in his debut Etihad Stadium season, as well as in his final few years with Tottenham. “He will learn,” Pep Guardiola said after an error-strewn performance in December’s defeat to Crystal Palace. “Footballers do good things and bad things but everyone else is involved too, those at the front as well as at the back.”

His relative vulnerability has even been reflected in a role of slightly reduced importance at international level. But the 28-year-old remains a vital cog in the Manchester City machine, and a useful part of an improving England side. That only Ederson (4,350) and Aymeric Laporte (3,722) have played more minutes in all competitions (3,673) for a team chasing an unprecedented Quadruple is no accident.

7) Ricardo Pereira
Only two players in all of Europe have made more than 100 tackles and completed at least 50 dribbles this season. It is quite ridiculous that Aaron Wan-Bissaka is already posting such numbers, but membership of that illustrious group illustrates just how far under the radar Ricardo Pereira has flown.

Leicester have five or six players – and one manager – who demand a far greater share of the spotlight than the Portuguese. The club’s most expensive summer signing has been overshadowed by both James Maddison and Youri Tielemans, as well as numerous long-serving Foxes.

Leicester’s only wins in the seven games Pereira has not started this season have come against Huddersfield in the Premier League and Fleetwood and Wolves in the League Cup. Draws with West Ham, Fulham and Southampton and defeats to Manchester City and Newport sum up his significance. He is the player they can least afford to lose.

6) Matt Doherty
Kevin Doyle and Carl Ikeme have retired, Jack Price is playing in America and numerous players are plying their respective trades in the lower leagues, many under former club captain Sam Ricketts at Shrewsbury. Matt Doherty is perhaps the only member of that title-winning Wolves squad to have climbed the ladder and remained towards the top five years later.

The right-back has been the club’s one constant during a time of great upheaval. Signed from Bohemians during the club’s previous top-flight stint in 2010, he has finally and firmly established himself as a first-team regular. Wolves’ next longest-serving player is homegrown Ethan Ebanks-Landell, followed by 2014 signing Kortney Hause. Neither are even close to Nuno’s squad, yet Doherty is one of the manager’s most important players.

The only Premier League appearance of his entire career before this season was a 45-minute second-half cameo in a defeat to Liverpool in September 2011. Roger Johnson scored an own goal in that game, with a midfield of Karl Henry, David Edwards and Jamie O’Hara struggling at Anfield. Wolves have taken giant strides since, with Doherty rising to every challenge along the way.

5) Trent Alexander-Arnold
It is just five months ago that Jurgen Klopp felt compelled to come to the defence of his right-back. “Trent is a very young boy still,” he said. “He had two weeks off in the summer, that’s not a lot. It’s clear we try to have an eye constantly on him fitness-wise, not working with the group, stuff like that.”

The 20-year-old had endured a difficult few months, being dropped for the draw against Manchester City, the win over Huddersfield and the defeat at PSG, as well as being substituted at half-time during the loss to Red Star. But his form since has been impeccable, and a further injury-enforced rest at the start of the year has kept him fresh and focused.

Liverpool have dropped points in just eight of their 34 Premier League games this season. Alexander-Arnold, despite missing only nine matches, was sidelined for four of them. He has become one of Liverpool’s most important players.

4) Lucas Digne
It cannot be easy to realise that you are the city’s second-best player in your preferred position. Kieran Trippier is quite emphatically inferior to Hector Bellerin, one must sympathise with any Manchester United striker when Sergio Aguero is their direct rival, and Virgil van Dijk knows only too well the difficulties of living in Michael Keane’s shadow.

Lucas Digne might rue his misfortune at leaving Barcelona to escape Jordi Alba, only to be eclipsed as Merseyside’s best left-back. But the 25-year-old has been one of the best signings of the season as one of the main challengers to Andy Robertson’s throne.

It bears repeating that Digne is Europe’s second most creative defender (bloody Joshua Kimmich), having made as many key passes (58) as Dries Mertens and Bernardo Silva, nine more than Angel di Maria, 57 more than Papy Djilobodji and one less than Raheem Sterling and Jadon Sancho this season. Even with Everton’s expensively assembled attack, only three players have scored more league goals and none have more assists than their left-back. And only midfield machine Idrissa Gueye (126) has made more than his 61 tackles for the Toffees. Leighton Baines can finally put his feet up.

3) Ben Chilwell
Even last season, Ben Chilwell was the exciting apprentice to the ageing, declining master that was Christian Fuchs. The latter started 20 Premier League games at left-back for Leicester in 2017/18, compared to just two this campaign. It is no coincidence that Leicester lost both of those matches.

Chilwell would represent an upgrade on the Austrian even in his title-winning prime. He is a supreme defender and has showcased his attacking credentials as an England international, with a maturity and a haircut that belies his youthful energy.

Teammate Wilfred Ndidi (3,007) is the only player aged 22 or under to have played more league minutes than Chilwell (2,880) across the Premier League, La Liga, Serie A, the Bundesliga and Ligue Un this season. He should harbour no shame as the current second-best left-back in England’s top flight, and will surely attract interest this summer.

2) Aaron Wan-Bissaka
It was an injury to Paul Parker that gave a 19-year-old Gary Neville the opportunity to establish himself in the Manchester United first team in November 1994. He was thrust into a Premier League title-winning side surrounded by the experience of Steve Bruce, Gary Pallister, Denis Irwin and Eric Cantona, but also the confidence of former youth teammates Paul Scholes, David Beckham and Ryan Giggs.

Aaron Wan-Bissaka had to wait for Martin Kelly and Joel Ward to fall victim to a Crystal Palace injury crisis to be given his chance in the midst of a Premier League relegation battle last February. With Jairo Riedewald, Timothy Fosu-Mensah, Patrick van Aanholt and Alexander Sorloth among his first senior teammates, the then-20-year-old had been thrown in at the deep end with weights tied to his boots.

From that baptism of fire has emerged one of the hottest prospects in Europe. Wan-Bissaka’s development has been so stark, sudden and impressive that it is impossible not to take notice of England’s right-back of the future.

Wan-Bissaka is the perfect footballing paradox: a player so naturally gifted going forward that he would test even his own defensive brilliance, but a right-back so imperious that, if he were to have continued in his previous position, he would be one of the numerous wingers who don’t like him. It feels like he’s been around for years, and he will only continue to improve.

1) Andy Robertson
How weird it seems that Andy Robertson started just two Premier League games before December in his debut season with Liverpool. The Scot still made the podium on this same list 12 months ago but, by virtue of a full campaign in a title-challenging side, is the runaway leader this time around.

He is part of Jurgen Klopp’s “important” double act. Virgil van Dijk sees him as a future Liverpool captain. Jose Mourinho once knackered himself out just by watching him. Pep Guardiola covets him. Even Phil Neville bloody loves him, because game really does recognise game.

The England manager described Robertson as “the best left-back I see in Europe at this moment in time” last month, and it becomes more and more difficult to pose a counter-argument with each passing week. His boundless energy, his electrifying pace and his startling dynamism is quite the combination, particularly for an international captain who has only just turned 25.

Robertson has no real weakness, and the only defenders to record more assists than his nine in a single Premier League season are Leighton Baines (2010/11) and Andy Hinchcliffe (1994/95, both 11). Hull, for whom Kevin Stewart has started just 24 of possible 88 Championship games since heading the other way in July 2017, must still be pursuing a daylight robbery charge.