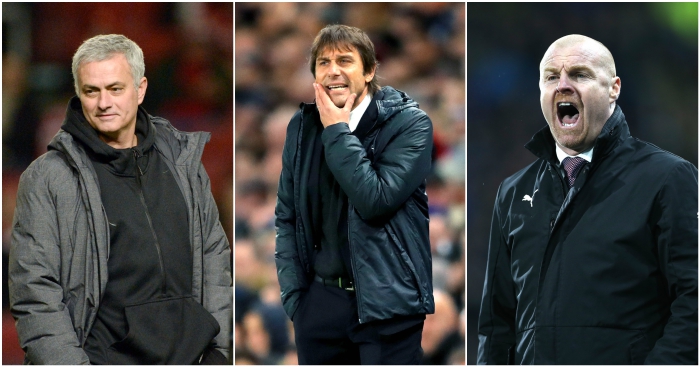 10) Jurgen Klopp (Liverpool)
This place could have very easily been awarded to Arsene Wenger had December gone a little better (winning trophies is still, just about, the point of football), but Liverpool’s 15-match unbeaten run to end 2017 sees Klopp claim this spot despite a year which has seen the Reds amass the fewest Premier League points of the top six teams.

The calendar year began with Liverpool the nearest challengers to Chelsea and it ended with them 18 points behind champions-elect Manchester City so it is impossible to argue that Liverpool have not, at the very best, trodden water in the Premier League. But ending 2017 still in the Champions League, having scored a barrel-load of goals, and with a new bona fide Liverpool hero in Mo Salah means there is a tentative tick next to the German’s name.

Now to prove Daniel Storey wrong and win something in 2018.

9) Chris Hughton (Brighton)
We doubted Brighton would have enough goals to survive – and that may yet be a problem with only Swansea finding the net fewer times than the Seagulls’ 15 before New Year’s Day – but we can only congratulate Chris Hughton on organising a team to concede fewer goals in the first 21 games of the season (25) than Arsenal; Lewis Dunk and Shane Duffy have been a revelation in central defence.

Few things have been spectacular about Brighton’s season so far – four of their five victories have come against teams very much in the relegation mire – but slow and steady has left them ahead of the curve as they enter 2018. And points should be awarded for the bargain signing of the excellent Pascal Gross, and for looking so damned good at 59. That’s the same age as Tony Pulis, who was coincidentally ninth on this list last year.

8) Claude Puel (Southampton/Leicester)
He began the calendar year in ninth with Southampton and ended it in eighth with Leicester City, which seems an aptly underwhelming but quietly impressive improvement from one of the Premier League’s invisible men. Clearly there was no great love for Puel at Southampton, but taking them to eighth and a cup final now looks in hindsight like a minor miracle; sacking him looks like a major mistake.

There was bafflement from the likes of Stan Collymore when Leicester turned to the Frenchman but if your realistic target is eighth, appointing the man who has most recently finished eighth looks like a sensible if uninspired option. He has delivered 18 points from 12 games, taking Puel himself to 40 points from 31 for 2017; that’s five more than West Brom and only three points short of Stoke’s annual total in nine more games.

7) Mauricio Pochettino (Tottenham Hotspur)
On the plus side: Ten more points claimed than Manchester United in 2017, a place in the knock-out stages of the Champions League and the proud owner of goalscoring sensation Harry Kane. On the minus side: Still potless.

It has been a good year for Mauricio Pochettino – with two performances against Real Madrid the stand-out moments – but it has not been a great year. Defeats at Manchester City, Arsenal and Manchester United this season have been sobering, while FA Cup semi-final defeat to Chelsea last season must have hurt more than Pochettino would care to admit. File their summer business under both ‘late’ and ‘forgettable’, with the exception of the excellent Davinson Sanchez.

6) Sam Allardyce (Crystal Palace/Everton)
It is difficult to argue with a points total of 37 points from 26 games, especially when West Brom have picked up 35 points in total from 40 games in 2017. Allardyce ended 2016 in 17th place with Crystal Palace and then ended 2017 in ninth with Everton; that is an astonishing personal rise in 12 months which saw him lead Palace to safety, seemingly retire and then somehow end up with the biggest club job of his career.

As I have written before, Allardyce is the firefighter called by the Toffees to rescue a cat from a tree, but some credit is due – taking Everton on a seven-match unbeaten Premier League run had looked impossible under his predecessor. But then taking one point from games against West Brom and Bournemouth hints at darker times to come. Can he complete a full calendar year at one club for the first time since 2014? Frankly, I have my doubts.

Victory against Manchester United will be long remembered regardless of how this season ends, as will the efforts of the wonderful Aaron Mooy and Christopher Schindler. Wagner has built a team to compete in the Premier League, and that looked like a pipe dream as 2016 ended with a 1-1 home Championship draw against Blackburn secured with an injury-time equaliser.

The fans sing that he’s better than Klopp; he is certainly higher on this list for 2017.

4) Jose Mourinho (Manchester United)
As 2016 slipped away and 2017 began, Manchester United could boast five consecutive Premier League victories but all that effort had not lifted them from sixth. It felt like they might be sixth forever. Exactly 12 months later, they ended the year with three consecutive draws but they dropped no lower than third. Add two trophies and a successful Champions League group stage and you have to declare 2017 a partial success for Mourinho and Manchester United.

Still, any year that ends with United 15 points behind Manchester City can never offer anything more than partial success, and right now that gaps feels insurmountable, both this season and in general. It has made Mourinho a prematurely bitter man, moaning of money and referees and injuries as though the world is conspiring against him. Our big prediction: He will not last 2018.

3) Pep Guardiola (Manchester City)
Forty Premier League matches in 2017 brought 102 goals (34 more than Manchester United), 98 points (24 more than Liverpool), 30 victories (ten more than Liverpool) and just two defeats (nine fewer than Arsenal). But the Spaniard is not top of this list because it has brought no trophies (one fewer than Chelsea and Arsenal, two fewer than Manchester United). He has built possibly the most wonderful team in Premier League history, so we can wait.

City claimed an astonishing 59 points from the first 21 Premier League games of the season: More than every team barring the top six and Everton across the whole calendar year. They are nothing short of a phenomenon, with Guardiola deserving spadefuls of credit for his work in improving almost every member of that squad, but most notably Raheem Sterling, Kevin De Bruyne and David Silva. We make no apology for being in awe.

2) Antonio Conte (Chelsea)
Chelsea may not have won the Premier League title with the same panache being currently exhibited by Manchester City, but theirs was a triumph born from the iron will of Antonio Conte, who forged an unlikely winning machine from the raw materials of Victor Moses and Marcos Alonso, placing Cesar Azpilicueta and N’Golo Kante at the heart. Eden Hazard was revitalised, Pedro was released and Diego Costa was shackled for just long enough to claim the title.

There is an uneasiness about both Conte and Chelsea this season but they still managed to end 2017 in second place behind Manchester City and with places claimed in the latter stages of two other competitions. This is not a marriage made to last but it has delivered a pretty sexy (and extended) honeymoon.

1) Sean Dyche (Burnley)
There are 15 Premier League teams who have scored more goals than Burnley in 2017 (West Brom are the odd team out), but there are only three who have conceded fewer goals than them. Consequently, only seven Premier League clubs have claimed more points in 2017.

Oh and they lost their key central defender and their leading striker somewhere in the middle. And we all thought they would go down and we were not alone.

The only explanation: Sean Dyche is a sodding genius. And he’s our No. 1.