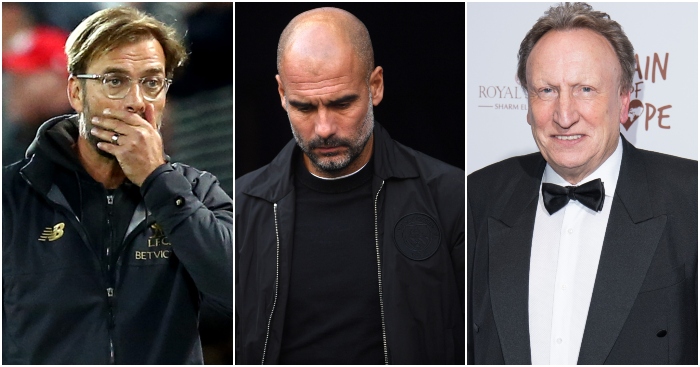 10) Maurizio Sarri (Chelsea)
‘Allowing a manager to fail might be Chelsea’s clearest route to sustained success,’ I wrote in October, suggesting that Maurizio Sarri should be allowed at least one fallow year as Chelsea manager – a privilege previously afforded only to Jose Mourinho in his second spell under Roman Abramovich.

By any sensible measure, he is not failing at Chelsea, leading them to what looks like a very sustainable fourth place in the Premier League, five points clear of Arsenal and eight points clear of Manchester United. It’s important to remember that he is attempting to alter Chelsea’s entire ethos while changing only two or three members of the starting XI; we are yet to see what he could achieve with an actual striker worthy of the billing. But so far – with a flawed squad – so good.

9) Rafa Benitez (Newcastle United)
Roy Hodgson was originally pencilled into this list after a 2018 that almost exactly mirrors that of Rafa Benitez at Newcastle. They began 2018 on the same points total and end it within a point of each other, having enjoyed very little investment in the summer. They are both keeping their teams just clear enough of relegation trouble, though a return of less than a point a game this season keeps them both in the Sh*t Seven, with Palace failing to pull away as we had predicted.

The difference? We think Hodgson has a marginally better squad. Benitez does not have an Andros Townsend, never mind a Wilfried Zaha. He definitely does not have an Aaron Wan-Bissaka or a Mamadou Sakho. Which makes his achievement of conceding the same number of Premier League goals in 2018 as Manchester United pretty damned remarkable.

Rafa Benitez's name being belted out in the away end. #nufc

8) Javi Gracia (Watford)
On January 21, Javi Gracia could become the first Watford manager to survive a calendar year in charge of the Hornets in the Premier League. Taking over a team in tenth and leading them to ninth by year end might not sound like such a fine achievement but a closer look at the figures reveals a far brighter picture.

The team that Gracia took over from Marco Silva had won just once in 11 games and sat eight points behind Leicester in seventh, surely the pinnacle of their ambition. Now, Gracia’s side have lost just one of their last five games and sit just a point behind Wolves in seventh. Oh and they made a transfer profit this summer as they sold their best player. A job very well done, Sir.

#JaviGracia. How he's doing after less than a year England, is nothing short of brilliant. He has lots to learn but he's learning. He'll make mistakes but he'll adapt. He'll get some new players & he'll move some on. If you're a #watfordfc fan who's not behind him, you're daft.

7) Eddie Howe (Bournemouth)
Had I written this list two months ago, Eddie Howe might have been about four places higher. But the onset of winter has been cruel to the Cherries, who have lost eight of their last ten games, conceding a barely believable 26 goals in the process. Ouch. The days of Howe being touted for a top-six job now seem a long, long way away.

And yet 2018 has still seen Bournemouth move from 14th to 12th and, most impressively, it has seem them pick up more points than every team barring the top six and West Ham. Those blue eyes may look a little duller as the clock ticks out of 2018 but it has still been a year to celebrate. Now to stop the rot early in 2019.

On Chris Hughton’s fourth anniversary in charge of Brighton, a chart to show how far they’ve climbed, via ⁦@TelegraphSport⁩ pic.twitter.com/jqlZPYelw7

We don’t need to add an awful lot of words do that graph but I do need to admit that I thought they would be relegated this season; I was convinced that glut of summer signings was simply too much meddling. What has actually happened is that Brighton have become the best home side outside the top six, and it is that form that has taken them a remarkable ten points clear of the relegation zone. They could be here to stay and we could not be happier for one of football’s good guys.

5) Nuno Espirito Santo (Wolves)
To quote Winners and Losers after their remarkable win over Tottenham: ‘Now emphatically over the blip that threatened to take the shine off an excellent start to Premier League life. Wolves’ ability to unnerve the best teams in the Premier League bodes particularly well for their ambitions of breaking into that cabal.

‘In a table composed of matches between the Big Six teams and Wolves this season – a mini seven-team Premier League – Nuno’s side rank in fourth with 1.29 points per game. That is level with Spurs and more than Arsenal and Manchester United. You better believe this manager and his players consider that they belong in such company.’

And they have amassed six more Premier League points in 2018 than Huddersfield Town. Which is making me want to weep a little.

4) Mauricio Pochettino (Tottenham)
Having been seventh on this list in both 2016 and 2017, Pochettino returns to the fourth place he occupied in 2015 after a truly remarkable 2018 which has seen them rise from sixth – 22 whole points behind Manchester City – to third, just two points behind City and a credible nine points behind leaders Liverpool. The bores will say he has won nothing but there is a reason why Manchester United covet him so; he has amassed 13 more points than the Reds in 2018 while spending only £25m on Lucas Moura. And the football is pretty decent too. This is the stuff of miracles.

So what next? One hell of a decision to make, that’s what.

3) Neil Warnock (Cardiff)
As 2017 became 2018, Cardiff City were fourth in the Championship, behind Bristol City on goal difference and 11 points adrift of leaders Wolves. As 2018 becomes 2019, Cardiff City are 16th in the Premier League and still 11 points behind Wolves. To say that they would have jumped at that scenario in the summer is a massive understatement; they are undoubtedly the rampant overachievers of this Premier League season.

btw, my manager of 2018 on the last @TeleFootball podcast was Neil Warnock. I'm very comfortable with my choice.

There is barely a person alive who did not predict their relegation, with some suggesting that Derby’s lowest points total was in danger. And yet here we are at the turn of the year with Cardiff still harbouring a fighting chance of survival after a remarkable first away win of the season at Leicester.

Back to Winners for this: ‘Every time you write them off, back come Cardiff City to keep their heads above water. It’s like this entire season is a practical joke that Neil Warnock is playing on us. They will survive on the final day of the season, Warnock will come onto the pitch to celebrate and promptly announce his retirement.’

2) Jurgen Klopp (Liverpool)
One of Daniel Storey’s fine predictions for 2018 was that Liverpool would be the best side not to win a trophy, again. He was right. But while he wrote about Liverpool having the potential for ‘jeopardy’, Jurgen Klopp was busy eradicating that jeopardy by spending a massive amount of money on Virgil van Dijk, our Premier League player of 2018. He then spent again in the summer to produce a team that is currently unbeaten and seven points clear at the top of the table. Oh and they reached a Champions League final.

It’s hard to believe that this time last year (when Klopp sneaked into this list in tenth), Liverpool were 18 points shy of Manchester City having conceded twice the number of goals. This is a team transformed in one calendar year in which they matched City point for point. That they have conceded just 22 goals in 37 Premier League games in 2018 is nothing short of astonishing.

But of course he is a fraud because he hasn’t won anything (at Liverpool) yet.

1) Pep Guardiola (Manchester City)
Most points, most goals, most wins, biggest goal difference, biggest gap to second. Do not make the mistake of forgetting just what Pep Guardiola achieved with Manchester City in 2017/18. His City side was (and largely remains) remarkable, even if they have showed rather more vulnerability this season, particularly in the absence of Fernandinho. Could not strengthening in central midfield cost them the retention of the title? Quite possibly.

Missed chances at Southampton on Sunday certainly cost them the plastic record of 100 goals in a calendar year, but the victory kept them ahead of Liverpool in the annual table. And two actual trophies keeps Guardiola ahead of Klopp in this list. But my word, are we ever giddy for 2019…