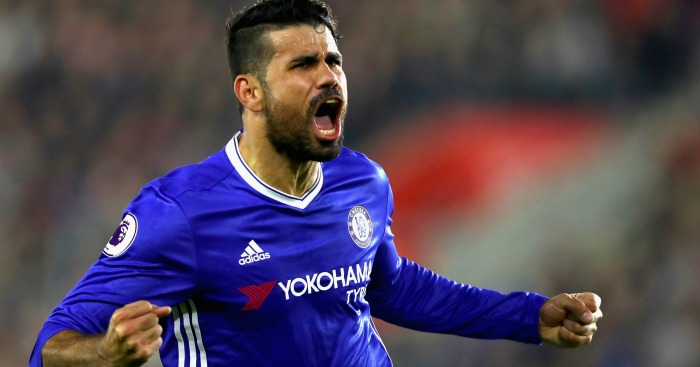 The Algerian undoubtedly enjoyed his best form from August to December last season, where he scored 13 of his 17 goals and registered six of his ten assists. But his influence in the Foxes’ title charge in the new year should not be overlooked. He inspired a monumental victory over Manchester City in February, before scoring the only goals in consecutive 1-0 away victories at Watford and Crystal Palace in March. He has underwhelmed on the domestic front this campaign, but so have Leicester as a whole. That is the consequence of setting such high standards.

9. Dimitri Payet
The calendar year started with dreams of Europe, and it will end with fears over relegation. Through it all, Dimitri Payet offered West Ham protection, a lot of love and affection, except when he fluttered his eyelashes at Marseille in the hope that the Ligue Un side would rescue him from the ignominy of having to play at the London Stadium.

West Ham scored 56 goals in all of 2016; Payet scored or assisted 21 of them. Michail Antonio (18) is the closest to that tally in terms of his teammates, then it is a sharp fall to reach Mark Noble (ten) in third. He continues to be vilified for the poor start Slaven Bilic’s side have endured this season, but Cheikhou Kouyate or Simone Zaza haven’t created the most goalscoring opportunities of any player across Europe’s top five leagues, have they? For Payet to do so for a team just five points clear of the Premier League relegation zone is quite something.

8. Virgil van Dijk
When Southampton begin preparations for their annual summer clearout, they will know the identity of the one individual every side will covet. Maya Yoshida will not be in demand, while few clubs will flock to fight it out for the excellent Steven Davis. Any potential transfer battle will play out over Virgil van Dijk’s future.

The towering Dutchman would improve any elite Premier League side, from leaders Chelsea straight through to Manchester United. The 25-year-old only moved to England’s top flight last summer, but he has acclimatised in strikingly quick fashion. He is tall and strong enough to deal with the most robust strikers, and fast enough to nullify pacier threats. Southampton have conceded 34 goals in 2016 – only Tottenham (32) have a better defensive record. Van Dijk is the only member of the St Mary’s back four to have been a calendar year ever-present.

7. Hugo Lloris
And no member of Tottenham’s back five has featured in more of their 36 games this year than Hugo Lloris. Whether it is Toby Alderweireld, Jan Vertonghen, Eric Dier or Kevin Wimmer in front of him, the Frenchman has proved countless times that he is currently the best keeper in the Premier League. He has conceded more than one goal just six times in a league fixture since January – in March’s 2-2 draw with Arsenal, in victory over West Ham and defeat to Chelsea this season, and in the capitulation that was Tottenham’s final three games of last campaign. He has been a model of consistent excellence, and is the perfect reflection of his quiet, determined manager.

6. Roberto Firmino
From one of the worst signings of the 2015 summer transfer window to one of the best players of 2016 – it has been a long road for Roberto Firmino. His start to life in England was difficult after moving from Hoffenheim, and he was made to wait until November for his first Premier League goal. But he has since become one of Jurgen Klopp’s most prominent disciples at Liverpool.

In 30 games this calendar year, the Brazilian has scored 14 goals and provided nine assists. Only three players have a better combined tally, and each make the top five in this list. It is esteemed company that Firmino holds himself in, to say the very least.

5. Sergio Aguero
It seems somewhat churlish to rank Sergio Aguero as the fifth best player of 2016, considering the Manchester City striker has scored at least six more goals than any other player since January. Perhaps we have simply become anaesthetised to his talents after years of consistent brilliance. Absence makes the heart grow fonder, but the Argentinean is rarely sidelined for longer than three matches – which is coincidentally the length of a FA ban.

Instead, he is the one constant in the Premier League’s ever-changing landscape of strikers, the only player to appear in this same list last year. Jamie Vardy, Harry Kane, Romelu Lukaku and Olivier Giroud have fallen; Aguero remains.

4. Alexis Sanchez
Laurent Koscielny has looked questionable of late; Santi Cazorla has been injured; Olivier Giroud is no longer a starter; Mesut Ozil continues to flirt between indispensable ingenuity and expendable exasperation.

Indeed, when examining who Arsenal’s best player has been over the past 12 months, there really is only one candidate. Without Alexis Sanchez, who knows where they would be?

The Chilean has scored 19 goals and provided ten assists in 33 games in 2016. Only one player has more combined goals and assists, and that is with Sanchez starting the year as a winger. Since moving to a centre-forward role, he has become an absolute wonder to watch. Just as Luis Suarez did with Liverpool, has Sanchez outgrown Arsenal?

3. Adam Lallana
“I am not sure how many games you saw like this from Adam Lallana? What do you think?” asked Jurgen Klopp in October 2015. The German had just overseen his first game as Liverpool manager, a 0-0 draw with Tottenham. Adam Lallana had been removed after 81 minutes, the England international collapsing into Klopp’s arms after running his little socks off. It was one of his better games in a Liverpool shirt. Few predicted this would be the start of a beautiful relationship.

“I know him from Southampton and he can do 20/30 per cent more,” Klopp added on that day 14 months ago, and yet even the manager must have been stunned at the transformation Lallana has undergone since. Not only did the 28-year-old have “20 or 30 per cent more” to give, but he has scored ten goals, provided nine assists and regularly outruns and out-tackles his opponents from a central-midfield position he has made his own for club and country.

2. Diego Costa
Finally, we arrive at the player with the most combined goals and assists in the Premier League in 2016. With 20 strikes and ten assists, Diego Costa has established himself as the continent’s leading centre-forward.

On December 19, 2015, the name of ‘Costa’ appeared alongside ‘Iazzard’ and ‘Cesl’ on a list of Chelsea’s ‘three rats’ – the individuals who had played the biggest part in Jose Mourinho’s demise. The two other names were later revealed to be that of Eden Hazard and Cesc Fabregas, two players who, it was expected, would remain at Stamford Bridge heading into this season.

The same was never true of Costa, who openly admitted in November that he “wanted to go back” to Atletico Madrid in the summer. But the Spaniard was persuaded to stay by Antonio Conte and his goals are now leading a Premier League title challenge. The longest Costa has gone without either scoring or assisting a in the league in 2016 is just two straight games. He is cool, he is calm, he is collected, and he is really quite good.

1. N’Golo Kante
In a Premier League table of the calendar year, Chelsea sit top; they have 73 points from 36 games. Behind them are Tottenham, on 68 points, then Liverpool (67), Arsenal, Manchester City, Manchester United (all 66), and Southampton (63).

Above every side is N’Golo Kante. Despite playing one game fewer than his current employer, he has accrued 85 points in all of 2016, starting all but one of the 36 matches across Leicester’s remarkable Premier League title charge and Chelsea’s journey to the top of the table. He has won at least 12 more points than any other individual this year, has won 26 games, drawn six and lost just three. His record is phenomenal.

The one constant between the best side in the first half of the year and the standout team in the second is the Frenchman. He helped push Leicester over the line to become champions, the Foxes conceding just nine goals in 18 games from January until May. Their collapse since his departure – and Chelsea’s subsequent rise – is no coincidence. The Blues now have the best defensive record after 17 games. Antonio Conte should take due credit – just as Claudio Ranieri did – but both men built their sides around Kante for a reason. In terms of 2016’s best player, it really is not even close.