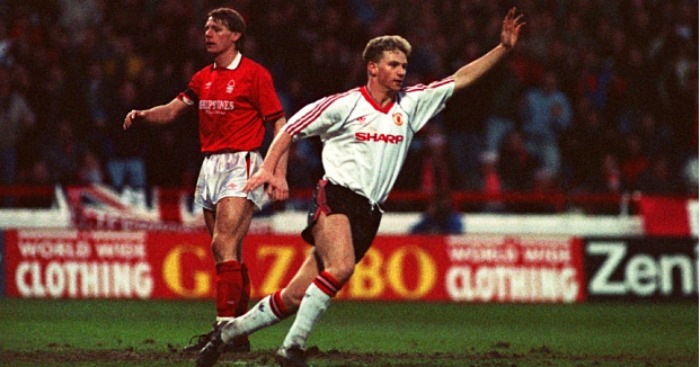 NB: This is not just those players who only did one good thing (Federico Macheda), but those whose reputations or careers (which may be long and successful) are defined by one famous moment.

10) Gordon Banks
Banks played 73 matches for his country and won the World Cup in 1966, yet we have seen very little of his goalkeeping during that tournament. Instead it’s a save made in the same tournament four years later that is etched in our memories, scooping the ball up and over the bar from Pele’s header in 1970.

The man himself doesn’t know why such a fuss is made. “Wherever I go people bring that up all the time,” the 75-year-old said in 2013. “After all these years I cannot believe people still talk about it. Even kids. I get letters from kids in China. Even they’re talking about it.”

It still makes our list, Gordon, sorry. Good save though.

9) Sergio Aguero and Martin Tyler
Sergio Aguero has scored 293 career goals. He’s scored goals in Argentina, Spain and England. He’s played in World Cups, Copa Americas and the Olympic Games. None of this matters in comparison with those heady two minutes against QPR in May 2012.

For a club to score twice in stoppage time to turn defeat into title victory shows outrageous determination and composure under pressure. Both were evident in spades as Aguero showed the wherewithal to dance past the QPR defence and fire past Neil Warnock teacher’s pet Paddy Kenny.

Yet the episode would not be complete without Martin Tyler’s supreme piece of commentary: “I swear you’ll never see anything like this ever again. So watch it, drink it in…two goals in added time from Manchester City to snatch the title away from Manchester United.

“Nothing that comes out in these moments is anything other than a reaction to what you have seen and you just hope your instincts are okay,” Tyler reflected last year. More than okay, Martin: iconic.

8) Bert Trautmann
There were several nominations for an injury inclusion in this list, but I didn’t particularly want to write about David Busst, Alf Inge Haaland or Eduardo. Instead we shall go for an injury with a happy ending, and your grandpa’s stock story when discussing why today’s players are “soft fairies”.

Trautmann’s story was incredible enough before the 1956 FA Cup final. He fought on the Eastern front, was captured as a prisoner of war after a second stint on the front line and caused widespread outrage when signing for Manchester City.

Then came May 5, 1956. Manchester City led Birmingham 3-1 with 15 minutes of the game remaining when Trautmann dived at the feet of Peter Murphy and injured himself. With no substitutions permitted, Trautmann played on and made superb saves as City held on to their lead. It later became clear that the goalkeeper had broken his neck.

I’m the sort of person who squeals when a player has their dislocated finger popped back in; Trautmann is a superhuman.

7) Rene Higuita
One day someone will write a book on Rene Higuita, and those of a younger generation will laugh at surely the most unhinged footballer of the last 20 years. There was the dribbling out from his goal at will. There was Roger Milla dribbling past him in 1990. There were the drug bans. There were the goals from free-kicks. Oh yeah, and there was the prison sentence for kidnapping on behalf of drug lord Pablo Escobar. Oh, oh yeah, and there was the plastic surgery in 2005 to change his appearance entirely.

Yet to most, Higuita will be synonymous with his scorpion kick at Wembley in 1995. Wikipedia credits the Colombian with the ‘invention’ of the bizarre flip, but this was an invention that nobody would ever want to use. A bit like Bacon Floss.

6) Harald Schumacher
Most of the entrants on this list are included for making an impact so positive that it overshadows all other career achievements; Schumacher is the inglorious bastard exception. While fewer people know the name Patrick Battiston, everyone remembers who committed one of football’s most gruesome crimes.

The West Germany goalkeeper’s shoulder charge on the France striker was so brutal that Battiston still has a cracked spine and damage to his teeth. While his teammates comforted Battiston when knocked out on the ground, Schumacher showed no contrition or regret for the incident. When a journalist told him of the striker’s injuries he replied that he would “pay for the crowns”.

Now, Schumacher is deeply remorseful for his actions. “It was cowardice,” he says. “The first moment of my life when I was a coward. I regret that the German delegation and myself didn’t go to the hospital to get the news about Patrick Battiston.”

All a bit late, pal.

“I had no idea that goal against Nottingham Forest would become so important in the history of Manchester United,” said Robins years later. “How could I at the time? Nobody knew it was a pivotal moment for Sir Alex Ferguson.”

But pivotal it was. United would go on to lift the FA Cup that season, leading to the Cup Winners’ Cup the following season (beating Barcelona in the final). A League Cup and title challenge came in 1991/92, and then came the steady climb up a “f**king” perch. All down to Mark Robins, obviously.

4) Antonin Panenka
When you know you’re famous for one thing: Panenka’s personal Wikipedia page is half the length of the page for the Panenka penalty, and more than half of his page is about the penalty anyway.

Nowadays a Panenka penalty, where the taker feigns a powerful shot before chipping the ball down the middle of the goal while the goalkeeper dives, is a regular occurrence. Yet the beauty of Panenka’s original effort lay in both the innovation and the timing. To attempt something so impudent when given the chance to win a European Championship showed bottle, but to pull it off so superbly showed remarkable technique under pressure.

“I came up with the idea because I used to practise penalties after training at Bohemians with our goalkeeper Zdenek Hruska,” Panenka said in 2012. “To make it competitive, we used to wager a beer or a bar of chocolate on each penalty. Unfortunately, because he was such a good keeper, I usually ended up losing money as he kept saving more shots than I could score. I tried it out on the training ground and it worked like a charm. The only problem was that I started getting a lot fatter because I won back all those beers and chocolates.” Excellent.

3) Ronnie Radford
Del Boy falling through the bar. Compo hurtling down the hill in a bath. Dinner for One. The Great Escape. Botham at Headingley during the 1981 Ashes. Ronnie Radford’s goal. These are television’s most repeated moments (my non-scientific survey reveals).

The reason for the Radford repetition is clear; this is The Magic of the FA Cup™, bottled and sold at source by all manner of broadcasters. There is the stage, Edgar Street and a pitch that looks like a recently ploughed farmer’s field. There are the actors, non-league Hereford United and Newcastle of the First Division. There is the protagonist, Ronnie Radford, a part-time joiner and midfielder. There is the perfect denouement, Radford’s tackle and shot from 30 yards to equalise late in the game and force extra-time, with Hereford eventually winning through a Ricky George goal.

In 2015, Radford recalled his post-match celebrations to the BBC Sport. Try reading this without getting the tingles:

“We [Ronnie and his wife Annie] stopped off for fish and chips and ate it in front of Match of the Day. We thought it was going to be two minutes of highlights but they made it the main game. I’d never seen myself play football, I didn’t even know what I looked like when I ran. It was such a strange experience.

“Some of the guys on the site didn’t even know I was playing until they saw me on Match of the Day. I just wanted to be known as Ronnie Radford, the joiner. Somebody up there was pointing his finger at me and saying: ‘Here you go, Ronnie, have a go…'”

2) Jean-Marc Bosman
The man who took on football, and won. Bosman’s successful challenging of the lack of free movement of labour in the game meant that players could move for free at the end of their contracts. Without Bosman there would be no Sol Campbell to Arsenal, Robert Lewandowski to Bayern Munich, Steve McManaman to Real Madrid, Andrea Pirlo to Juventus, Henrik Larsson to Barcelona and plenty more besides.

“Back then, FifPro was a young union and now it is a beautiful union,” Bosman said of his landmark verdict. “Now, if you would attack the Fifa rules and the Uefa rules, it would be much easier for FifPro to win at the European Court of Justice.”

Sadly, Bosman’s own life suffered for his inadvertent fame. He wasted his low pay-out on an unsuccessful business venture and fell into depression and alcohol addiction, culminating in a year-long jail sentence for domestic abuse.

In a list of the greatest stories ever told, Glass’ winner for Carlisle United against Plymouth Argyle ranks just above Jesus’ three-day resurrection trick. On loan from Swindon Town, goalkeeper Glass ventured forward for a corner in the last minute, with Carlisle needing a goal to stay in the Football League. We don’t need the Question of Sport set-up – you know what happened next.

Glass’ story is more memorable still because of how quickly his career fell away. He played less than 50 more matches as a professional, and now runs a taxi business in Dorset. But we’ll never forget him.

“It is quite difficult to understand your place in life from being this guy who will never be forgotten to being the guy worrying about your next bill,” Glass said in an interview with the Independent in 2013. “The goal was an amazing part of my life and is there to be enjoyed, and I will until people get bored of me. Someone on Saturday will be a hero and someone will be a villain. It is an incredible feeling.”