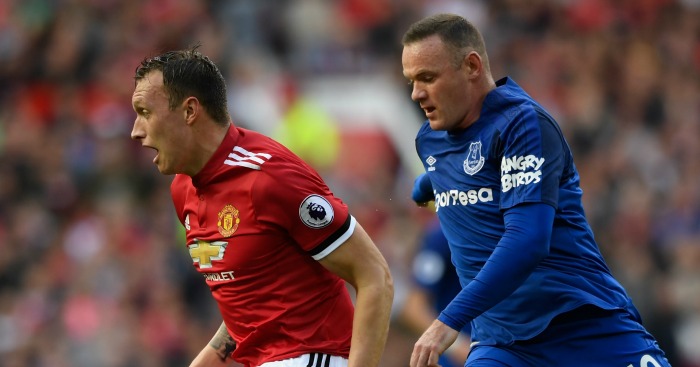 We so very often use our kneejerk reactions from the opening weekend for this annual top ten, but we actually weren’t too far wide of the mark this year.

Also, you might notice that Arsenal and Liverpool do not feature. Things have gone precisely as expected for them…

10. Tottenham did not have enough squad depth
“Under Harry [Redknapp], there were two Premier League-class players for every position. We are finishing even higher under Mauricio but we don’t have that depth now.”

Danny Rose, fresh from frantically deleting his Google search history, was speaking in August. The left-back was reminiscing over a simpler time, when Sebastien Bassong, Niko Kranjcar and Jermaine Jenas resided on the Tottenham bench, not cheap cloggers like Moussa Sissoko, Heung-min Son or Harry Winks.

In Rose’s defence, he was not alone in his assessment, made before Tottenham made five signings to address any potential deficiencies. A Harry Kane injury can now be covered by Son or Fernando Llorente, Dele Alli’s absence can be masked by a simple tactical switch, and Jan Vertonghen and Toby Alderweireld have valuable cover in either Davinson Sanchez or Eric Dier. Erik Lamela has not played since October, and Mousa Dembele and Victor Wanyama are varying degrees of broken, but they have barely been missed. This is a Tottenham side as fluid and complete as any Rose has graced, regardless of his protests to the contrary.

Fifteen games into the season, and 25 players have featured for Tottenham in all competitions this season. That is only two fewer than in the whole of last season, and is testament to the work Pochettino has done to build a balanced and competitive squad.

9. Manchester City’s lack of a midfield would be a problem
‘Why do cash-rich Man City still have a budget midfield?’ was the question posed by this very site in August. It seemed valid: Pep Guardiola had added to an already wonderful attack, improved a troubled defence and thrown money at a new goalkeeper in the summer. In one transfer window the Spaniard overhauled an ageing squad featuring creaking full-backs and a goalkeeper with butter smothered on his gloves by signing five 20-somethings and selling or releasing nine players in their 30s.

But one issue stuck out like a 34-year-old central midfielder surrounded by younger, faster, hungrier teammates. That Guardiola was still seemingly relying on Yaya Toure, Fernandinho and a broken Ilkay Gundogan as his main central midfield options felt like a bizarre oversight from a manager so meticulous and forward-thinking.

As ever, Guardiola knew best. Kevin de Bruyne is in the form of his life in a slightly deeper midfield role alongside David Silva, while Fernandinho is defying his 32 years behind them. As if to prove the point he made in August – “our midfield positions are phwoar, really good!” – he has even found room for Fabian Delph at left-back.

The Welshman has by no means defied all expectations by leading a charge into the top half, but he has outlasted three of his contemporaries thus far. Frank de Boer, Craig Shakespeare and Ronald Koeman have all been ushered out of the door in a drunken state while Hughes has angrily reprimanded each of them for not shaking his hand on the way out.

The pressure has not subsided – three points separate Stoke from the relegation zone after ten games – but most had expected the 53-year-old to be out of permanent employment by October. He remains the fourth-longest-serving current Premier League manager, second only to Arsene Wenger of those who have been in the top flight for the entirety of their reign.

7. Phil Jones wouldn’t play for Manchester United
In the battle for a centre-half place at Manchester United, it always felt as though Phil Jones was more likely to injure himself than emerge victorious. This was a more innocent time, when Victor Lindelof was an exciting £30.75m signing, Eric Bailly was his similarly expensive, ultimately more proven partner, and Chris Smalling was only 18 months removed from being described as “in the top three centre-halves in the world” by Wayne Rooney.

With Marcos Rojo expected to retain his starting place upon his long-awaited return from a knee injury, Jones’ omission when examining the first and second XIs of the top six before the start of the season was understandable. Yet ten games into the Premier League season, the 25-year-old has arguably been United’s most consistently impressive performer. They have conceded as many league goals in 67 minutes without him as in 833 with him this campaign.

6. Kelechi Iheanacho was a brilliant signing
In the never-ending search for sticks with which to beat Pep Guardiola, many questioned the wisdom behind his decision to sell Kelechi Iheanacho in the summer. The Nigerian was emblematic of the new era at Manchester City, the first youth product who had graduated from their much-vaunted academy to the first team. A buy-back clause was inserted into the deal which saw him join Leicester in the summer, but that did little to appease many critics.

According to Iheanacho’s agent, he had not “been treated fairly” by Guardiola. The 21-year-old averaged a goal or assist every 89.9 minutes under the Spaniard, but even Sergio Aguero had to adapt his game to become a more rounded striker. It was widely accepted that Iheanacho’s talents would simply be more suited to Leicester’s style; this was a transfer that suited all parties.

Craig Shakespeare saw fit to spend £25m on Iheanacho, but started him just twice in eight Premier League games. Michael Appleton then handed him 81 minutes to impress against Leeds in the Carabao Cup, and the striker scored one goal and assisted another. He was then an unused substitute against Swansea, and Claude Puel afforded him a solitary minute against Everton on Sunday. He has played 11 more minutes than Ben Hamer in all competitions this season. What a bloody disappointment.

5. Brighton and Huddersfield would both be fodder
Few people gave either of them a chance. Of 90 assorted writers, pundits, experts and drunkards across Football365, the BBC, the Daily Mail, the Daily Mirror, The Sun, the Daily Star, The Independent, ESPN, Eurosport and Paul Merson, 51 tipped both Brighton and Huddersfield to be relegated, 19 thought Town would go down with Hove Albion staying up, and a further 16 felt the opposite would come to pass.

Four people predicted that both would stay up. Here’s to you Tony Evans, Nick Harris, Craig Hope and Marcus Foley. The Seagulls and the Terriers may yet be snared by the Premier League trap door, but right now they are checking out houses in the area and asking what the schools are like. They might just be here to stay.

4. Frank de Boer would do well
Wrong man, wrong club, wrong time. The glare of hindsight exposes the potentially cataclysmic mistake Crystal Palace made in appointing Frank de Boer, and not just because it put Martin Kelly’s nose out of joint.

Far from a revolution, this was supposed to herald the start of evolution at Selhurst Park. The club’s previous five managers had been the bread and butter options of Sam Allardyce, Alan Pardew, Neil Warnock, Tony Pulis and Ian Holloway; De Boer was the continental breakfast choice.

Fittingly, his reign lasted little longer than one meal. Palace had employed De Boer with designs on becoming a stylish club, but only provided a Primark budget. Which is not to absolve the Dutchman of any blame: his last two managerial reigns have lasted a combined 161 days.

3. Renato Sanches was a coup
As Kylian Mbappé was crowned the Golden Boy of 2017 by Italian newspaper Tuttosport earlier this month, minds were cast back to previous winners of the award: Wayne Rooney, Lionel Messi, Cesc Fabregas, Sergio Aguero, Isco, Paul Pogba, Raheem Sterling, Anthony Martial. It is a veritable roll call of phenomenal talents who either went on to achieve wondrous things or surely will do so in the future.

Mbappé will hope to follow in the footsteps of those greats instead of his direct predecessor. Renato Sanches was named Europe’s finest young player in 2016 after bookending his debut season of first-team football with performances belying his teenage years during Portugal’s European Championship success. He was signed by Bayern Munich that summer, but failed to break through in the Bundesliga.

Between them, Grzegorz Krychowiak & Renato Sanches have made 12 PL appearances. And won on none of them.

A loan move to Swansea to link up with Paul Clement once more was supposed to provide a platform for the midfielder, but after an underwhelming start to life in Wales, injuries have hit. The career of one of the most expensive players ever with fewer than 50 league starts has not so much stalled as it has broken down on the motorway and lost three wheels.

2. Burnley would struggle
If the consensus was that Brighton and Huddersfield were doomed, most completed the hat-trick by forecasting doom for Burnley. The Clarets had just finished 16th, cashed in on their two most saleable assets, and spent less than all but Bournemouth and Stoke in replacing them.

The fear was that their imperious home form could not possibly be replicated, and two victories from five suggests that suspicion was not misplaced. But wins at Stamford Bridge and Goodison Park, as well as draws at Anfield and Wembley, have Sean Dyche fighting off a nosebleed in seventh. Their previous Premier League high after ten games was 13th.

1. Everton would be good
The ingredients were all there. Ronald Koeman was a seasoned manager who, although seemingly emotionally detached from the club, had guided them to seventh place, closer on points to sixth than eighth in his first full season. Everton were a club waiting to challenge the Premier League’s elite. Farhad Moshiri was the billionaire backer prepared to make it happen.

The Toffees outspent every club in the summer barring Manchester City and Chelsea. They added eight players to a squad that had already proven to be rather good, but not quite good enough. They failed to replace Romelu Lukaku, yet their decision to become more synonymous with the term ‘No. 10’ than Downing Street was but a fly in the ointment; a training-ground dummy could score if provided assistance by Gylfi Sigurdsson, Davy Klaassen and Wayne Rooney.

Reality has bit hard. Crystal Palace are the only club to concede more Premier League goals, Palace and Bournemouth are the only sides to score fewer, another early cup exit has been sealed, they are bottom and winless in their Europa League group and they have beaten only two clubs all season. In trying to break through the glass ceiling, only their ambitions have been shattered.