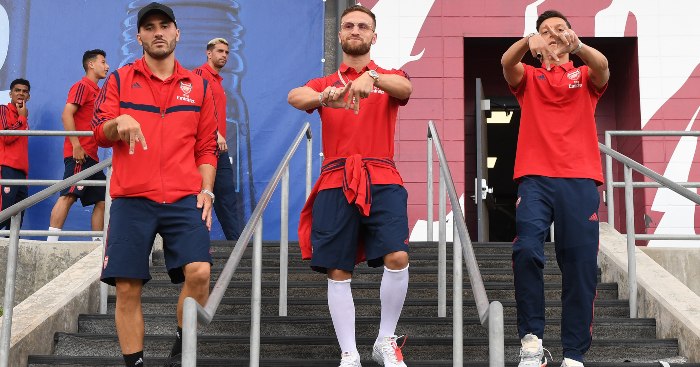 10) Serge Aurier
The Tottenham defender isn’t terrible. In fact, he’s perhaps the best of a bad lot when it comes to Mourinho’s right-back options.

But there’s always something going on with Aurier. Sometimes he gets forward and creates, like he did at Middlesbrough on Sunday. Too often though, Aurier catches the eye for the wrong reason. Whether he’s caught out of position or ambling back towards it, the former PSG star is an exasperating presence in an infuriating defence.

Spurs should have replaced Kieran Trippier in the summer and had they done so, Aurier would almost certainly have been moved on too. Mourinho is hoping they right that wrong this month but he would be advised not to hold his breath. Daniel Levy, innit.

9) Nemanja Matic
The Serbian midfielder was one of Jose Mourinho’s most trusted players at United, while Matic was also among the Red Devils to benefit from the Solskjaer bounce when the Norwegian took over at Old Trafford just over a year ago. But like Romelu Lukaku, Matic was too tainted by Mourinho’s stench and this season, wherever possible, Solskjaer has tried to avoid using him.

And it’s hardly as though the alternatives are up to much. Scott McTominay has gone from being Mourinho’s pet to United’s most credible midfielder. But aside form him, Paul Pogba cannot be arsed, which leaves just Fred, Andreas Pereira and Matic. Fred has improved – he couldn’t get any worse – while no one yet knows what Pereira does, aside from shoot whenever he gets within 30 yards of the opposition goal.

So how come Matic, a former Premier League powerhouse, can’t get a game ahead of that lot? Quite simply, he’s too slow. Too slow now to chase the ball, and too slow to pass it forward when it falls at his feet. Which is strange because at 31, he’s hardly over the hill. But the fact he is out of contract this summer and Ed Woodward isn’t begging to give him a pay rise tells you everything you need to know about his current status.

8) Sead Kolasinac
As a full-back in the modern game, ideally, you should be equally comfortable in defence and attack. Some, like Aaron Wan-Bissaka or Trent Alexander-Arnold, excel in one of those areas. Kolasinac thrives in neither.

The Bosnian tank will prevent your car from being stolen, but Kolasinac is rather less secure when it comes to defending Arsenal’s goal. In fairness, he’s hardly the only unconvincing defender in the Emirates back line, but Unai Emery felt he struggled enough to warrant being replaced in the summer.

Whomever the manager may be, Kolasinac appears a lot more comfortable on the journey forward…but when he gets there, he goes to pieces again.

7) Michy Batshuayi
Three and a half years after joining Chelsea from Marseille for £33million, it is fair to conclude that Batshuayi is simply not the required standard for a top-four chasing side, even one as short of strikers as the Blues.

But Chelsea are so light on forwards at the moment, Frank Lampard is not keen to wave Batshuayi off just yet until he has sourced reinforcements. Villa, Palace and Newcastle have all been keen to take the Belgian on loan and at one of those clubs, Batshuayi would probably be closer to his level.

On paper, Batshuayi’s record looks good. For Chelsea, he has a Premier League goal for every 88 minutes played. But the fact that none of Antonio Conte, Maurizio Sarri and Frank Lampard have trusted him to be a regular paints a clearer picture of his prospects.

6) Eric Dier
The Spurs midfielder has gone from being seen as one of the best holding midfielders in the country to being largely viewed as a liability. Though it is not all his fault.

Injuries and illness have ravaged Dier’s last couple of campaigns and the sight of his name on the team-sheet was one Tottenham fans came to dread. The appointment of Jose Mourinho, though, has breathed new life into Dier’s Spurs career. The England midfielder started five of Mourinho’s first six Premier League matches and the new manager almost certainly wishes he’d started Dier in the one he didn’t – a 2-1 defeat at Old Trafford.

5) John Stones
Stones’ inclusion comes as a result of losing a toss-up with Benjamin Mendy, which perhaps sums up the defender’s last 12 months. We are not yet sure if Mendy is any good, having spent most of his Manchester City career as a crocked £50million cheerleader. But Stones has demonstrated that he cannot be trusted at the centre of Pep Guardiola’s defence.

Stones had a truly, truly miserable 2019. The upheaval in his private life was only overshadowed by his performances on the pitch – when Guardiola gave him permission to actually go on it. For much of the run-in last season, Stones was kept on the bench and during the Manchester derby, the England defender shuffled a few rows back into the stand.

Stones got no respite on international duty during the summer. He was badly at fault in England’s Nations League defeat, which prompted Port Vale striker Tom Pope to pipe up. Of course, when the chance came last weekend, Pope proved his point somewhat, even if he acted like an egg before and after doing so.

4) Phil Jones
I didn’t want to include gurning Phil in this list. The former England defender hasn’t been helped by a shocking list of injuries and the heightened expectation you would expect when Sir Alex Ferguson said that he believed Jones could become one of the finest players to ever play for Manchester United. SPOILER: He didn’t.

Because of the failure to live up to the hype, the 27-year-old is widely viewed as a comedy figure. His most memorable contribution in nine years at Old Trafford? The lowest ever defensive header in history. But typically of the way he is perceived, falling at the feet of Olivier Giroud is regarded as a typically comedic passage of play because of the way he stumbled – as if over a series of rakes – rather than for a brave piece of defensive improvisation. After all, it worked and plenty of other defenders would have given up when they hit the grass.

However, even his managers have come to see Jones as a liability. Mourinho said he knew United were in trouble when Jones stepped up to take – and subsequently miss – a penalty in the shoot-out defeat to Derby last season, while Solskjaer hooked Jones at half-time during his only Premier League appearance of the current campaign, during which he was sent sprawling by Lys Mousset in the build-up to Sheffield United’s opening goal.

3) Claudio Bravo
When Bravo replaces Ederson in the City net, too often it is like Pep Guardiola giving the opposition a one-goal lead. When he has deputised for the Brazilian this season, Liverpool, Atalanta and Dinamo Zagreb have scored with their first shot on target while Everton and Southampton had a sighter before scoring with their second.

This is a concern City have had since Bravo was signed to replace Joe Hart in 2016. He may be tidy with his feet, which is what Guardiola values most in his goalkeeper, but he’s almost useless with his hands.

21 – Of the last 40 shots on target that Claudio Bravo has faced in the Premier League, he’s only saved 19 and conceded a goal with 21 of them. The Opta expected goals on target tally for these 40 shots was just 12.6. Recall? pic.twitter.com/ND2eLvfgEc

2) Shkodran Mustafi
“There’s nothing you can do to coach a defender of his experience now,” said Ian Wright after watching Mustafi bungle another opportunity in the heart of Arsenal’s defence. Emmanuel Petit labelled the most expensive Germany defender in history the ‘king of blunders’.

So it should come as little surprise that Arsenal are struggling to shift the 20-cap Germany international. Unai Emery wanted rid in the summer but no one came forward with an offer suitable for Mustafi or the club, who forked out £35million for the centre-back in 2016.

In Mustafi’s defence, perhaps he was right earlier this season when he suggested the condemnation had become ‘irrational’. There are plenty of defenders at Arsenal who should carry their share of the blame, but that is not to say that the bulk of Mustafi’s criticism isn’t valid. Regardless, Mikel Arteta desperately needs defenders this month.

1) Jesse Lingard
The Manchester United attacker failed to score or create a Premier League goal in 2019. There were 286 players who recorded an assist last year but Jesse Ellis Lingard was not one of them.

“There’s no one who runs as much,” said Ole Gunnar Solskjaer trying to defend the attacker this week, but he could have dressed a Labrador in United’s No.14 shirt in 2019 and the difference would have been negligible. And the dog wouldn’t be trying to flog you its own aftershave for £45 a pop while flailing around hopelessly on the Old Trafford park.

You can’t blame Lingard, 27 (twenty-seven), for teaming up with Mino Raiola because when United finally give up on him, he’ll need a bloody good agent.

FYI If you're looking for a stocking filler for the Man united fan in your life, Jesse Lingard has an aftershave called JLINGZ where customers are encouraged to "Smell like LINGZ". (Reduced to clear). A wonderful gift I'm sure you'll agree. https://t.co/dDFYF5Ua84