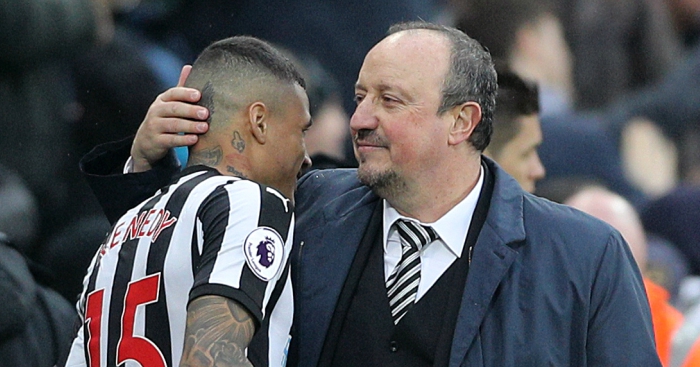 If anything neatly encapsulated Mike Ashley’s infuriating approach to football club ownership, it was Newcastle’s winter transfer window. Of the ten sides in the Premier League’s bottom half on January 31, four broke their transfer record, and four others spent fees on at least one player. The other two were made to fight over the carcass of Daniel Sturridge.

At a time of desperation, when Newcastle were mired in a dogfight in which 11th and 18th were separated by four points, Ashley prioritised keeping his bank balance in the black. The Magpies signed three players and offloaded ten in January; each deal was a loan until the end of the season. Newcastle were trying to keep the relegation wolf from the door by offering mere scraps.

Of the six Newcastle Chronicle journalists to offer a grade of the club’s January transfer window, none rated it higher than a ‘C’. Mark Douglas crowned it ‘a difficult window’, while Chris Waugh admitted it was ‘a pass mark’, but ‘only just’. Andrew Musgrove said that Rafael Benitez had been ‘let down – again’.

Paul Merson gave Newcastle a ‘B’ for their efforts, but his assessment was based entirely on the deadline-day arrival of Islam Slimani from Leicester. The Algerian’s St James’ Park stint thus far comprises of 15 second-half minutes in last week’s crucial victory over Huddersfield, and yet even with his ineligibility against his parent club on Saturday, Newcastle continue to prosper.

The win over Leicester, inspired by goals from Jonjo Shelvey and Ayoze Perez, pulls Newcastle further clear of the relegation battle. They are in the top half of the table for the first time since October, and only Tottenham (22), Manchester City (19) and Liverpool (17) have picked up more points since the start of February. It has been an unexpected, unfathomable rise from a position of weakness.

Those responsible for Newcastle’s vast improvement this calendar year are clear. Paul Dummett has been excellent, while Shelvey and Mo Diame have formed the most unlikely successful midfield pairing. Florian Lejeune is following the impeccable lead of captain Jamaal Lascelles in defence, while Benitez himself deserves the utmost credit. But those unheralded January arrivals have coaxed a level of performance out of this squad that was previously unattainable.

In Kenedy, Newcastle have a player with attacking flair, eager to prove a point after a lack of opportunities at Chelsea. The Brazilian has been a fine addition, with two assists and two goals in eight appearances. No player created more chances for either side (2) at the King Power Stadium, and no player on either side was fouled more often (3) as Leicester looked to nullify his threat. Yet his most telling contribution came off the ball – his run to drag two defenders away from Shelvey before his goal was perfectly executed.

Kenedy is absolutely ridiculous. Just pay the money for him now… #NUFC

As Leicester dominated possession in search of two goals in the closing stages, Newcastle’s priorities switched from counter-attack to simple defending. Leicester had four shots in the final half an hour, but could only muster a Jamie Vardy tap-in against a staunch backline. The organisation of goalkeeper Martin Dubravka should not be understated here: his experience was vital in securing all three points.

The 29-year-old coped admirably with Leicester’s late onslaught of crosses, claiming each with an assuredness unseen under either Rob Elliot or Karl Darlow. The keeper gracefully accepted chants of ‘Oh, Martin Dubravka’ from an away support more than happy to embrace a new shot-stopping hero.

“He’s always talking and encouraging movement,” said Benitez of Dubravka on Friday. Where most felt the club needed to sign a goalscorer in January, the manager decided he could make a necessary improvement on his goalkeeper. The Slovakian has conceded just five goals in his first six games.

BBC 5 live posed the question earlier this week, and it certainly bears repeating: Did Newcastle make January’s most influential signings? The only hope is that Ashley can look beyond the end of his nose in the summer and sanction permanent deals for two players who have won over the Newcastle fans as quickly as they have changed the club’s fortunes.