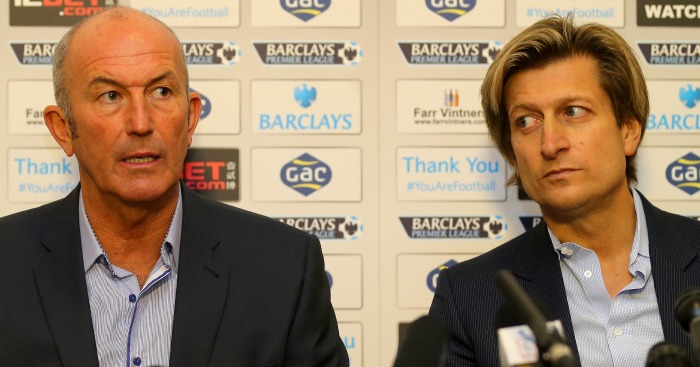 He splits the Mailbox. But Ed Quoththeraven is the latest regular to be given a platform to write something we couldn’t – or wouldn’t – write. So Palace principles it is…

In the early days of organised football, clubs were run by committees, with a chairman in overall charge. While the role is largely unchanged, there is a clear distinction between a traditional chairman and a more modern club ‘owner’.

The main difference is that the chairman would typically be a benevolent local businessman contributing to the successes of his favourite team. With this tradition comes an expectation that the chairman will uphold time-honoured values, such as integrity and loyalty. Although they can attract the ire of the fans, they actually have more in common with them in this age of ‘mercenaries’ for players and managers – an age when things like honouring one’s contract are all-too-often forgotten. However, one club – my own – has a track record of sticking to principles that is simultaneously admirable and frustrating.

Both Simon Jordan and his successors, the CPFC 2010 group headed up by Steve Parish, have made headlines by playing hardball with managers to protect the best interests of the club. Back in 2001, Jordan was pilloried by the media and the League Managers’ Association for having the temerity to prevent ex-Gillingham ace Steve Bruce waltzing off to Birmingham City, on the grounds that he had a contract of employment at Crystal Palace. I know, what a despot, but then, these were the days when the League Managers’ Association would shout about their members being sacked too soon and then go into hiding when someone did one for more money.

More recently, and the inspiration for this piece, is the case of Tony Pulis. Britain’s favourite baseball cap enthusiast took over at Selhurst Park in 2013, and had a level of success few could have predicted. Pulis’s contract contained a £2m ‘survival bonus’, due to be paid before the end of August 2014 – after the 2014-15 season started, making it in effect a ‘loyalty bonus’ too. Having had several potential transfers vetoed by the board, Pulis began agitating for his bonus payment to be brought forward to the end of July. Once he had received his money, the ex-Gillingham boss engineered his departure (by mutual consent) from Palace. This was widely reported as being down to the aforementioned transfers, with pundits queuing up to say that the club should have given Pulis carte blanche to bring in whoever he wanted. However, in spite of the obscene amounts of money coming into the Premier League, Crystal Palace could not afford the sort of net spend Pulis racked up at Stoke City.

That appeared to be that, with most fans disappointed to see Pulis go but understanding the decision to put the club first. Early in March 2016, it emerged that Crystal Palace had won a decision in court, ordering Pulis to repay his £2m bonus and his former club’s legal costs.

These cases, along with Jordan’s notorious loathing of agents, suggest that, behind the bleached blonde hair and Ronseal tan, the Crystal Palace chairmen of recent times have been men of principle, protecting the club rather than putting their own interests first.

This stance was admirable but in the murky world of football, it probably hindered the club more than it helped. Jordan’s insistence that agents take their fees from their clients, rather than clubs, probably prevented a lot of signings – Tim Cahill most notably – that could have helped keep Palace in the top flight. Likewise, with the list of Palace managers in the past 20 years largely reading like a Who’s Who of shite, I can’t help wondering if Jordan’s reputation for arseholing put off a lot of better managers. Similarly, the way that Parish and co handled Pulis’s departure was a PR nightmare, and must have put off potential managers more suited to the Premier League than Neil Warnock.

As Jordan pointed out in his Observer column, it would not have taken many more high-profile club chairmen to co-opt his stance before it became the norm, yet the rewards for conformity greatly outweigh the risks of following a new order. Trying to establish a new game is always a risky move, especially when most people seem perfectly happy playing the pre-existing one.

To borrow from an early episode of That 70s Show, when Donna, having seemingly emasculated her boyfriend Eric by beating him at basketball, refuses to follow her mother’s path of what she sees as subservience to men. Midge’s response sums up how most other teams likely see the dilemma for Crystal Palace fans: “That’s good dear, you stick to your principles, and 40 years from now, you can tell all your cats how you forced a player to pay his own agent.”