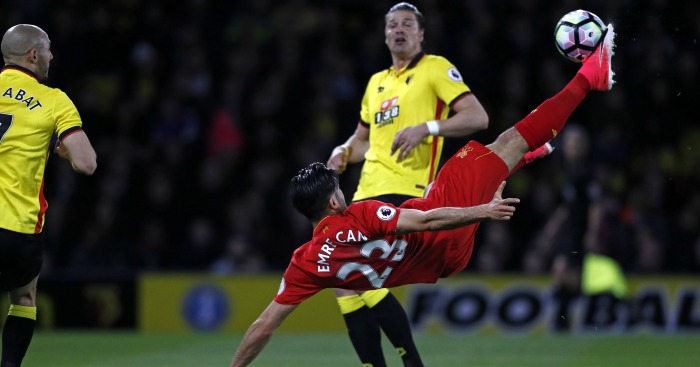 Premier League player – Gary Cahill (Chelsea)
They say the key to comedy is timing, and few have mastered the art quite like Alan Pardew. It’s hard not to agree with the former Crystal Palace manager’s assessment that, if Chelsea have a “weakness”, it likely comes in the form of Gary Cahill. But quite why he chose to bestow such knowledge upon us on Monday, after this of all weeks, is difficult to say.

Cahill stands on the verge of winning a second Premier League title after helping Chelsea successfully manoeuvre two tough fixtures in the space of five days. It was his goal that gave the Blues the lead and settled their nerves against Southampton last Tuesday, and he followed that with a decisive strike to condemn Everton to defeat on Sunday.

Football League player – Aden Flint (Bristol City)
The blue and white bunting had been ordered, the balloons had been delivered, the cheap champagne was on ice and the invitations sent out. Brighton remain the favourites to win the Championship title, but their celebrations were rudely interrupted by Bristol City on Saturday.

Josh Brownhill scored the goal that confirmed City’s survival, with Matty Taylor providing the assist, but it was Aden Flint who was named Man of the Match at the Amex Stadium. The 27-year-old would have given tingling feelings to a sweaty Tony Pulis with each of his 21 clearances.

European player – Benedikt Howedes (Schalke)
Schalke’s clash with Bayer Leverkusen last Friday saw a meeting between two of Germany’s once bright lights, both of which have dimmed in recent years. They are stranded in mid-table obscurity, with Champions League football a pipedream. But Schalke would claim a comfortable 4-1 victory at the BayArena, with Howedes making ten interceptions and scoring in a complete individual performance. Like the rest of his teammates, he has been scrutinised for a tepid season, but the criticism only eggs Benedikt on.

Best goal – Emre Can (Liverpool)
Watford fans have seen plenty down the years. They have witnessed Ben Foster concede to a Paul Robinson free-kick from within his own half. They have enjoyed the managerial reigns of Brendan Rodgers, Malky Mackay, Gianluca Vialli and Billy McKinlay, which sounds like a terrible barbershop quartet. They welcomed the club-record signing of Nathan Ellington in summer 2007 for £3.25million. Ellington would be the club’s most expensive player until October 2014, and now ranks 18th in terms of their largest transfer fees of all time.

Nothing in the Hornets’ recent history left supporters quite as dumbfounded as the sight of Liverpool’s midfield maestro Lucas Leiva playing Emre Can in for the German to find the top corner with a bicycle kick, mind you. Scorpion kicks can bugger off.

Best pass – George Boyd (Burnley)
George Boyd is a player who seemingly existed only in the confines of distance travelled metrics last season, but he proved on Saturday that he is good at doing the ball-kicking thingy. His outside-of-the-boot assist for Andre Gray’s game-sealing strike against Crystal Palace was pretty lovely, particularly for a man whose supposed poor eyesight once saw a move to Nottingham Forest collapse.

Best save – Eldin Jakupovic (Hull)
Since being named at No 8 on our list of the ten best Premier League goalkeepers of the season, Eldin Jakupovic has kept two clean sheets in two games, with Hull picking up four points in their fight for survival. His penalty save in the final minute against Southampton could be the most crucial point of all, and capped another fine performance from the 32-year-old. We claim an assist for inspiring him.

Best collection of saves – Petr Cech (Arsenal)
Petr Cech spoke of being “angry and disappointed” after Sunday’s north London derby. Making nine saves and still losing 2-0 to Tottenham will probably do that.

Best tactical move – Gylfi Sigurdsson (Swansea)
This section of our weekly awards has, to this point, been reserved only for managerial decisions. Be it a formation switch, an inspired substitution or adapting to a particular opponent with a change in approach, Premier League bosses throughout the country are honoured for their bravery and expertise.

Not this week. No, this week we award the cunning of a player, whose tactical prowess rarely falls under the eye of public scrutiny. These are the men who are expected to carry out plans meticulously, not devise them themselves. And while Gylfi Sigurdsson’s tactical battle with Ander Herrera was hardly Pep v Jose, it was hilarious all the same.

Sigurdsson literally put Herrera in 'check mate' the moment he told Llorente to push up. pic.twitter.com/SPQB7snoPw

Worst tactical move – David Moyes (Sunderland)
As aforementioned, the tactical move sections of our weekly awards are often concerned with changes in formation, personnel or approach. What a manager actually says, the message he wishes to convey to his players, is often overlooked.

Not on this occasion, for David Moyes’s rousing pre-match speech to his Sunderland squad really was quite something. The Black Cats had lost their previous game with nothing more than a whimper against Middlesbrough. They had to beat Bournemouth to keep alive their forlorn hopes of Premier League survival.

This required a manager with experience of gritty top-flight battles, so Moyes put on his best wig, painted blue stripes on his face, rode a horse around the Stadium of Light, and turned to a bemused Papy Djilobodji and friends.

“I thought the other night, for what it is worth, whether it is good enough or not, a lot of them played as well as they possibly can,” he said of the defeat to Middlesbrough, who had won four of their previous 33 league games. “Can they play better than that? I am not sure they can.”

Moyes’ suspicions were confirmed, along with Sunderland’s demise, by 5pm on Saturday. If only there was someone who could have inspired confidence at crucial moments.

Premier League loan player – Lewis Baker (Chelsea)
If Cesc Fabregas cannot hold down a regular first-team place in the Chelsea midfield, few would give Lewis Baker a chance. But it is clear to see that the 22-year-old has earned his plaudits after two successful years on loan with Vitesse.

The culmination of the midfielder’s efforts in the Netherlands came on Sunday, when he helped Vitesse lift the first major piece of silverware in their 125-year history. Baker did not score in a 2-0 victory over AZ Alkmaar in the final of the KNVB Cup – that honour was bestowed upon Ricky van Wolfswinkel – but he played a vital role in their journey to that stage, and featured for 90 minutes as AZ were overcome.

Dembele of the week – Ousmane Dembele (Borussia Dortmund)
There were few truly stand-out Dembeles this week. Mousa enjoyed a comprehensive north London derby victory, but only as a second-half substitute. Moussa was sidelined for Celtic’s Old Firm victory through injury. Mana was dropped by Stade Laval, a matter we are taking very seriously.

So the award this week goes to Ousmane, who played just 24 minutes of Dortmund’s Bundesliga draw with FC Koln, but who started the week by helping sink Bayern Munich in the DFB-Pokal semi-finals. One goal and one assist put Thomas Tuchel’s side on course to face 11th-placed Eintracht Frankfurt in the big one.