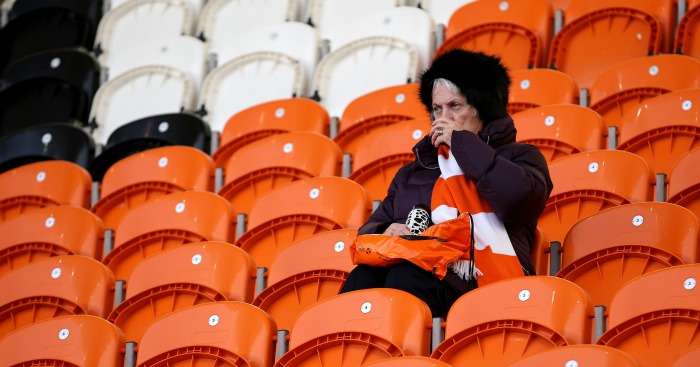 Ted, Manchester, takes a break from his usual Manchester United ranting to write about his other love…

For three seasons Blackpool were, in my humble opinion, one of the most entertaining teams you could possibly watch. If you saw a Blackpool game between 2009/10 and 2011/12 then you probably saw a cracking Blackpool game. Under Ian Holloway they were utterly fearless and approached every match, regardless of the opponent, in exactly the same way: attack, attack, attack.

In retrospect, the job that Holloway did with that ragtag band of unlikely heroes is nothing short of incredible. Before he took over, Blackpool had only been promoted twice in 18 years, but never came close to the top flight. For him to have got them promoted to the Premier League at the first time of asking, after finishing 19th and 16th in the previous two seasons, is incredible; that he did it with just £500k of new signings makes it even more impressive.

In their solitary Premier League season they were unfortunate to be relegated; their total of 39 points would have seen them safe in 13 of the last 20 seasons. On their promotion, only £3.675m was spent (£2.5m combined on DJ Campbell and Andy Reid), so to miss out by a single point just goes to show how close they came to achieving survival on a comparatively minute budget. The season after relegation, Blackpool’s net spend was -£7.45m and still Holloway managed to get them to the play-off final, only to be beaten by an 87th-minute West Ham sucker punch goal. Unfortunately, that’s when the wheels started to come off. There was plenty of call for and, indeed, relief among the fans when Holloway’s eventual sacking came because of suddenly raised expectations, but very few people could have predicted what was to come.

It’s not a wholly unique situation in which Blackpool currently find themselves; plenty of teams have reached the promised land of the Premier League, only to suffer subsequent multiple relegations. However, one of the things that does make their situation stand out is the unwarranted hardship they – or rather their fans – have suffered for seemingly no good reason. After all, their current plight has not been brought about by financial irresponsibility and frivolous spending – Blackpool have the money but the owners are just refusing to spend any of it on either players or facilities. They are almost doing a reverse Portsmouth.

Following their relegation from the Premier League, Blackpool have spent just £1.8m on new players; when you include incoming transfer fees recouped, that total drops to -£11.4m. Player turnover has been incredible too. In the same time period, 54 players have been signed and 61 have left – most of these free transfers.

Now I am all for financial prudence in times of hardship but Blackpool reportedly received around £28.5m in parachute payments over the two seasons following relegation. Chairman Karl Oyston even admitted to a fans’ forum in October 2014 that, at that time, the club had over £25m in the bank, yet manager after manager was refused access to transfer funds. Hardship was never even a distant prospect, so why such extreme austerity measures? At the time, Oyston claimed it was in protest at the fees being charged by agents, but this never seemed realistic; even the noblest of chairmen wouldn’t “fight the good fight” at the expense of their club’s safety. In truth, no one outside the Oyston family will ever really know what happened to the money.

What is certain is that the club has been neglected to levels normally demonstrated by those on the brink of extinction. Complaints about the pitch went on for almost three seasons, players openly disclosed their disbelief at the prehistoric training facilities available – Blackpool’s ‘Centre of Excellance’ and yes, they spelled it that way on the official signage – and three new managers have all needed to build a squad from virtually nothing for the last three seasons. With one week until the first league game of the 2014/15 season, Jose Riga had just nine contracted players on the books.

As things stand, Blackpool have just 12 players contracted beyond the end of this season (until June 2017), supplemented by another 12 whose contracts run out at the end of the season or are loanees. Even manager Neil McDonald (who, despite what a cursory glance at the league table would suggest, has done a good job so far) is out of contract on June 30. The club currently find themselves in 21st position, one point from safety, but all the teams up to 13th have at least one game in hand, so in all likelihood Blackpool will be playing League Two football next season. At this rate, Blackpool are going to be the wealthiest non-league club ever.

Even off the pitch things are looking precarious. Many Blackpool fans have taken to watching other local teams during their self-imposed exile from Bloomfield Road, with Fleetwood picking up a proportion of stray fans. There’s also the ambitious AFC Fylde, chasing promotion from the National League North; they’re nearing completion on an £18m, 6,000-capacity stadium just 15 minutes’ drive from Blackpool.

Indicative of the poor atmosphere at Blackpool is the fact that the inaugural match at AFC Fylde’s new stadium will be the testimonial of Blackpool hero Brett Ormerod, despite being offered free use of the ‘Pool ground. I’ll let the man himself explain: “It breaks my heart the game isn’t at Bloomfield Road but it’s just too toxic there at the moment…With all that’s going on and all the negativity around the place, I didn’t want it to spoil what should be a celebration for everyone. It’s something I had to think long and hard about but I just don’t want to be dragged into the mess at Blackpool.”

The future is not bright and, at this rate, it might not even be orange.