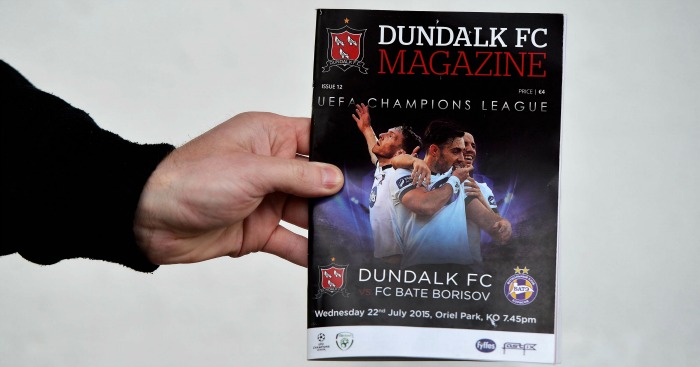 Mailboxer Ryan, Dundalk FC, tells us a tale that starts with a fire threat and ends in the Champions League…

In 2006 Dundalk FC had just beaten Waterford FC in the ‘play-off’ to get into the Premier Division, only to have their hopes dashed when it came to light that the play-off match was actually not a play-off at all but had been played to determine the 12th and 13th-placed teams in the overall standings.

A complete shambles, an injustice, something that only the Football Association of Ireland would be capable of. This outraged fans and one in particular bombarded the FAI headquarters in Dublin on 13th Dec 2006 with a barrel of petrol and threatened to douse himself and the reception to set the place alight. A stand-off lasted for an hour, the protest soon ended, and Dundalk stayed in Division 1.

Fast-forward to November 2012 and the start of a new era for Dundalk FC (who had eventually been promoted in 2009) with the appointment of Stephen ‘King’ Kenny as manager. Kenny had a mixed record, doing well in Ireland with Derry before winning multiple cups and a league win with Bohemians to earn himself a move over to the Scottish Premier League with Dunfermline, where he lasted just beyond a year, assisting in the team’s relegation but also getting them to a Scottish Cup final where they were beaten by Celtic.

Bruised from his experience and subsequent sacking from Dunfermline, Kenny returned to Derry, had a stint at Shamrock Rovers – which went horribly wrong – but finally ended up at Dundalk, where it all just seemed to click for the Dublin native.

Shrewd signings such as Richie Towell, brought in after a disappointing stint at Celtic, Steven O’Donnell, Pat Hoban et al along with a rigorous new training regime meant the future was looking bright for Dundalk, who had just finished the 2012 season in second-last place and secured their Premier status via a play-off win.  The King had a lot to do at Oriel Park if he wanted to taste more success.

In his first full season in charge, Dundalk rose from second-last to second place, finishing the season on 68 points, just three points off eventual winner St.Pats.  A group of players thrown together, many from the second tier, had managed to breed hope into the entire town of Dundalk that something special was going to happen, and they were right.

Keeping the majority of the squad going into the 2014 season (something which is unheard of in League of Ireland as players sign up to part-time contracts and most jump from club to club) and making a few additions, namely Daryll Horgan, Dundalk set about going one step further and winning the league.

Dundalk drew Hadjuk Split in Europe, arguably the toughest of all ties they could have hoped for. We lost 2-0 at home and actually beat them 2-1 in Split, which was a massive result for a team of the stature of Dundalk.

Two teams battled for the crown of champions and it boiled down to the last game of the season: Dundalk vs Cork City.  Cork led going into the game by one point and it was a winner takes all situation.  The buzz on that day was something I’ve never experienced.

As an Arsenal ‘fan’ I enjoy watching the Gooners win, but to be there watching my home team win was something special. Dundalk ran out 2-0 winners, the title was ours, there was a week-long party, I drank my body weight in Harp.

In 2015 it was much of the same from Dundalk – head and shoulders above any of their rivals and eventually running out comfortable winners of the league. King Kenny had taken over a side that just about remained in the division, and made them double league winners of Ireland.

Hearing the famous Champions League song bellowed throughout Oriel Park was something special, being dumped out by BATE Borisov, who went on to make the group stages and beat AS Roma and draw with Leverkusen, was some feat for a team with a stadium which holds just over 4,000.

2015 was all about one player, though. Richie Towell. Without question the best player to have played in the league for 10-plus years. Towell played as a box-to-box midfielder, had energy levels through the roof and carried the team to a league and FAI cup double, fittingly scoring the winner in the cup final against our old foes, Cork City. He would go on to score 25 league goals that campaign, from central midfield. To put that in perspective, the second top scorer got 13 and was a striker, Karl Sheppard.

There were calls for Towell to get a call-up to Martin O’Neill’s Ireland squad, and rightly so. Here was a player who was so far ahead of his peers, yet this was overlooked by the international set-up, which is so often the case in League of Ireland.

Towell was on the move and there was no shortage of potential suitors, eventually signing for Premier League hopefuls Brighton.  He has gone on to make just one appearance in an FA Cup game, and finds himself regularly not even making the bench. I suppose here is where you see the difference between being the best player in a league full of part-timers – who are largely forced to sign onto the dole at the end of the season – and cutting the mustard in a Championship side, justifying Martin O’Neill’s decision not to listen to the calls for him to be included.

A beautiful tale, and we currently sit top of the league, although only seven games have been played.  Friday nights are League of Ireland, Friday nights are Oriel Park, and boy does it feel good to have a long summer of Friday night football ahead and hopefully another week-long binge on Harp lager come the end of October.