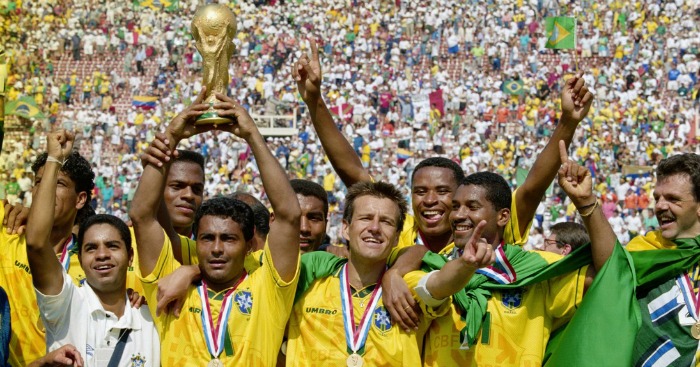 Mailbox regular Bradley Kirrage remembers all the things that were great about USA 94. It’s even made him a little teary…

The most enjoyable World Cup I have experienced was USA 94 – a strange choice to some, maybe, but there are various reasons that I believe this to be the last great World Cup and we will never have it so good again.

Firstly, it was a tournament that England missed. I know this makes me totally unpatriotic but whilst it is always great to get behind your nation, it has been massively noticeable over the years that when England grace a tournament, the coverage is all about them and no-one else. Once again the media believe that everybody thinks the same way they do and just want to talk England. I can’t speak for anyone else but this view is bloody annoying.

I think my disdain for this plateaued during Japorea 2002 when a program started and Des Lynam opened up with this: “Welcome ladies and gentlemen for today’s match between Mexico and Croatia but let’s go straight to the England camp to get an update on David Beckham’s metatarsal.” No Des! Let’s not go straight to the England camp to hear Beckham talking inanely about an injury that obviously is okay, otherwise he wouldn’t be in the sodding squad! Let’s hear about Mexico and Croatia. Talk about how incredibly Croatia reached the semi-finals of the last World Cup with Davor Suker winning the Golden Boot. About how Mexico always seem to be really good in the group stages but then bomb out in the second round (94, 98, 02, 06, 10 and 14 this has happened now).

So this was why I loved USA 94. It reviewed all of the teams, all of the players, had lovely montages about the different teams like Nigeria, Bulgaria etc. We had in-depth analysis of players we didn’t know about and all teams had coverage. When England grace a tournament we wave good-bye to this and it’s really a sad thing.

This brings me to my second reason. In those days we hardly got to see world stars in action. The only thing we had was one Italian match on a Sunday (Gazzetta Football Italia – an article on its own) but in terms of the Spanish, French, German and Dutch leagues, there was no way to watch these players. So when the World Cup descended, the excitement of being able to watch the likes of Baggio, Romario, Hagi, Stoichkov, Klinsmann, Batistuta, Maradona, Hierro, Bergkamp, Scifo etc was just so exciting. Added to that, you didn’t know half of the players going there so when someone you didn’t know caught your eye, it was so bloody marvellous.

I remember the pure joy of watching Alain Sutter of Switzerland for the first time. It was their second game against Romania (who had just demolished one of the favourites Colombia 3-1) when he took them apart. Switzerland won that match 4-1 with Sutter scoring the first. He had the most amazing mane of blond hair and he played like a star. After the tournament he got his big move to Bayern Munich where he was rubbish and never seen again. That only adds to the greatness. Obviously Letchkov of Bulgaria made a name for himself with that header against the Germans to knock them out. The three-piece striking axis of Brolin, Andersson and Dahlin for Sweden that helped them to third place was magnificent and they even had a young dreadlocked striker on the bench called Henrik Larsson. That Nigerian team of Yekini, Amokachi, Amunike and a young Jay-Jay Okocha that were incredibly entertaining and were cruelly knocked out in the second round after being a minute away from beating Italy. So many good players, so many great moments.

Reason 3 – The controversy. It’s a tired thing when people say we don’t like to see that. The truth is we do. We love it. And USA 94 had plenty of it on and off the pitch. We had Mauro Tassotti getting an eight-match ban for breaking Luis Enrique’s nose with an elbow. We had Leonardo sent off for possibly the worst elbow I’ve ever seen that seemed to put Tab Ramos into some sort of seizure. We had Maradona being sent home for testing positive for drugs. We had Steffen Effenberg sent home for flicking the finger to his own fans.

Off the pitch we had Eric Cantona punching someone for sitting in his commentary space. We had the classic Dutch arguing which led to Ruud Gullit pulling out. It was incredibly colourful and fun, we even had Gianfranco Zola getting a red card. Zola for goodness sake! Obviously we had the horrifically tragic story of Andreas Escobar of Colombia. Needless to say this wasn’t a controversial moment but an awful one. If you don’t know the story then look it up. Truly horrible.

Reason 4 – The characters. Football today just doesn’t have the sort of oddball players we had then. We had Phillippe Albert, who looked like a giant porn star but was actually a terrific footballer. Trifon Ivanov who started the tournament clean shaven but ended it with a full bushy beard. I loved the way when he was fouled he would get up instantly to look at the back of their shirt. You knew that person was in for it later. Jorge Campos, the Mexican goalkeeper who was also a striker, a relative midget for a goalkeeper but was incredibly agile and wore the most ridiculous shirts that believe it or not he insisted on designing himself.  Roger Milla playing at the age of 42 and still dancing by the corner flag.

Finally and possibly the greatest character in football history – we had Alexi Lalas. Part-time heavy metal guitarist and full-time wild man. He had long curly ginger hair with the most magnificent ginger goatee beard. He was just pure hilarity and the fact he was always interviewed after the game shows that the TV channels agreed. Alongside him in the USA defence was Marcelo Balboa, another who looked like a porn star but he had a reputation for scoring spectacular overhead kicks. Just take that in, a centre-back with a reputation for overhead kicks. Indeed, during the group stages he almost scored the greatest World Cup goal of all time. You can see it here….

Reason 5 – Spectacular goals. For whatever reason, you just don’t tend to see a lot of great goals in the World Cup anymore, especially free-kicks. Yet in this World Cup we had great free-kicks from Georges Bregy, Eric Wynalda, Ilie Dumitrescu, Branco and Hristo Stoichkov (who actually scored the best one against Nigeria but it was ruled out as it was indirect). But some of the goals in this tournament were fantastic. There was Hagi’s ridiculous goal against Colombia, Ernie Stewart finishing off a fantastic passing move for USA also against Colombia, Klinsmann’s turn and volley against South Korea, Wim Jonk’s 30-yard blast, Dino Baggio’s 30-yard blast, Roberto Baggio’s run and finish in the semi-finals against Bulgaria, Brolin’s clever free-kick against Romania, Amokachi’s stunning run and smash against Greece, Batistuta and Maradona both scoring great goals against Greece. Of course Ray Houghton’s chip against Italy and finally the unheard of Saeed Al-Owairan for Saudi Arabia beating about five players before finishing against Belgium. Truly stunning.

Reason 6 – Goalscorers and stories. It’s fantastic when you have a World Cup where top strikers and players score lots of goals and are in contention for the Golden Boot. It doesn’t happen often enough now but in this tournament you had Hristo Stoichkov sharing the Golden Boot with Oleg Salenko (more on him in a sec) with six goals, Romario, Roberto Baggio, Jurgen Klinsmann and Kennet Andersson all scoring five goals, Gabriel Batistuta, Martin Dahlin and Florin Raducioiu all scoring four goals and the likes of Dennis Bergkamp, Bebeto, Gheorghe Hagi and Tomas Brolin all scoring three goals. All players with reputations going into the tournament and performing. Magic.

The stories were great too. Oleg Salenko scoring five in one match against Cameroon which also happened to be the same match where Roger Milla became the oldest scorer in history at the age of 42. The rise of the Nigerians, Romanians and Bulgarians. Germany getting knocked out by Bulgaria. The Mexico v Bulgaria game being stopped for ten minutes because the Mexican Bernal somehow pulled the net down and wrecked the goal and Belgian goalkeeper Michel Preud-Homme producing in my opinion still one of the greatest displays of goalkeeping against the Dutch.

Reason 7 – My age. And I finish with this. I was nine during Italia 90 so whilst I watched like everyone else I couldn’t do much with it. I wasn’t allowed to see all the games because of school etc plus it wasn’t a particularly great tournament. During USA 94 I was 13, I had freedom, I no longer lived on a concrete estate but now had a huge park behind my house where my brother and good friend from next door and my other mate from up the road would watch the games and then rush off to try and do what we had just seen. It was like our own version of Fantasy Football’s ‘Phoenix From The Flames’ and that summer it was hot. It was magical and it was the stuff memories are made of.

I have actually started to get a bit teary writing this because this is what made this World Cup stunning and a truly great tournament. There is a two-hour-long video on Youtube called the story of USA 94. I urge you to watch it to experience how truly special this tournament was. To end I will put the link to a video to a lovely montage of action set to Enigma’s ‘The Return To Innocence’.

Here’s to the memories.