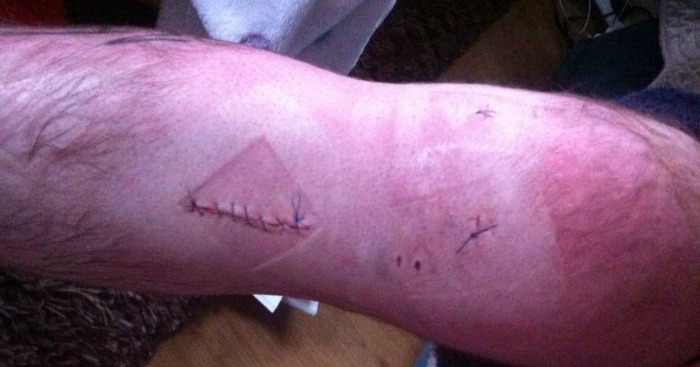 Mailbox regular Jonathan R. Smith tells us about the long road back from an ACL injury. The poor sod.

A few weeks ago, I checked out the recommended reading on F365 that led me to Nottingham Forest defender Gregor Robertson’s article. Really great read and really struck a chord with me.

As this season began, we witnessed the likes of Callum Wilson, Max Gradel, Tyrone Mears, Danny Ings, Joe Gomez and later Tim Krul all suffering ACL injuries. While everyone sympathises heartily with the unfortunate sods, there are a great number of people out there that won’t understand just how difficult it is to come back from this type of injury.

Before I tore the majority of my right ACL a few years back, my previous ‘serious’ injury list read: broken finger, broken arm. A broken finger is almost negligible pain-wise, while a broken arm represented a step up in the pain stakes as it needed to be reset. Nasty stuff. I’ll never forget the queue of players lining up to confirm, ‘Yep, that’s broken’. Cheers guys, the U-bend that was then my lower arm and wrist kind of gave that away. It was that break that set the bar for my tolerance to pain when it came to injuries, but my tolerance levels would later be smashed like the contents of a tube of discount Pringles bought at B&M.

What makes the ACL such a cruel mistress is that, more often than not, there’s no malice or ugly tackling involved – I’m the third of four brothers to have done this and we all suffered the injury on the pitch with almost no-one nearby, just an awkward change of direction and SNAP. My particular situation differed in that there was additional pain to come. I just had to one-up my brothers eh?

As I stepped out of defence to go and attack a long ball that had bounced and hung high in the air, my knee went from under me, the problem being that my French teammate had not listened to my call and had too gone to head the ball, thus already ‘up like a salmon’. As I came to a halt on the ground, I realized that my tumble had ended right under my airborne teammate, at which point his arse essentially landed in my face and the rest of him flattened me like a punctured beach ball. I didn’t know where to hold – EVERYWHERE hurt! I had never felt pain like that, to the point that I couldn’t even tell the opposing players, claiming I’d dived, to “***k off”, such was the extent of my cries.

After visiting the hospital, it was finally determined that I had a minor fracture in my lower right leg, my ACL was roughly 85-90% torn, and less seriously, my face would smell like a sweaty Frenchman’s backside for 2-3 days – merci Benoit.

Fast forwarding to after the operation – surely I’d wake up from the drugs feeling much better now that my op was done and dusted? Ho-leee sh*tballs, I couldn’t have been more wrong – my entire lower leg was essentially one giant bruise, and I had black marker scrawled on my leg for insurance and liability purposes to ensure they had operated on the correct knee.

What I didn’t know was that the doctors encourage you to get up and try to use your leg almost immediately. With the leg so swollen, every step was agony and as the blood rushed downwards. Every trip to the bathroom was excruciating, to the point that you half contemplate p**sin yourself instead of getting out of bed. Returning home, you have these exercises that look bloody simple – they’re anything but. I won’t go into detail but the simplicity of these exercises makes it all the more frustrating that they have become so difficult to do. And that’s when you realise that your recovery is going to be extremely tough, and that no, there is no way to take shortcuts, especially if you intend to resume playing footy. It was Christmas and of course with everyone around you merry and getting leathered, and what with me feeling sorry for myself, all you really want is to get wasted (even willing at that point to down one of Reidy’s concoctions) but you can’t because you’re on heavy painkillers. Want to play Wii Jon? NO, because every damn second standing is causing the swelling on my leg to ache, worse than any migraine or toothache you can imagine.

Now, consider for a moment that I play amateur football, for fun, with no expectations placed on my ability upon returning to the team. I have tried my best since returning to play but can’t deny that I don’t panic when someone comes in hard on me. Imagine then just how hard it is as a professional to come back? While the physical part might seem ‘doable’, the mental side of things is far more difficult to overcome. Sure, they have physios etc. helping, but the main battle is psychological. You’re in so much pain that it’s easy to not try as hard or to feel sorry for yourself. There must be constant doubts and hypotheticals running through a pro’s mind – will I be able to get back to the level I was at? What if I can’t? Will I lose my place? Oh God, what if the team decides to cut my contract short?

By writing this, I wished to share the agony and downright frustrating nature of the ACL injury, but even more importantly, I wanted to simply to say how much respect I have for the players that come through these long-term injuries and continue playing at a decent level – moreover, I greatly admire the players that not only recover, but actually come back stronger and better than before. The time passes seemingly quickly for fans, but for the player it’s an incredibly long road back.