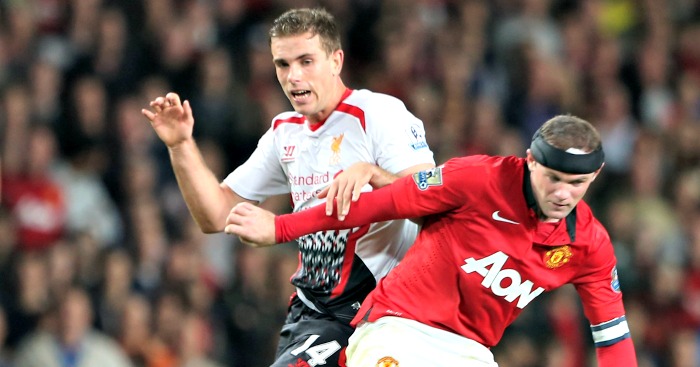 It’s time for another Mailbox regular to write a piece we couldn’t – or wouldn’t write – and this time it’s Andrew Rawcliffe writing Enablers and Disab… ahem, ‘Burdens’…

I’d like to put forth what I perceive to be an often underrated concept, or quality, in football. Indeed, it’s hard to define, but I have somewhat clumsily labelled it ‘The Enabler.’ It’s perhaps wise to start with a definition:

Enable – to make possible or easy; to give power.

The enabler then, is a player who ‘makes things possible or easy’. More specifically, a player who improves the performance of those around them. There is a temptation to jump to a cliché at this point, namely the ‘every team needs one’ type of player; the player who does the running of the more gifted individual, the stereotypical unsung hero that does the ugly stuff. Embodied by hard work, energy, discipline, and dare I say it, passion. I’m sure there are names on the tip of your tongue right now. Owen Hargreaves and Dirk Kuyt would surely fit the bill, but there are countless others.

The enabler can be so much more than this. If we look for players who improve the performance of those around them, it would be hard to ignore the likes of Zinedine Zidane, Dennis Bergkamp or Mesut Ozil. The glue that holds an attack together, a player that appears to belong to a higher plane. The conductor – though they are often lauded for other attributes. Perhaps it is a goalkeeper whose mere presence instils confidence in the defence, intangibly solidifying them as a unit? Or is it that player who keeps things ticking over in the middle of the pitch? Gareth Barry and Michael Carrick have long been underrated proponents, but Gilberto Silva was a joy to behold at Arsenal in this regard.

There is a special case I’d like to look at; a player who epitomises the concept of the enabler. Jordan Henderson. Let’s get this straight from the outset: Jordan Henderson is, by Premier League standards, not excellent at anything if we consider a set of discrete skills. His shooting, passing and tackling could all be improved. Nor is he an apparently intelligent, clever or skilful player. He’s not that strong, he’s not that quick. So what does he bring to the party?

Here, we begin to define the essence of the enabler. Jordan Henderson excels at the intangible. I couldn’t say if it’s by luck or by judgement, but at his best, he manipulates space extremely well. In possession, his tireless running creates space for those around him to play; he disrupts the opposition’s shape. In transition, he finds himself in areas where other players can’t reach because of his energy. Out of possession, he cuts off angles, he presses and closes down, he covers for teammates.

We start to be able to pin some characteristics on our enabler at this point. Efficiency; appreciation of space; excelling at the intangible.

In all good stories, the hero needs a villain. If an enabler is a player who improves the performance of others, it follows that there could be players who impede the performance of others. I could call this player ‘The Disabler,’ but that might cause issues, so let’s settle on ‘The Burden.’ A brief point: There’s a danger of categorising certain players as burdens who don’t technically belong there. Case in point is one Michael Owen (if we ignore his contribution to broadcasting). Owen was a player who had a very specific role within the team, and he carried it out with a degree of excellence. He was a player who relied upon enablers, and contributed very little else. However, by not being an enabler, it doesn’t follow that he was a burden. His contribution to those around him was, if anything, neutral.

There is a very obvious, high-profile example of a burden: Cristiano Ronaldo. He has a selfish style of play. He demands the ball in sub-optimal positions, and he elects to shoot when others are better placed, thus reducing the performance of those around him. However, it would be hard to argue that Real Madrid would be better off without him. His individual level is so high that his sub-optimal behaviour has a higher chance of success than others at peak efficiency. So, there is room within the team structure for a ‘burden’.

However, this isn’t always the case. Take Wayne Rooney as an example. Despite popular opinion, Rooney is a technically excellent footballer – provided he’s not returning from an injury. However, he is perhaps one of the worst offending ‘burdens’ in football. He is a player that is difficult to define in terms of his role, which at first look, would perhaps put him in the enabler category. However, in Rooney, this materialises as a tendency to play in the space of others – a gripe of Robin van Persie’s when he was at United. There is also a lack of efficiency, his technical ability dictating, at least to him, that he has to do ‘something’ when he receives the ball, resulting in slow play and a reluctance to do the simple things.

Life as an enabler isn’t always easy. Imagine being cast as a 6/10 player despite the fact that you contributed more towards the victory than the person who took a couple of free kicks and got two assists. The enabler is the middle child of football. Difficult to categorise, and carrying a set of skills that can never be reflected in an increasingly statistical world. It is no surprise that this drives behaviour. Even this season we have seen our textbook enabler, Henderson, attempt to play more like seasoned burden, Steven Gerrard. He’s looked much worse for it. Perception is everything, and generally, burdens grab the headlines. Burdens move for big money and they adorn the backs of shirts worldwide. Who wouldn’t want to be a burden? Footballers aren’t the most self-effacing types, after all.

However, there may be light at the end of the tunnel for the enabler. Oft-maligned and increasingly marginalised, it’s possible that the enabler just became cool again. As Chelsea, Manchester United and Manchester City, with their teams full of burdens, have failed to sustain a title challenge this season, Leicester and Tottenham have fielded teams full of enablers with very few burdens. Germany won the World Cup with the same approach. It’s just possible that the penny has dropped. But, it’s also plausible that the enabler will remain at the margins, unappreciated by the masses, but loved by a few.