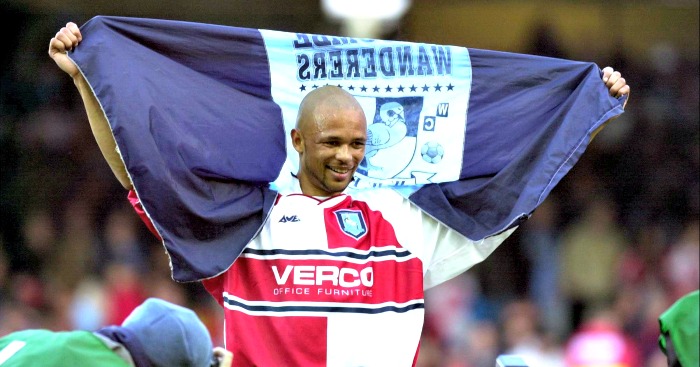 Roy Kabina Gina Essandoh is not a name familiar with football supporters. In fact, unless you are a Wycombe Wanderers fan like myself, you’d be forgiven for having no recollection of him. His list of 21 clubs (thanks, Wikipedia) is quite something. Included are Rushden & Diamonds, Barnet, Cambridge City, Gravesend, Kettering Town. It reads more like a low-budget comedian’s tour schedule than a footballer’s career.

The 2001/01 season was memorable for Wycombe thanks to a fantastic FA Cup run. In the old Division Two at the time, we beat Division One sides Grimsby, Wolves and then Wimbledon in a dramatic penalty shootout to setup a quarter-final with Premier League high-flyers at the time Leicester. The league form suffered dramatically throughout the cup run, although no one particularly cared. Lower-league fans will tell you that they’d much rather a run in the cup, than a solid season in the league.

In the build-up to the quarter-final, we had an injury crisis, leaving us with just one recognised striker. Not ideal before the biggest game in the club’s history. Leicester at the time were eighth in the Premiership, with players such as Muzzy Izzet and Robbie Savage in their prime. In the days before internet databases of free agents, Wycombe took the unusual approach of putting out an advert via Ceefax to try and sign a striker. Roy Essandoh, fresh from being released from mighty Finnish side Vaasan Palloseura, applied and impressed enough at a trial to earn a lucrative two-week contract and a place on the bench for the quarter-final.

The game itself was incredibly nervy. I was sat at the back of the Wycombe end and as the game went on, you could sense the atmosphere of the home ground beginning to shift, as their side couldn’t score a goal against a side two levels below them. Half time came and the mood among the Wycombe fans was jubilant; the dream of a replay back at Adams Park was alive. Goals were swapped and our manager at the time, Lawrie Sanchez, was sent off for furiously debating what looked like an obvious penalty so had to watch the remained of the game from a ridiculously small TV in the away dressing room.

As extra time petered out, Wycombe won a free kick on the halfway line. A long cross forward and a knock down from centre-back McCarthy was met by late substitute Essandoh and we all went wild. His first and only goal for Wycombe had sent us into the semi-final of the FA Cup. A footballer who had never scored a club goal in English football, signed from Ceefax, had sent his Division Two side into the semi-final of the most famous competition in the world.

The semi-final against Liverpool didn’t have the same fairy tale ending, a respectable 2-1 defeat courtesy of Gerrard and Fowler ending the dream. But Wycombe fans didn’t care. We’d had our day out (a town of 50,000 had taken 24,000 to Villa Park), and we had memories that would last forever.

There’s a lot of talk of what the FA Cup means and whether we should get rid of replays, reduce the number of rounds etc. This, in my opinion, would be a huge mistake. The memory of that cup run is a constant reminder to me of just how much the old competition means.