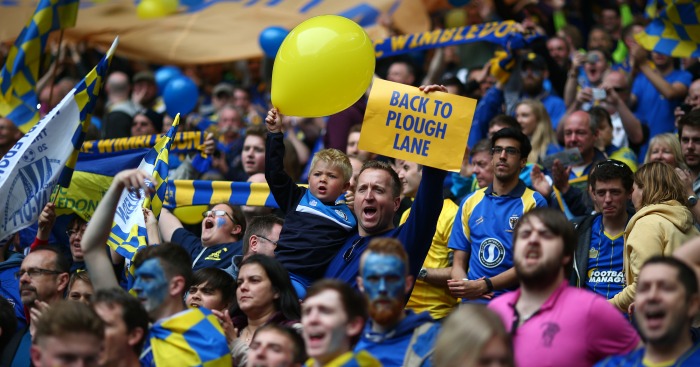 It is an unseasonably cold, rainy night on May 28th 2002. Lightning forks the sky and the winds howls around the jet-black castle where three men sit in audience with Peter Winkleman. The only light comes from a fire in the corner of the room flickering on its last embers. The three men listen in trepidation to Winkelman’s malevolent scheme to destroy the town in the shadows of his castle. Winkleman finishes speaking and lightning illuminates the near-pitch-black room; his two henchmen, Mr. Ikea and Mr. Asda, appear as if from nowhere to stand intimidatingly behind the three men seated at the table, and Winkleman himself laughs maniacally while stroking his pure white cat.

Okay, so this is probably not how the story of Wimbledon being relocated to Milton Keynes actually went nearly 14 years ago to the day, but what did happen was the most unprecedented act in English football – brazen commercialism turned up to 11 and two fingers stuck up at the fans who make the game what it is. After a year of haggling, fan protests and boycotts, financial trouble and a rejected appeal, Winkleman finally got his wish as the three-man FA-appointed panel voted 2-1 in favour of approving the relocation of Wimbledon 50 miles away to Milton Keynes.

Upon reaching the decision, the panel now infamously stated that ‘resurrecting the club from its ashes as, say, ‘Wimbledon Town’, is, with respect to those supporters who would rather that happened…not in the wider interests of football’. Fourteen years and six promotions later, the phoenix that emerged from that scandalous decision in 2002 has stuck two fingers up right back. Lyle Taylor’s 78th-minute strike and Adebayo Akinfenwa’s penalty deep into stoppage time sealed AFC Wimbledon’s promotion to League One on Monday in the League Two Play-off Final. Next season they will come face to face with MK Dons for the first time in the league. It is a remarkable achievement in so short a time, and a story to give fans near-universal cheer in times when there appears to be such disconnect between fans themselves and the clubs they support. This is a very modern fairytale, and begins as all good stories should: with three friends having a drink in a pub…

Kris Stewart, Marc Jones and Trevor Williams met in The Fox and Grapes on Wimbledon Common two days after the decision by the FA panel. Already angry at being told by their own chairman that the club did not have ‘firm and extensive roots within the conurbation from which it takes its name’, the panel’s decision was the straw that broke the camel’s back. Attempts over the previous tumultuous year to affect a positive change within the management of their club had proved futile. The message was clear: the fans do not make the club.

So they decided to do exactly that. Two weeks later, AFC Wimbledon had been formed with a new stadium found in the neighbouring borough of Kingston Upon Thames at Kingsmeadow, the vacant manager’s post had been filled by ex-Wimbledon player Terry Eames, a new kit and crest had been created, and the team had been accepted into the Combined Counties League (seven tiers below where Wimbledon had finished the 2001-02 season). On 29th June, the club held trials on Wimbledon Common, available to anyone who thought they were good enough; 230 players turned up. From that, Eames selected his squad for his first game, a pre-season friendly against Sutton United. Average attendances were 50 for Combined County League teams; 4,657 fans turned up.

Ivor Heller, another one of the founders and current Commercial Director, gave an interview at the start of their first season in which he stated: “We’ve got two aims: to build a successful team on the pitch and build our own ground somewhere in the borough of Merton.” Whilst the latter was some way off, the former would be achieved almost instantaneously and with remarkable consistency in those fledgling years. In their debut season they finished third and narrowly missed out on promotion, but four promotions in six years – including three as champions – moved AFC Wimbledon up from the Combined Counties League to the brink of the Football League as they ascended to the Conference National at the end of the 2008-09 season.

Two years later they finally cracked it on 21st May 2011 as AFC Wimbledon beat Luton Town 4-3 on penalties at the City of Manchester stadium in front of a crowd of 18,195 with top scorer Danny Kedwell netting the winning penalty. “It only took nine years,” sang the fans, and still do to this day. The Dons had just achieved something wonderful: become the first club founded in the 21st century to be promoted to the Football League.

It would be foolish though at this point to think that everything had come easily for AFC Wimbledon and their fans. Immediately after their promotion to League Two, the Dons barely managed to keep their heads above water to avoid dropping back down into non-League football. For their first four seasons in the Football League they finished no higher than 15th, including a 20th-place finish in the 2012-13 season when they survived on the final day, sending Barnet down in their place.

And then there was the shadow that hung over the whole club. MK Dons. The Franchise. Despite seeing MK Dons relegated to League Two in the 2005-06 season, they were promoted back to League One in the 2007-08 season, built steadily on that progress and moved up again to the Championship in the 2014-15 season. The much-feted first match between the two ended in disappointment as AFC Wimbledon lost 2-1 in the second round of the FA Cup in 2012 at Stadium mk, and then 3-1 almost two years later in the first round of the League Cup at the same venue.

A nasty and long-running argument had run between the two clubs over the legacy of Wimbledon FC’s successes and history. MK Dons initially claimed the honours as they were the continuation of the original Wimbledon and Winkleman said AFC Wimbledon’s founders had betrayed their club and “left their team before their team left them”.

The Football Supporters Federation were very much on the side of AFC Wimbledon and advocated since the relocation to Milton Keynes that MK Dons fans not be allowed entry to the FSF, friendly games should be avoided and games at Stadium mk boycotted. This was resolved just over five years later in August 2007 when MK Dons relinquished their hold on the history of Wimbledon FC prior to 2004. Memorabilia and trophies, including the replica of the FA Cup commemorating their victory in the final over Liverpool in 1988, were shipped down by MK Dons to Merton Council for display in the public library a year later. Almost home, but still not quite in the stadium, whilst a campaign from the Wimbledon Guardian to have MK Dons drop the ‘Dons’ part of their name has so far fallen on deaf ears. Not so much two steps forward and one step back, but rather each step forward earned the hard way.

Such has been the path to Heller’s second aim: a stadium back home in the borough of Merton. AFC Wimbledon have been playing at Kingsmeadow from the outset, but the capacity of 4,850 places a glass ceiling on the level that AFC Wimbledon can reach with such lowly match-day revenue. This season it was the smallest stadium in the Football League.

However, after years of negotiation between Merton and Wandsworth councils, local developers and residents, and other nearby clubs, Heller got his wish. In December 2015, Merton councillors unanimously approved plans to redevelop Wimbledon greyhound stadium on Plough Lane to an 11,000 all-seated stadium, with the potential to increase the capacity to 20,000. The lease for Kingsmeadow was sold in turn to Chelsea, who proposed using the stadium as a venue for their youth and women’s teams.

However, at the end of March this year then-London Mayor Boris Johnson called the plans in for a comprehensive review, despite approving them in December, and development has been placed on hold until the review is carried out by new London Mayor Sadiq Khan. Another obstacle for this club to jump over, but as Chief Executive Erik Samuelson says, “To get where we are today we’ve overcome much bigger hurdles than this one, and I remain very optimistic that we will succeed.” Strength through adversity may as well be the official club motto.

It’s this intrepid spirit that has come to epitomise AFC Wimbledon. They are the team that nearly every fan can relate to, and possibly aspire to be too. Success without overlong stagnation, goodwill that money can’t buy, a tangible feeling of community at the very core and a club board of fans for the fans. In a sense they pose an existential crisis to the football paradigm of the 39th game, European Super League aspirationalism at all costs of the Premier League era within English League football.

For AFC Wimbledon it’s the notion that ‘fan’ and ‘club’ are interchangeable. Read back through the previous paragraphs and every time that ‘club’ is mentioned, replace that with ‘fan’ and ask yourself, does it really make much difference? This is what AFC Wimbledon stand for: the club and fan as one, united in their goals and direction. In that interview at the start of the 2002 season, Heller said: “Our success so far shows that fans who don’t like the way their club is being run have an alternative – to set up their own club. People should never, ever underestimate the fans.” Quite so, Ivor. And that was 14 years ago, before a ball had even been kicked in anger. Imagine what it says now.

The fairytale was finally completed on 30th May 2016, 14 years to the day since three men in a pub decided that a football club should represent more than the corporate needs of a greedy and opportunistic owner; the refusal to allow the club that they loved to be consigned to the history books as a transferable franchise with an asterisk beside their name like the Brooklyn Dodgers (Baseball, moved to Los Angeles in 1958), the Cleveland Browns (American football, became the Baltimore Ravens in 1995) and the New Orleans Jazz (Basketball, moved to Salt Lake City in 1979). It capped a remarkable end to the season that had an air of destiny.

The day itself was one of celebration. Thousands of fans made the short journey up from south west to north west London to compliment the 30,000-plus strong contingent from the West Country supporting Plymouth. The attendance was listed as 57,956, the second largest in League Two play-off history behind only the 61,589 who watched Bristol Rovers’ 3-1 victory over Shrewsbury Town in 2007. An electric atmosphere and a tense game ensued, and it was to be a Hollywood ending. Delirium swept across the 25,000 AFC Wimbledon fans as late goals from Taylor and Akinfenwa saw them reach League One, where they will play MK Dons in the league for the first time after they were relegated from the Championship.

Grown men were reduced to tears, manager Neil Ardley (himself a former Wimbledon player) looking quietly overwhelmed as he soaked in the moment after Akinfenwa’s penalty, and Samuelson and Heller, smiling proudly from the directors’ box, hugging each player as they went up to collect their medals and the trophy.

This is what it meant to a club that had been through so much – the unity and spirit that triumphed against all odds. “Not in the wider interests of football”? The perfect riposte to that echoed around Wembley from the Dons fans at full-time “You franchise bastards, we’re coming for you.” And next season, they really will be.