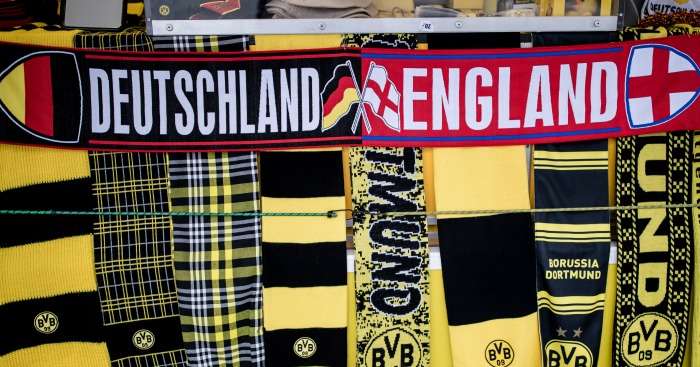 The Football Association is to clamp down on obscene chanting following the behaviour of some England fans in Germany.

Daniel Storey took issue with their behaviour and Press Association Sport understands the FA and police are to review video footage in a bid to identify, and potentially ban, those involved.

FA chairman Greg Clarke said: “The behaviour of a section of the England support in Dortmund (on Wednesday) night was inappropriate, disrespectful and disappointing.

“The FA has consistently urged supporters to show respect and not to chant songs that could be regarded as insulting to others.

“Individuals who engage in such behaviour do not represent the overwhelming majority of England fans nor the values and identity we should aspire to as a football nation.

“We are working with the England Supporters Travel Club and speaking with the Football Supporters’ Federation to come together to address this issue.

“Everyone involved in the game has a responsibility to ensure that attending a football match is a safe and enjoyable experience for all.”

The match, which was settled by Lukas Podolski’s second-half goal, went ahead just hours after the Westminster terror attack.

And although it was a promising night for a young Three Lions side on the field, off it the actions of some fans left a black mark against England’s name – a subject manager Gareth Southgate was quizzed about afterwards.

“We have incredible support in terms of numbers and vocal support wherever we travel around the world,” he said.

“But it is always important that they remember they are representing the country and we’d want them to do that in the right way.”

Southgate said he “can’t speak or answer for individuals I don’t know” when pressed on the matter, but hopes his team can offer an example to follow.

“I think our responsibility is to set an example in what we do and say and you hope others will follow that,” he said. “We are not in control of that.”

A Football Supporters’ Federation spokesperson said: “Over the last 20 years English football fans have built a worldwide reputation for our passionate support and the vocal backing we give to our teams.

“Unfortunately, little of the wit and imagination that goes into our club football songs is reflected at England games.

“England’s travelling support is made of people of all ages from a range of clubs, many of whom have worked hard in recent years to improve our standing abroad and have expressed concern to us about these chants.

“We don’t want to regress to a situation where that reputation is tarnished by the actions of a minority.”