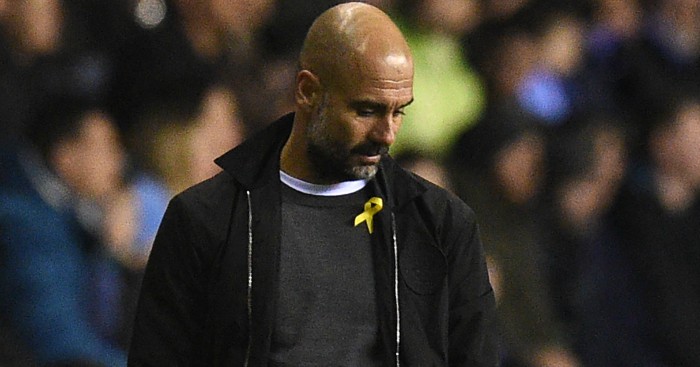 The Manchester City manager has until 6pm on Monday to respond to an FA charge relating to the ribbon, which he wears in support of two political leaders who were imprisoned following Catalonia’s independence referendum in October.

That was declared illegal by Spain and Guardiola, one of Catalonia’s favourite and most famous sons, has worn the ribbon since and says it is for “humanity”.

But quoted in several national newspapers, Glenn says comparisons cannot be made with sides choosing to display a poppy on their shirt to commemorate Armistice Day. The FA has charged Guardiola with “wearing a political message”.

“We have rewritten Law 4 of the game so that things like a poppy are OK but things that are going to be highly divisive are not,” Glenn said.

“That could be strong religious symbols, it could be the Star of David, it could the hammer and sickle, it could be a swastika, anything like Robert Mugabe on your shirt – these are the things we don’t want.

“To be honest, and to be very clear, Pep Guardiola’s yellow ribbon is a political symbol, it’s a symbol of Catalan independence and I can tell you there are many more Spaniards, non-Catalans, who are p****d off by it. All we are doing is even-handedly applying the laws of the game.

“Poppies are not political symbols; that yellow ribbon is. Where do you draw the line, should we have someone with a Ukip badge? Someone with an Isis badge? That’s why you have to be pretty tough that local, regional, national party organisations cannot use football shirts to represent them.”