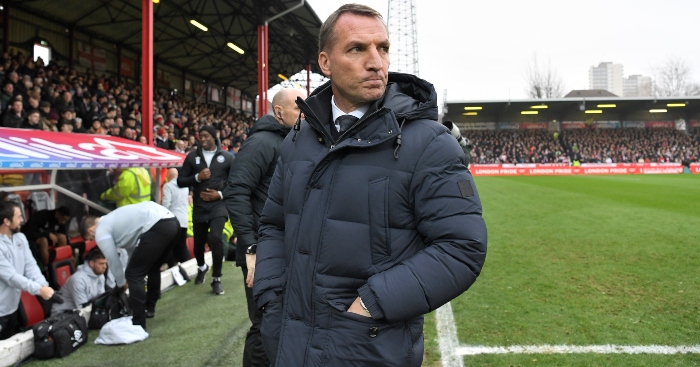 Brendan Rodgers has never enjoyed a giant-killing. “I was always one that when I watched the games and a big team was playing a lower team, I always wanted the big team to win,” he said this week. “Why? Because if the lesser team could turn it on like the big players every week, they’d be at that level.

Joyless though it may be, Rodgers pragmatic approach to the cups goes some way to explaining his remarkable record in domestic competitions. Leicester’s FA Cup fourth-round victory marked Rodgers’ 31st consecutive unbeaten cup match, a run which includes almost three years in Scotland where Celtic as the biggest giant in the land were never once cut down to size on his watch.

Less than a year into his Leicester reign, it is clearly evident that Rodgers’ dead-eyed approach to cup football has been transmitted to his players. The Foxes made nine changes for the final cup tie ever at Griffin Park but any fears of a lack of sharpness in mind or body were quickly dispelled by a lightning fast start from the visitors.

Leicester went close to making Brentford restart within 20 seconds of the first kick-off after Kelechi Iheanacho set up Ayoze Perez but Luka Racic recovered to deny the Foxes an atmosphere-bursting opener. It was typical of the start both sides made and Brentford could only hold out for another three minutes.

Again, Leicester’s opener highlighted the gulf in quality and intensity during the early exchanges. James Justin claimed the assist with a perfectly weighted centre but it was made by Dennis Praet, who picked out his right-back with a sublime split pass. Where many midfielders would have floated the ball over the head of Bees defender Dominic Thompson, forcing Justin to take a touch before serving Iheanacho, Praet penetrated with a low pass which skimmed across the turf and begged to be crossed first time. Iheanacho timed his run accordingly and applied the finishing touch.

Brentford too made nine changes but Thomas Frank’s charges seemed to be dazzled in a spotlight that rarely shines on the fringes of the Danish manager’s squad. Their early passing in the face of Leicester’s typical pressing was sloppy while Jan Zamburek and Julian Jeanvier were both caught out dawdling on the ball allowing the Foxes to pounce.

When the Bees eventually gathered their composure, they were fortunate to be facing only a one-goal deficit. That was probably Rodgers’ main gripe at half-time – the game could have been killed off by the break.

Indeed, Brentford went closest to the game’s second goal when Christian Fuchs had to clear from Leicester’s goalmouth after their post had been struck by Emiliano Macondes’ teasing cross.

Fuchs, Wes Morgan and Marc Albrighton – all Premier League title winners – were a valuable presence in Rodgers’ second string, raising the average age of the outfield ten to 26. Prior to Rodgers’ arrival, Leicester had struggled to move beyond the 2016 title triumph, especially in finding a balance with the haste of the transition. This summer may see Fuchs and Morgan finally exit the King Power. Rodgers will have to consider the void of experience and character in the event of their departure.

Captain Morgan and Fuchs helped Leicester show a different type of intensity in the second half when Brentford belatedly seized some initiative. But the Foxes were rarely ruffled, with Racic’s volley from a corner being Danny Ward’s only test.

Despite so many changes, Leicester balanced an aura of superiority with the mentality required to avoid the type of giant-killing Rodgers so reviles. If the manager makes it 32 on Tuesday, he will take the Foxes to Wembley for their first cup final in two decades. Don’t be surprised to see them back there for another in May.