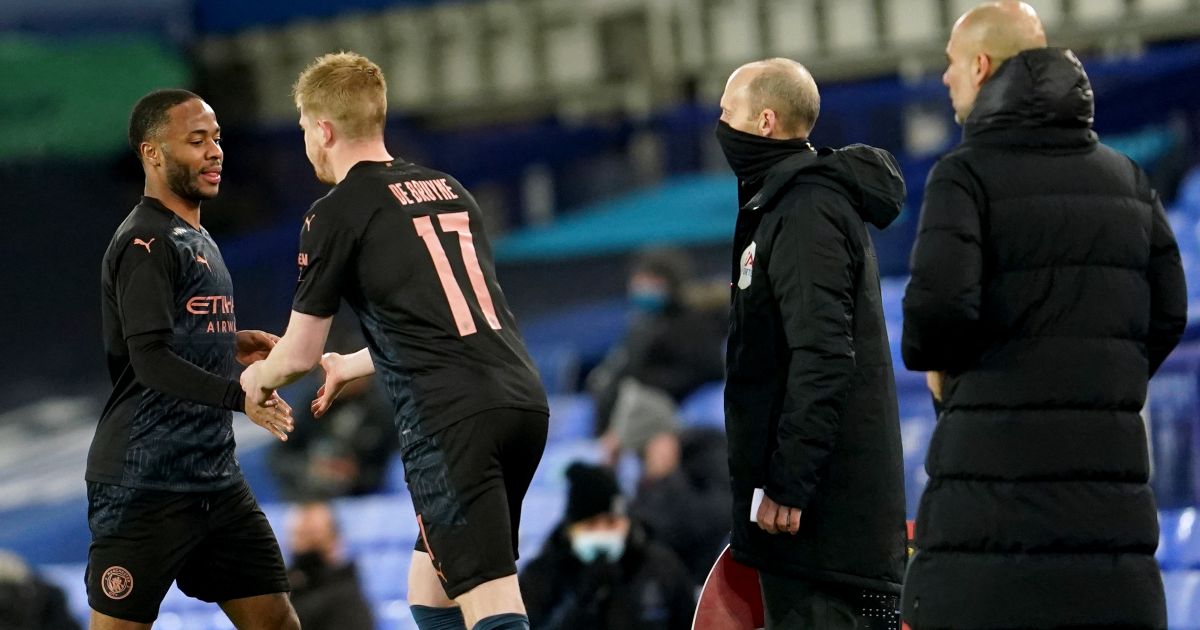 Just the six changes made by Pep Guardiola as Manchester City switched targets for the third time this week. But while coming through ‘one of their toughest games in the last year’, according to Guardiola, the question over his best XI is becoming clearer as the Quadruple inches closer.

Guardiola certainly needs no more to occupy his overactive mind and mercifully for the manager, at Goodison Park, his players cemented what he was already thinking.

City toiled against Everton, who offered stubborn resistance and little ambition, but Carlo Ancelotti’s plan to keep the game on a knife edge worked for 84 minutes. Guardiola’s side remained patient but lacked the incision to cut through the Toffees’ back five, highlighted by just the single shot on target, against a rookie goalkeeper, reaped from 77 per cent of the first-half possession.

The visitors fared little better in the second period, with Joao Virginia in the Everton goal being bothered only by Raheem Sterling’s scuffed shot. That effort summed up Sterling’s night, and his form overall as City’s season approaches business time.

When this quarter-final tie reached its pivotal climax, Sterling found himself on the wrong end of Guardiola’s hook. Having spent 80 minutes searching in vain for his rhythm and a route beyond Seamus Coleman, Mason Holgate and Yerry Mina, the England attacker was made to sit and watch while Kevin De Bruyne was dispatched from the bench to get the job done. Which, of course, the Belgian star did by playing a major role in Ilkay Gundogan’s opener before adding the second himself as Everton belatedly came out to play.

For his own sake, Sterling’s reaction to his replacement’s game-winning influence needed to have been better than his reported response to his reduced role in recent weeks.

In the wake of City surrendering their winning run in the Manchester derby, Sterling was left on the bench for the following game against Southampton. The attacker is said to have communicated his annoyance to Guardiola, which was perhaps the biggest mistake in a series of wrong moves of late. Pep’s response: he dropped Sterling altogether for last Saturday’s trip to Fulham.

Sterling was offered 21 minutes in midweek with Champions League progression beyond Borussia Monchengladbach long since assured but at Everton, as part of half-a-dozen changes, Guardiola gave an opportunity to the 26-year-old, who wore the captain’s armband on his last visit to Goodison last month. After this trip to Merseyside, rather than lead out the XI, Sterling no longer features in the best version of it.

Rather than make his point, Sterling proved the manager’s recent stance correct. He offered not a single key pass and was dispossessed more often than any other City player. Even more damning was the immediate improvement when Phil Foden moved to the left after Sterling had made his reluctant exit.

Upon De Bruyne’s entrance, Pep was playing with what, right now, would constitute his best attack. Riyad Mahrez is in arguably his best form as a City player; the same can be said for Foden, whether he plays from either flank or in a deeper central role. Gabriel Jesus is Guardiola’s starting centre-forward, if he starts one. If not, De Bruyne plays as a false nine.

All of which leaves Sterling on the bench, sat next to Sergio Aguero. Sterling’s frustration preceded Aguero’s moan as he left the pitch in midweek regarding his team-mates’ perceived refusal to give him the ball.

Guardiola was speaking generally but his words on Tuesday carried a warning for Sterling and Aguero: “When everybody is generous and everybody is in a good mood, thinking about the team, about the club, they are more than welcome and they will have their minutes.”

Aguero’s short-term future appears set to be away from the City XI, and long-term away from the Etihad altogether. Sterling, though, can still play a major role as City chase history. But his form and, seemingly, his mindset requires some swift revision.