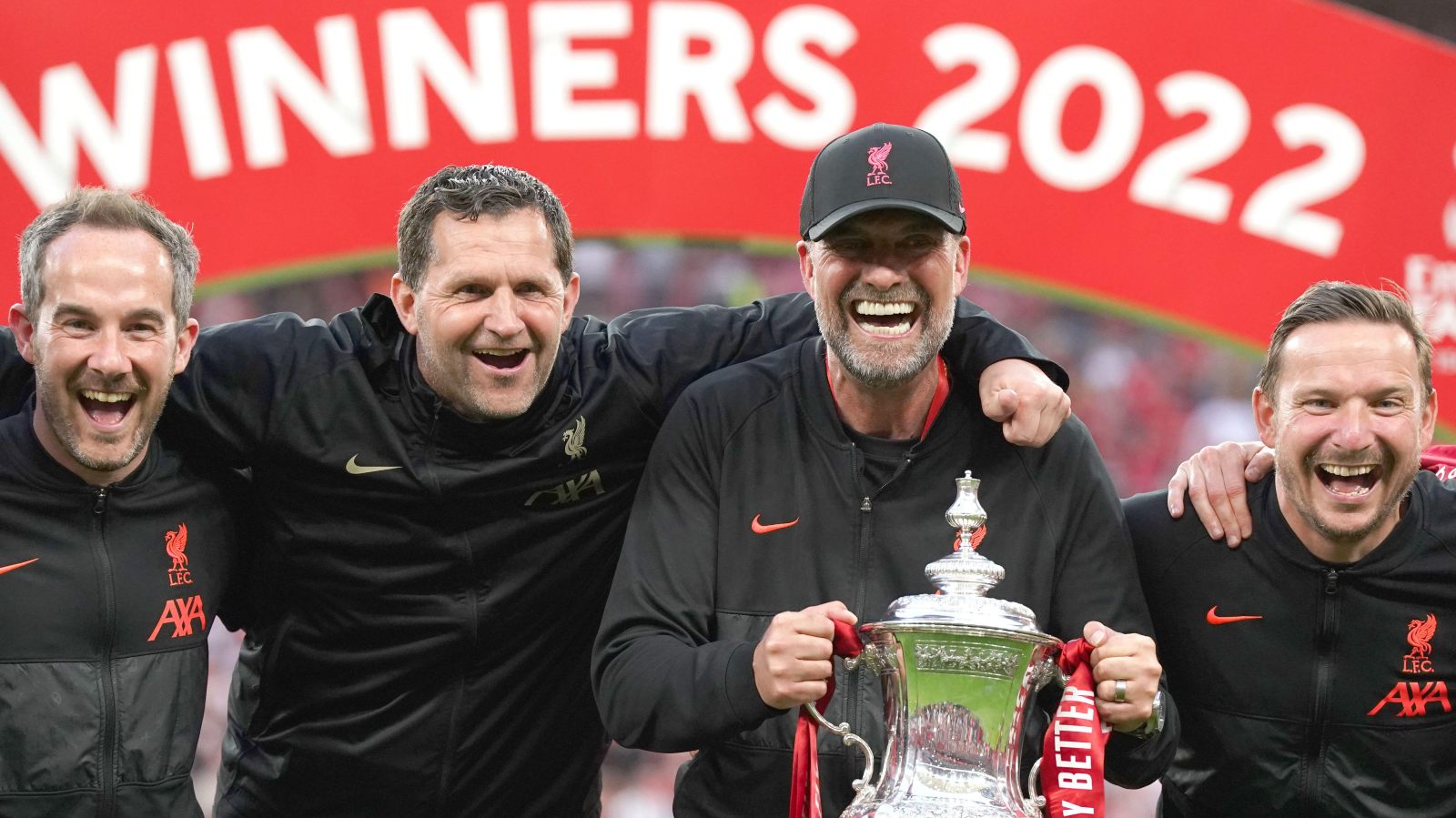 Jurgen Klopp admitted there were two sets of ‘mentality monsters’ at Wembley as Liverpool edged the ‘small margins’ to win the FA Cup.

Alisson Becker was the spot-kick hero as the Reds secured another penalty shoot-out triumph against Chelsea to keep their quest for an unprecedented quadruple alive.

Just 76 days after the Reds edged past Thomas Tuchel’s men on penalties following a scoreless Carabao Cup final, Wembley witnessed another gripping clash between these sides that went down to the wire.

Nothing could split them after 90 minutes and extra time again, with Alisson coming up trumps in the shoot-out as Liverpool won their first FA Cup since 2006.

Edouard Mendy prevented Sadio Mane striking the winner after Cesar Azpilicueta had hit the post, only for the Brazil goalkeeper to deny Mason Mount before Kostas Tsimikas struck to seal a 6-5 win.

Klopp, who becomes the first German manager to win the FA Cup, told BBC Two: “It was outstanding, another incredibly tense game against Chelsea, and they would have deserved it exactly the same way.

“The small margins are again the difference and I cannot be more proud of my boys, the shift they put in.

“In the penalty shoot-out, it was nerve wracking and my nails are gone.

“But I really feel for Chelsea, it is the second time that after 120 minutes, you get nothing. That is too hard, but for us I am pretty happy.

“We also saw mentality monsters in blue as well, it was one penalty. That’s it, Chelsea played outstanding, but in the end, there must be one winner and it was us today.”

Liverpool captain Jordan Henderson said on BBC Two: “We have worked so hard all season, so to come here and get over the line means a lot to everyone – the players, the fans deserve it, the whole club, so it is a big moment for us.

“We have not been in this final for a long time, so to come here and win it is pretty special.

“It was difficult, we knew it would be, we have had so many games in a short space of time, but that is what we are all about, the mentality to dig in and work for each other when it is tough.

“To win it on penalties again is incredible, so all credit to the boys.”

Henderson knows there is not much time to revel in their Wembley success.

“We have got to recover quickly, we have got another (Premier League) game on Tuesday (against Southampton),” he said.

“We have got to be ready for that and then Wolves at the weekend to finish the Premier League season off, then the Champions League final after that.

“We have got three big games left and hopefully we can win all three to finish the season on a high.”

The 2021/22 #EmiratesFACup champions have been crowned! 👑

After a cagey affair, it took penalties to separate the two sides, as @LFC defeated a resilient @ChelseaFC 5-6 on penalties to win their 8️⃣th FA Cup title! 🏆 pic.twitter.com/hTZoV0MO2E

Tsimikas, who slotted in the winning spot-kick, said: “It is very, very special for me.

“The boss asked me which number (penalty) I want, and I said number seven. He asked ‘why so far?’. I said ‘I just want number seven’ and it gave me the opportunity to win the game. I chose the right side and scored.

“We have to celebrate hard, tomorrow is another day and we still have a lot to do. We have to be 100 per cent focused if we want to achieve goals.

“We will go for it and hopefully at the end, everybody will be happy.”