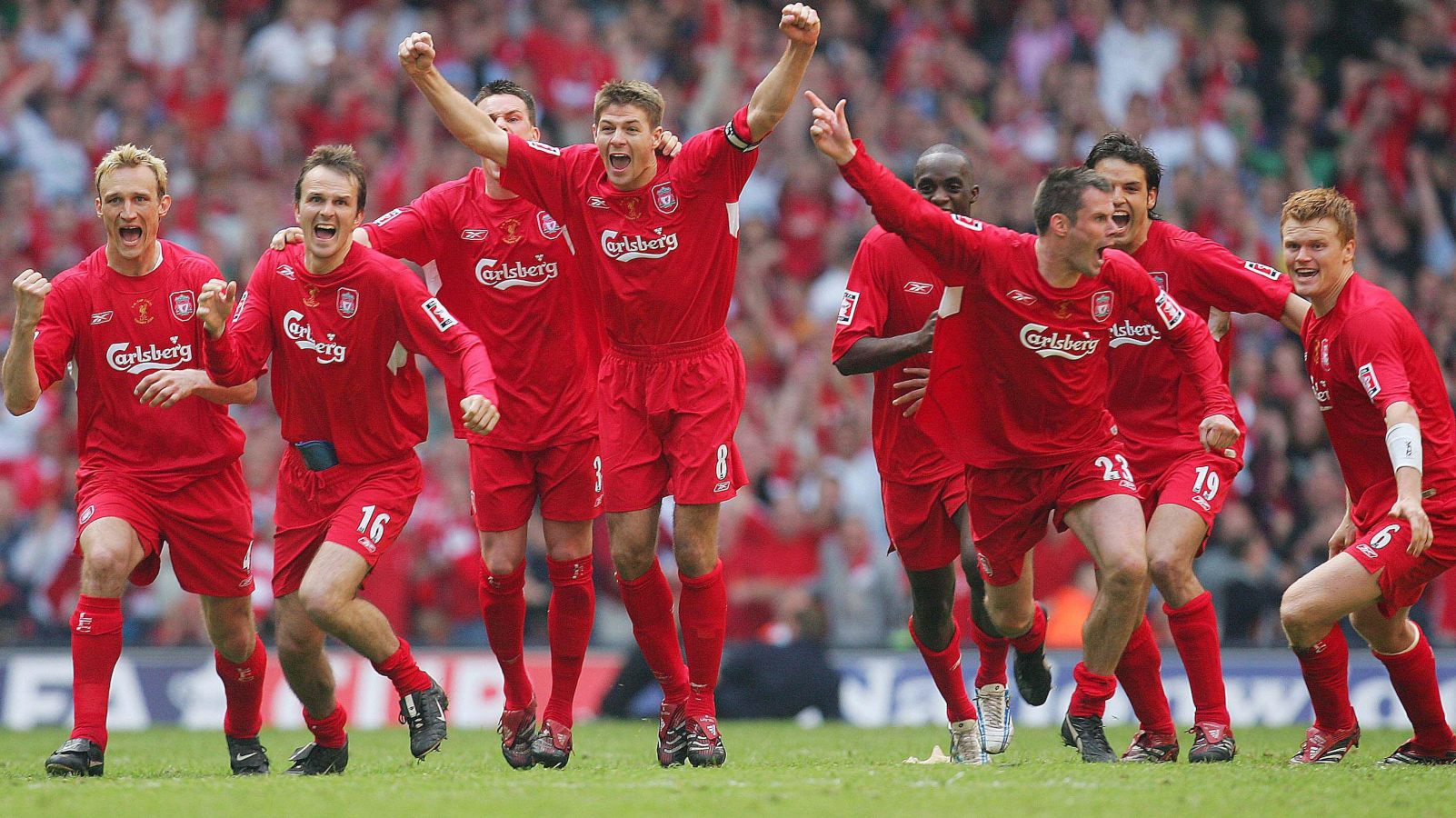 Ahead of Liverpool’s date with Chelsea at Wembley, we decided to rank the 21st century finals for entertainment. The last time Liverpool won it remains the most thrilling.

22) 2000: Chelsea 1-0 Aston Villa
The last Wembley showpiece before the old place was knocked down was a snooze-fest, memorable only for David James fumbling again in an FA Cup final.

It allowed Roberto Di Matteo to score a 72nd-minute winner, in the process securing Chelsea a UEFA Cup place while making Gianluca Vialli the most successful manager in their history. It was an easier field in which to stand out back then.

21) 2003: Arsenal 1-0 Southampton
When the FA Cup final first moved to Cardiff, it was intended that this would be the last before returning to Wembley. It took four more seasons.

Anyway, the match itself was entirely forgettable, evidenced by the fact I had to Google the scorer of the only goal. Robert Pires in the 38th minute, apparently. Arsenal retained the cup; nothing else happened.

20) 2007: Chelsea 1-0 Manchester United
The first showpiece back at Wembley was only the first turgid final between United and Chelsea to feature Jose Mourinho on one of the benches. This time he was victorious, with Didier Drogba’s goal four minutes from time denying viewers at home the penalties they deserved after a dire spectacle.

Drogba deprived United of the Double, securing Chelsea an accompaniment to their League Cup in the process.

19) 2018: Chelsea 1-0 Manchester United
Mourinho sat on the opposite bench but the outcome was the same: Chelsea won 1-0 in a final remembered for the score and nothing else. Perhaps aside from Eden Hazard befuddling Phil Jones to earn and score the decisive first-half penalty.

18) 2008: Portsmouth 1-0 Cardiff City
The only final this century not to feature a big six side was interesting for that fact alone. Nwankwko Kanu settled a dull affair, seizing on Peter Enckelman’s first-half fumble. It secured for Pompey their first cup triumph since 1939 and Harry Redknapp his first and only major trophy as a manager.

Happy birthday to the only English manager to win the FA Cup since the turn of the millennium:

17) 2019: Manchester City 6-0 Watford
City claimed the domestic Treble with an absolute gubbing of Watford. The Hornets had a great chance early on to put City on the back foot when Roberto Pereyra wasted a glorious opportunity. That served to rouse City, who proceeded to dismantle Watford with a devastating performance that put them 5-0 up with a quarter of the game still to play.

Even at 6-0, City were desperately searching for the goal that would have made them the first team to win an FA Cup final by seven goals. Thrilling for them, less so for the neutral.

16) 2011: Manchester City 1-0 Stoke
City ended a long, torturous wait for a major trophy with a 1-0 victory over Tony Pulis’s Potters playing in their first ever FA Cup final.

Yaya Toure’s goal was reward for City’s dominance which began the silverware surfeit that has now lasted a decade. Crucially for City fans then, it prompted the removal of the Old Trafford clock, which kept track of their 35-year trophy drought.

15) 2004: Manchester United 3-0 Millwall
United avoided finishing the season empty-handed by cruising past Championship opposition in the Cardiff final. Dennis Wise’s Millwall couldn’t get close enough to kick Cristiano Ronaldo, who opened the scoring just before the break. Ruud van Nistelrooy scored twice in the second half to give Sir Alex Ferguson his last of five FA Cup wins.

14) 2012: Chelsea 2-1 Liverpool
Chelsea warmed up for the Champions League final a fortnight later by getting the better of Kenny Dalglish’s Reds.

Bobby Di Matteo’s side were dominant for the first hour, thoroughly deserving of a two-goal lead given to them by Ramires and Drogba. Andy Carroll’s introduction breathed life into Liverpool, with the £35million striker pulling one back before drawing from Petr Cech one of the great FA Cup final saves.

Petr Cech's incredible save in 2012 FA Cup final. One of his best ever? pic.twitter.com/cqmZZpmAo4

13) 2015: Arsenal 4-0 Aston Villa
Poor Tim Sherwood. This was supposed to be the former Tottenham manager’s big day, especially after Villa’s superb run to the final. But Arsene Wenger’s Gunners played his boys off the Wembley park.

The only surprise when Theo Walcott gave Arsenal the lead just before the break was that it took so long. Alexis Sanchez scored a stunning second just after half-time, leaving Per Mertesacker and Olivier Giroud to rub salt in Sherwood’s wounds.

Christian Pulisic gave Chelsea an early lead but two summers ago, Pierre-Emerick Aubameyang was still playing for a new contract. Auba earned and scored the penalty which drew Arsenal level before netting an exquisite second to earn Arsenal a place in Europe.

11) 2005: Arsenal 0-0 Manchester United (Arsenal won on pens)
United dominated Arsenal in Cardiff but could not find the breakthrough in an enthralling stalemate. The first final to be settled on penalties went Arsenal’s way when Paul Scholes’ effort was saved by Jens Lehmann.

10) 2002: Arsenal 2-0 Chelsea
It took an hour to really get going but the all-London affair in Cardiff eventually sprang to life and was settled by two moments of real quality.

Chelsea could hardly be blamed for tracking the runs of Sylvain Wiltord and Freddie Ljungberg more closely than Ray Parlour but when the Blues backed off, the Arsenal midfielder unleashed a stunning curler over Carlo Cudicini.

The Gunners made the game safe 10 minutes from time when Ljungberg ran from his own half through the Chelsea defence, flooring John Terry in the process, before bending another Bergkamp-esque effort around Cudicini.

9) 2010: Chelsea 1-0 Portsmouth
Pompey were back at Wembley two years after beating Cardiff but against champions Chelsea they were very much the underdogs, having been relegated amid a financial meltdown at Fratton Park.

Avram Grant’s side rode their luck with Chelsea hitting the woodwork five times in the first half. But they exhausted their supply of good fortune by the time Kevin-Prince Boateng stepped up to take a penalty, one he fired meekly at Petr Cech.

Didier Drogba’s free-kick a few minutes later floored Pompey and though Lampard missed a penalty in the closing minutes, Chelsea secured their first ever domestic Double.

8) 2016: Manchester United 2-1 Crystal Palace
United won their 12th final but still portrayed themselves as the bad guys when it was leaked immediately after the win – secured by Jesse Lingard’s splendid extra-time volley – that Louis van Gaal was to be sacked and replaced by Mourinho.

The game itself was entertaining enough, especially when Palace took the the lead with 12 minutes to go, prompting That Dance. But Juan Mata equalised before United, down to 10 men after Chris Smalling’s red card, eventually triumphed courtesy of Lingard.

It would not have been the decisive strike had the officials spotted that Florent Malouda’s 30-yard ripsnorter had crossed the line after bouncing down off the crossbar. Regardless, Chelsea saw the game out, prompting Hiddink to light up a Cuban inside Wembley, for which he received a fine.

It was a gripping showpiece. Sanchez’s fourth-minute opener may have been ruled out for 427 reasons in the VAR era, but Diego Costa levelled for Chelsea, who played the last quarter with 10 men after Victor Moses’ dismissal.

5) 2014: Arsenal 3-2 Hull City
Arsenal gave Hull a two-goal headstart, with James Chester and Curtis Davies putting the Tigers two up inside eight minutes. But Arsenal eventually got going, with Santi Cazorla’s free-kick halving the deficit before Laurent Koscielny scrambled in an equaliser.

The Gunners were stronger in extra-time and Ramsey eventually earned Wenger his fifth FA Cup winner’s medal after a 3,283-day wait for silverware.

4) 2021: Chelsea 0-1 Leicester
There was a lot to like about last year’s final, which stood out as an occasion for the presence of fans. Around 20,000 watched the Foxes lift the FA Cup for the first time ever as part of the largest post-lockdown attendance at a game. The stadium was three-quarters empty but sounded like La Bombonera compared to the year of eeriness that Covid inflicted upon us.

It was a fitting backdrop to a close-but-enthralling affair, settled by one of the great cup final goals from Youri Tielemans. Chelsea pushed Leicester but Kasper Schmeichel made two incredible late stops and VAR spared Wes Morgan an injury-time own-goal to see the FA Cup lifted by a side outside the Big Six for the first time in eight years.

3) 2013: Wigan Athletic 1-0 Manchester City
Not many true underdogs have made it to Wembley or Cardiff in the last couple of decades and Wigan are the only one to pull one of the big boys’ pants down on the big stage.

Ben Watson bagging the winner in the 91st minute certainly added to the fairy-tale but it was no less than Wigan deserved. Sadly, nor was relegation, which was confirmed three days later. In the meantime, City sacked Mancini, with news breaking on cup final day that they were in talks with Manuel Pellegrini. They had also been one of the worst Premier League runners-up that season.

2) 2001: Liverpool 2-1 Arsenal
The 119th final, the first to be staged outside of England, gave the platform to Michael Owen to carry out a smash-and-grab on Arsenal.

The Gunners dominated for long spells at the Millennium Stadium and the first sign that it was not to be their day came when Stephane Henchoz got away with handling Thierry Henry’s shot on the Liverpool line.

Ljungberg eventually gave Arsenal a deserved lead with 20 minutes remaining but Owen struck twice in the last eight minutes. His second was a beauty. Who’d have thought 21 years later he’d be hawking NFT sh*te and the kind of garb yer Da wouldn’t be seen dead in.

1) 2006: Steven Gerrard 3-3 West Ham United (Gerrard won on pens)
The last showpiece in Cardiff turned out to be the Gerrard Final, with the Liverpool captain’s two goals reining in the Hammers. His second, a 35-yard thunderb*stard in added time, remains one of the greatest cup final goals of all time.

We were all Lord of the Manor of Frodsham here…

#OnThisDay in 2006, Steven Gerrard — who'd spent most of injury time hobbling around with cramp — thumped in a last minute equaliser against West Ham in the FA Cup Final. pic.twitter.com/9V3p4S11eZ

It was cruel on West Ham, for whom a victory would have been just reward. But they never recovered from Gerrard’s wonderstrike in time for the shoot-out, with three out of four Hammers seeing their penalties saved by Pepe Reina.