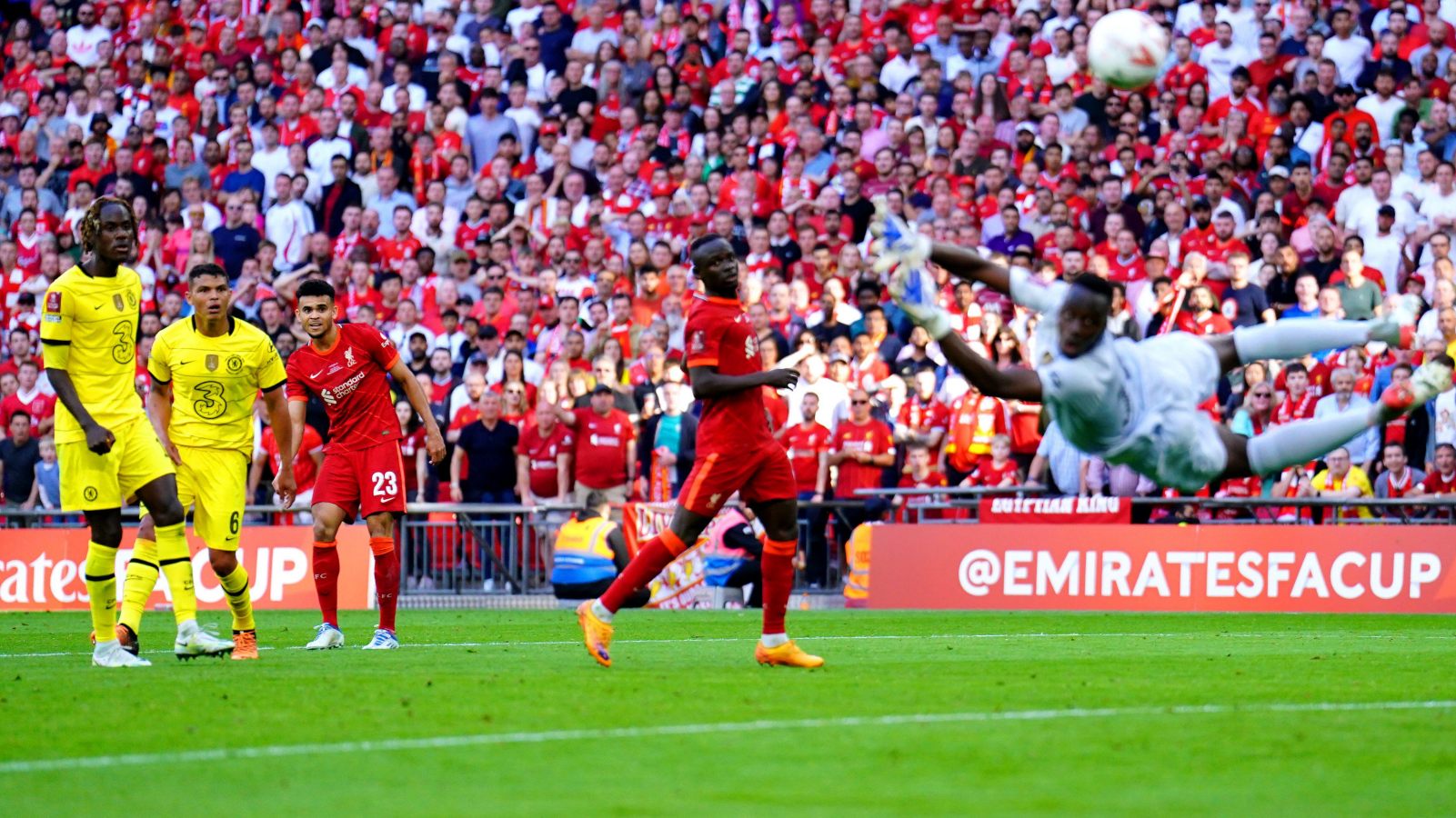 Luis Diaz lit up Wembley with a performance that had everything but the goal. Thomas Tuchel may regret his Romelu Lukaku call.

Here’s how the individuals performed in the FA Cup final…

Edouard Mendy
Made one decent stop in the opening stages from Diaz when Chelsea were buckling under early pressure. Might have been the hero after keeping out Mane’s spot-kick, but may be disappointed not to have kept out at least one of two other penalties when he got gloves on the ball.

Trevoh Chalobah
Endured a torrid opening to his third final appearance of the season but the Chelsea defender recovered his composure, aided by support from James, and looked more assured before he was replaced at half-time in extra-time.

Thiago Silva
Rarely ruffled once Chelsea found a way to stop Liverpool feeding Mane in the pocket between Chelsea’s defence and midfield. The 37-year-old might have been in trouble when he was squared up by Diaz late on, but Thiago glided across and snuffed out the danger.

Reece James
The right wing-back had to rein in his attacking instincts somewhat to give Chalobah a hand with Diaz. Booked for a late challenge on Thiago after stopping a dangerous Liverpool counter-attack.

Marcos Alonso
While James was tied to Chalobah, Alonso took every opportunity to bomb on and the left-wing-back ought to have scored with one of two chances before his free-kick from wide hit the bar.

Jorginho
Lost Mane over his shoulder too often in the opening stages but the Italy international got to grips with Liverpool’s engine room and helped Chelsea edge the midfield battle.

Jorginho's first-half by numbers vs. Liverpool:

Brilliant in the opening period. 👏 pic.twitter.com/YB8HG0dxvw

Mateo Kovacic
Gave all he could for 65 minutes having been passed fit when he wasn’t expected to be. Attached himself to Thiago and stopped the Spaniard from pulling Liverpool’s strings.

Mason Mount
Poor Mason. The Chelsea academy graduate has played in six Wembley finals and lost them all. After lurking on the fringes of the game for 120 minutes, Mount took a poor penalty which Alisson kept out with ease.

Romelu Lukaku
Selected to lead the line after a mini revival in form of late, but Lukaku was too easily shackled by Liverpool’s centre-backs. Perhaps understandably against  Van Dijk, the centre-forward too often appeared reluctant to run in behind, but if he’s not stretching defenders, he’s not doing much else. The one occasion he darted behind Van Dijk just before half-time, he created an opening. Which he duly tw*tted over.

Christian Pulisic
Another nearly performance from the American selected ahead of Timo Werner. Had the bulk of Chelsea’s best chances but three very good opportunities went begging – two were pulled wide and another hit Alisson’s mitts – before he was replaced during extra-time.

N’Golo Kante (for Kovacic, 65)
Kante-esque. The one Chelsea player who wasn’t ruffled by Diaz, with the midfielder brushing aside the man of the match when one-on-one in extra time.

Hakim Ziyech (for Lukaku, 85)
Might have earned a penalty when he was barged over by Konate but the officials weren’t interested.

Cesar Azpilicueta (for Chalobah, 105)
Left out of the XI then missed in the shoot-out. Had better days.

Ruben Loftus-Cheek (for Pulisic, 105)
Subbed on at half-time in extra-time; hooked a minute from the end after playing up front. Odd.

Ross Barkley (for Loftus-Cheek, 119)
Hadn’t kicked a ball for Chelsea since the third round in January prior to coming on for the shoot-out but he took a tidy penalty. Didn’t matter.

Alisson
Flawless in 120 minutes, which included a fine save to deny Alonso when one-on-one, then kept out Mount’s poor penalty to make himself the hero.

Trent Alexander-Arnold
Typical Trent. Created some of Liverpool’s best openings, most impressively with an outside-of-the-foot pass that put Diaz through on goal early on. But the right-back persistently left space behind him, which Pulisic and Alonso should have exploited. It’s a price Klopp seems prepared to pay to get Alexander-Arnold into advanced positions. Was switched on, though, to deny Pulisic twice in the second-half with last-gasp challenges.

Ibrahima Konate
Got the nod ahead of Matip and the centre-back and justified his inclusion with a solid performance, though he risked ruining it all with a needless nudge on Ziyech in extra-time which the officials took a lenient view of.

Virgil van Dijk
Took the majority of the responsibility for dealing with Lukaku, who escaped Van Dijk’s attention just once in the first half. Subbed for the first time this term at the start of extra-time to spark fears for the rest of his season.

Andrew Robertson
James’ lack of adventure spared Robertson a heavy defensive shift. Going the other way, his cross teed up Jota for a sitter but his own touch was lacking when Alexander-Arnold found him at the far post early in the second half. It was a similar story when Milner gave him an open goal but Robertson shinned against the post from point-blank range.

Naby Keita
Another performance to split opinions from Keita. Received plenty of praise when he was the first Liverpool tactical change but for what, we’re not entirely sure. As industrious as ever but struggled to link Liverpool together. Had one great opportunity to open the scoring after Mendy had denied Diaz but his shot was pulled wide.

Jordan Henderson
A deeper role for the captain in Fabinho’s absence and it seemed to take Henderson a while to acclimatise to a position that isn’t his favourite. But he grew into the game and plugged some of the gaps Chelsea found in Liverpool’s midfield.

Thiago Alcantara
Narrowly failed to reach Diaz’s pass for a tap-in early on and was fortunate to swerve a booking not long after for sliding in on Kovacic, who denied the Spaniard the space to dictate Liverpool’s play. Took an exquisite penalty.

Luis Diaz
Everything but the goal. Tore Chalobah a new one in the early stages and should have scored when Alexander-Arnold put him one-on-one with Mendy on eight minutes. That was his only shot on target in six attempts, most of which crept past the post, but Diaz was by far and away Liverpool’s biggest threat.

Sadio Mane
Took up great positions on Jorginho and Kovacic’s shoulders in the early stages when Thiago was reluctant to be drawn out but created little thereafter. The most relieved Red after his penalty, which could have won the cup, was saved.

Mo Salah
Very quiet before something twanged on the half hour. Payer circles for Salah’s groin began forming on Merseyside immediately with the Champions League final a fortnight away.

Diogo Jota (for Salah, 32)
Took Salah’s spot on the right and should have scored just before the break when his touch was too heavy to flick Robertson’s cross past Mendy. Another low effort was driven wide of the far post on the hour.

James Milner (for Keita, 73)
Provided a wonderful cross which Robertson should have converted instead of hitting the post.

Joel Matip (for Van Dijk, 90)
Omitted from Klopp’s XI but came on at the start of extra-time and had a serene half-hour.

Roberto Firmino (for Diaz, 98)
Ten touches in 22 minutes, five of which were wayward passes. Scored from the spot in the shoot-out.

Kostas Tsimikas (for Robertson, 110)
Scored the wining penalty and that’s all that matters.