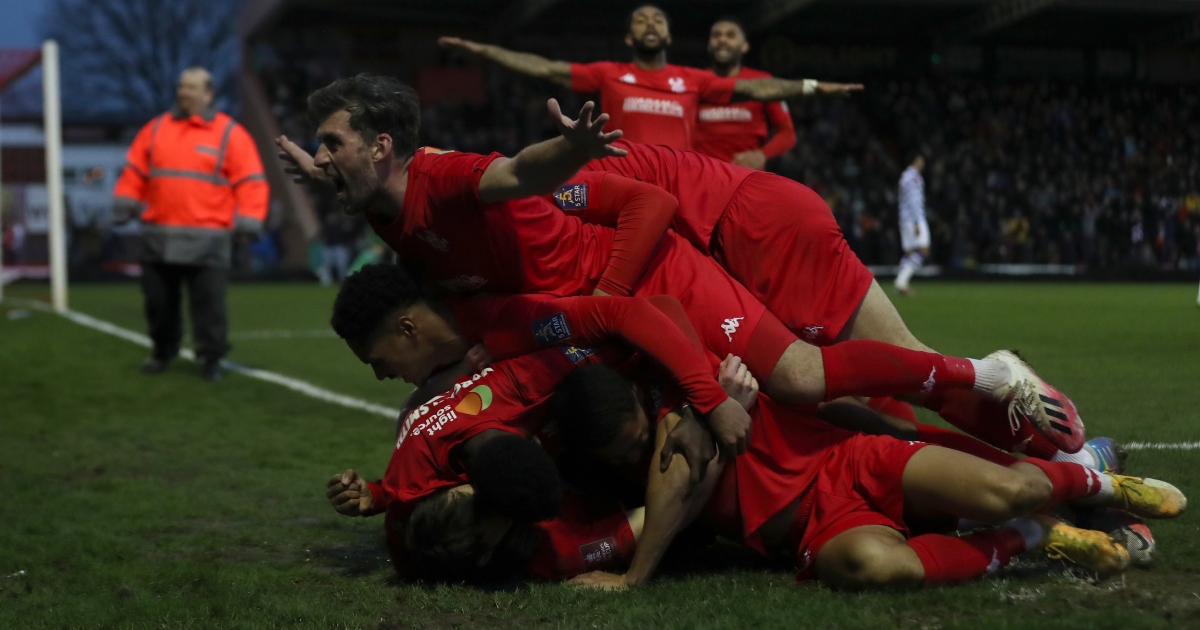 Vanarama National League outfit Boreham Wood will be in the FA Cup fourth-round draw after a 2-0 home win over AFC Wimbledon.

Tyrone Marsh gave the Wood an early lead with a fierce drive and substitute Adrian Clifton, who had only just come on, sealed a memorable win with four minutes left.

National League North Kidderminster came from behind to beat Championship side Reading 2-1 at Aggborough Stadium.

George Puscas had given the Royals the lead just before half-time, but captain Sam Austin (69) had the non-league side level before Amari Morgan-Smith (82) bundled in a late winner.

Teenager Joe Grey came off the bench to score the winner as League Two Hartlepool fought back to beat Championship side Blackpool 2-1 at Victoria Park.

Keshi Anderson (eight) put the visitors ahead early on, but Hartlepool were level soon after the restart through a deflected effort from David Ferguson before Grey’s low finish on the hour mark secured a memorable win.

Saturday’s early kick off saw Championship side Middlesbrough edge past League Two Mansfield 3-2 with an own goal in stoppage time.

Uche Ikpeazu (four) and Caolan Boyd-Munce (14) had looked to put Boro in control, but the visitors were reduced to 10 men in the 33rd minute following a red card for defender Sol Bamba.

Oli Hawkins (67) and Rhys Oates (85) hauled the Stags level – only for Boro to snatch a dramatic late winner when John-Joe O’Toole turned the ball into his own net.

Wigan saw off Championship promotion-chasers Blackburn 3-2 with a stoppage-time winner from Thelo Aasgaard just after Daniel Ayala’s header looked to have sent the tie to extra-time.

An all-action match, which saw Barrow forward Tom Beadling sent off just before half-time, looked to have been settled by Carlton Morris’ strike in the 88th minute – only for Josh Kay to equalise at 4-4.

Morris, though, eventually scored what proved to be the winner with 102 minutes on the clock.

Championship side QPR avoided an upset as they saw off League One leaders Rotherham 8-7 on penalties, with keeper Jordan Archer saving two spot-kicks.

After a goalless 90 minutes, Michael Ihiekwe (98) put the Millers in front, but an equaliser from Lyndon Dykes (115) sent the tie to a shoot-out.

In Saturday’s late kick-offs, Emiliano Marcondes scored a hat-trick to give Championship leaders Bournemouth a 3-1 win at Yeovil, while substitutive Ryan Law struck in extra time as League One Plymouth secured a 1-0 victory away to 10-man Birmingham.