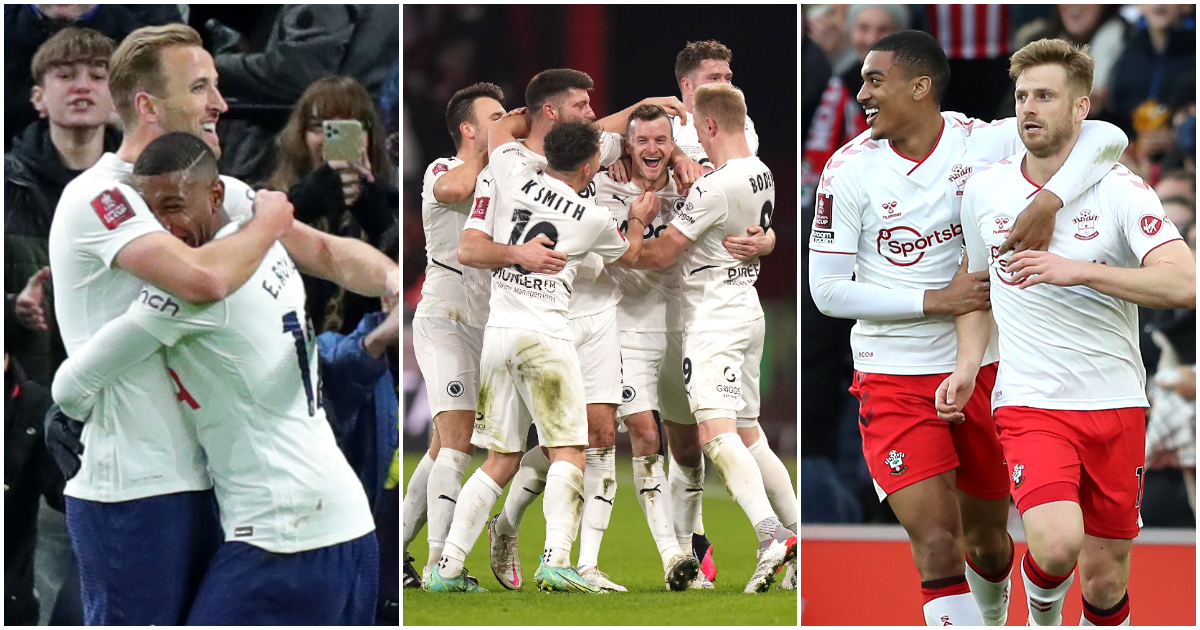 Just 16 teams remain in the FA Cup ahead of a (mostly) midweek fifth round, so which of them should be taking it most seriously and which should just be having a bit of good, clean fun?

It’s time for some rankings…

16. Boreham Wood
A scarcely plausible fifth-round tie away from home at a Big Premier League Club with a Historic, Iconic Famous Old Ground? It is the most Enjoy The Day Out game imaginable for players and fans alike after a phenomenal run. Beating Everton is probably a step too far, but you wouldn’t rule out the Plucky Non-Leaguers giving the Beleaguered Big Boys a Fright would you? That’s more than enough title case japery now.

15. Peterborough
Is a game against Manchester City a welcome respite for the East Anglians meandering inexorably (can you meander inexorably?) towards relegation to League One or is it just absolutely terrifying? A kinder draw and we’d be firmly in welcome distraction territory here, but that is not a kindly draw.

14. Norwich
Is a game against Liverpool a welcome respite for the East Anglians meandering inexorably (can you meander inexorably?) towards relegation to the Championship or is it just absolutely terrifying? A kinder draw and we’d be firmly in welcome distraction territory here, but that is not a kindly draw.

13. Luton
A quirk of this year’s fifth round is the presence of four clubs currently sat between third and eighth in the Championship table. It’s also a very tight play-off scrap this year, with 10th-placed Coventry just eight points off third-placed Huddersfield with two games in hand, so there’s no room for any complacency for anyone below Fulham and Bournemouth, the seemingly home-and-hosed top two. It makes FA Cup progress a distinctly double-edged sword. Luton have the fewest resources of this quartet, 13 league games still to play, and face Chelsea in round five. Enjoy it, don’t pick up any injuries, and then back to the real quiz we reckon.

12. Middlesbrough
The next promotion-chaser and conquerors of Manchester United are in a similar boat, and have the same number of league games remaining. But they also have a tantalising fifth-round draw at home to a clearly dangerous but demonstrably fragile and beatable Spurs. At the very least we’d expect Boro to be less welcoming hosts than daft old Leeds were at the weekend. If you’re connected with Middlesbrough in any way and haven’t watched everything Spurs have been up to recently and thought about the possibilities then you don’t have blood in your veins. Recent defeats at Bristol City and Barnsley are distinctly sub-optimal, though, and thus the focus must remain on the main job.

11. Nottingham Forest
Have knocked out the last two winners, with Leicester absolutely spangled in particularly eye-catching style last time out, and a home game in the fifth round against a non-Premier League team is clearly a great opportunity. But they also have the least wriggle room of this promotion-chasing quartet and may conceivably already have had their fun in this run. But oh, what fun it was.

10. Huddersfield
Arguably the freest of the promotion chasers to give this a crack because they have the most margin for error sitting (slightly precariously, admittedly) in third and with two fewer league games to cram in to the remaining weeks of the season than the other three. Forest away is clearly tricky, not least because of what they’ve already done in rounds three and four, but it’s also relatively uncontroversial to say Forest are not as good as Chelsea or even this silliest of Spurs sides. You’d give it a red hot crack, wouldn’t you?

9. Stoke
The last of the Championship contenders and the ones who should take it the most seriously purely because they might as well; they’re 10 points off the play-offs and 15 clear of relegation. Have a swing at it. Can go no higher in these rankings for the pure and simple reason that the last time a team from outside the top flight won the FA Cup was over 40 years ago and, realistically, that will remain the case despite such teams comprising almost half this season’s last 16.

8. Everton
Have contrived to get themselves thoroughly entangled in a relegation scrap, the silly sausages, and thus even a home draw against non-leaguers for a place in the last eight serves mainly to evoke memories of repeating Wigan’s great FA Cup-relegation double in 2013. A fun question to ask your miserable Everton-supporting friends is whether they’d take that bittersweet outcome now.

7. West Ham
Southampton away is not a great last-16 draw but top four probably isn’t going to happen and West Ham are precisely the sort of side that could absolutely pick a path to Wembley if things fall their way. Would be far higher here were it not for the Europa League, which might involve a few more games – and at this stage it is literally only a few – but carries with it the tantalising double-whammy of a first piece of silverware in over 40 years and a Champions League spot. Thus, it has to take priority.

6. Crystal Palace
There’s a definite 2015/16 flavour here, isn’t there? Palace had a curiously back-to-front run to the final that season, with impressive away wins at Southampton and Spurs early on earning them pretty plum quarter-final and semi-final ties against Reading and Watford before they came so very close to pulling Manchester United’s pants down at Wembley. Would Palace have held on to their lead if Pardew hadn’t danced? It’s one of the great counterfactuals of the age. It’s been an easier start to this year’s competition but they definitely feel like a side that could reach another final. Palace don’t really have anything to worry about in the league, have enough matchwinners to bother anyone On Their Day and a home draw against lower-league opposition in round five. They should be taking this very seriously indeed. No dancing, though, Patrick. Please.

5. Manchester City
Failure to win the FA Cup would make this the first year since 2017 and only the third in the last 10 where City would have failed to lift a domestic cup at Wembley. An unthinkable disaster, we’re sure you’ll agree, but still not enough to lift it above third on their list of priorities now that there inexplicably appears to be a title race of sorts breaking out.

4. Liverpool
Tentative quadruple talk has begun after Liverpool’s hard-fought and ultimately very, very funny Carabao success against Chelsea on the back of a slight weakening of City’s Premier League stranglehold. They probably won’t do it because nobody ever does but in a slightly counterintuitive way winning the Carabao makes this more important rather than less. An overdue FA Cup win for a club that last won it 16 years ago would always have been welcome; now it could be part of something truly historic.

3. Southampton
Absolutely slap-bang in that sweet spot of having neither European aspirations nor relegation fears while also being in very decent form as the business end of the Cup comes around. West Ham represent a significant fifth-round obstacle but Southampton have taken four points off the Hammers in the league this season and are currently very much in “fear nobody” territory having deservedly beaten Spurs away from home and held both Manchester clubs in recent weeks.

2. Chelsea
With hilarious Carabao heartbreak coming hot on the heels of a Club World Cup win that the Celebration Police swiftly decreed didn’t count actually, and all amid a swirl of unpleasantness over their owner and what ‘stewardship’ means (SPOILER: nothing whatsoever) this is suddenly a club that could do with some good news. The Celebration Police are firmly of the old school, so a win in the grandest old cup competition of them all would surely count even for what is now a pariah club.

1. Tottenham
It’s a confirmed 15-year silverware drought if they don’t win this and another 12 months of exhausting trophy cabinet banter from gobshite paint dogs and everyone else on the socials. Have probably managed to sabotage their top-four hopes sufficiently in the last few weeks that this competition represents the best hope of a genuine happy ending to what has been, even by Spurs standards, a confusing and topsy-turvy old season. It remains a genuinely mind-melting fact that, while only two clubs have won this thing more often, Spurs haven’t reached a single FA Cup final in the Premier League era. A non-exhaustive list of clubs to reach the final more recently than Tottenham includes Watford, Crystal Palace, Aston Villa, Hull, Wigan, Stoke, Portsmouth, Cardiff, West Ham, Millwall, Southampton, Newcastle, this week’s fifth-round opponents Middlesbrough, Everton, Sheffield Wednesday and Sunderland. They really, really, really need to put that right.