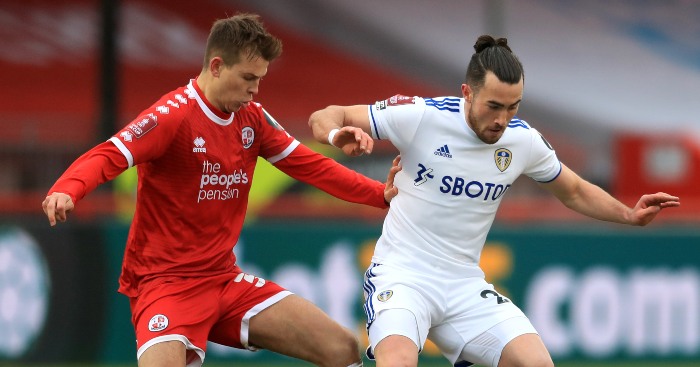 The FA Cup third round weekend reveals much about the modern game and gives us plenty of food for thought.

Try this exercise. Put on the Match Of The Day highlights of all the matches, turn off the sound, get someone to fast-forward through the opening titles for each game – so you don’t know which match it is – then half-close your eyes and squint so that you can only see moving blurs of colour. While the colours of the shirts will give you a clue who is playing, it makes it much harder to know for sure.

When we do not know the teams that are playing, we deny ourselves the default preconceptions that are inculcated into all of us. We have to judge what we see for what it is (albeit being a blurry sort of image when squinting) And when we do that, it is remarkable just how hard it is to distinguish the elite players and teams from the grunt labour almost all of the time.

Watch Blackpool’s second goal v WBA. It’s a fast, direct (some might say vertical) break out of defence, a couple of incisive passes and a 20-yard strike into the corner of the net for a goal. If you didn’t know it was the Seasiders, that could easily have been any top Premier League club.

We automatically assume a third or fourth-tier club will be worse at football than a top-flight team. That is a pretty unshakable belief. And while it may largely be true overall in terms of results, it is not true for all games and crucially it’s not true for large periods of many games.

Of course there were also examples of lower-league players scuffing shots, missing the ball, misplacing passes or simply playing without any imagination or creativity. But then if you saw the deathly dull lumpen games between Arsenal and Newcastle, or Manchester United and Watford, there was plenty of low-grade play by top players in those games. If you were squinting, you could easily have thought they were third or fourth-tier clubs.

We too easily dress up the elite player’s volley that is tipped over the bar as high skill, but dismiss the lower-league player’s effort as a lucky punt.

We assume there’ll be a big difference in ability between any top-flight side and any lower-league side but there isn’t and that’s true time and again in the third round.

In most sports, those called the elite are really good at their sport almost all the time. But in football this is not true. It is amazing how poor many top-flight players are at the things they’re paid so highly to do. Witness Chris Woods’ terrible header six yards out at the back post v MK Dons. He completely mistimed and miscued it. It was exactly what you’d expect an amateur player to do, not someone who is defined as playing elite football.

There are endless examples of this. Goalkeepers who let the ball squeeze under them. Expensive midfielders who seem unable to find a teammate with a pass more than 60% of the time. The striker who balloons the ball to the corner flag when attempting a shot. The one-footed defender who might as well have a lump hammer tied to one leg. The corner-taker who can’t clear the first man even given half-a-dozen opportunities. Free-kicks that just bounce off the wall. And I’m not just talking about everyone who plays for WBA.

On third round day the fog of marketing, money, hype and default thinking briefly clears and the small, narrow differences between top flight and lower league or amateur have a light shone on them. Much of them relate to superior fitness, by which I mean, ability to run harder for longer without getting quite as tired, which in return relates to resources rather than talent. A lot of cup games are won by the top-flight clubs simply because the opposition is knackered.

My overarching point here is that many players who play for most top-flight sides are over-regarded, precisely because of the fact they play for top-flight sides. Because so much money is paid for so many of them in transfer fees and wages, we assume this is concomitant with being consistently great at football, understandably feeling that if they were not, no-one would pay a penny for them. But we can see very clearly in the third round of the FA Cup that this view has very limited heft.

The truth is more typically that there are relatively few brilliant footballers who are in a different class and the rest ride on the back of those players’ reputations, benefit disproportionately from their brilliance and bask in their golden light. Take those fantastic players out of the team and suddenly the makeweights look more like lower-league players.

Conversely, we underplay how good (or bad, depending on your perspective) lower-league players often are for the same reason, feeling if they were really any good, they’d be playing in a higher division. However, if put with the brilliant players, they’d be made to look far better too.

With the almost immeasurably big gap in finances between the top 20 clubs and the rest, the gap in quality should be equally, or somewhere nearly, as wide, but it isn’t. The third round of the cup reveals a profound degree of diminishing returns, with first-team squads assembled at huge cost by clubs who have had income of at least £100 million per year, often for many years, not being significantly better than players from teams on tight budgets.

If clubs are playing sub-optimal teams and that’s why they struggle, that only goes to underline how poorly their riches have been invested. If you can’t assemble a reserve side that is much better than a club with at least 100 times less income, then that is a serious failure of investment.

Of course, the richer side usually, though not always, wins but we’re always being sold the idea that money always equals greater quality. But if you squint hard, the third round of the FA Cup shows that is only true sometimes and often not true at all. And that’s not only a profound economic lesson but a very uplifting one.