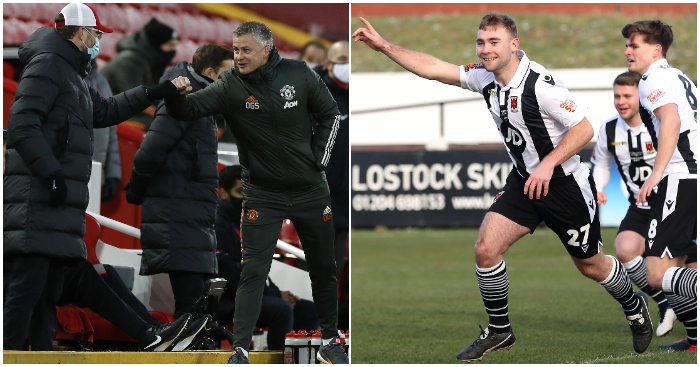 Game to watch – Manchester United v Liverpool
Even before we’ve reached a consensus on what really occurred last weekend, here we go with round two of the double-header between the champions and the leaders.

Sunday’s Premier League meeting at Anfield certainly prompted more questions than answers. For both sides, it was an opportunity missed. Liverpool failed to claw back Ole Gunnar Solskjaer’s pacesetters, while United seemed content – too content, according to many – to consolidate their advantage rather than extend it as their rivals muddled through without a senior centre-back.

The pressure is off somewhat with no points up for grabs and – only? – a place in the FA Cup fifth round at stake at Old Trafford. Perhaps some easing of the tension will allow both sides to relax and flourish this weekend, especially while the option of settling for a draw is unavailable.

Both managers have decisions to make in their selections. Since Jurgen Klopp went strong against Aston Villa’s Under-12s in the last round, we have to assume he will do the same again. Especially while he attempts to play his front three into something resembling form.

For Solskjaer, the inevitable focus will fall upon Donny van de Beek. There is not a great deal more that the Dutchman can do with what little football he is being given, but sticking it to the scousers will certainly increase the clamour to make him more of a regular feature.

Until the team sheets go in, we don’t know exactly what to expect from this tie. Which already makes it more interesting than last week’s meeting. But with the onus on United to attack and Liverpool not capable of much at the minute, it promises to be a more entertaining affair.

Team to watch – Chorley
Having been overshadowed by Marine in round three, Chorley get their moment in the spotlight on Friday night when they host Wolves.

They’ve certainly earned it. The National League North side, the lowest-placed team still remaining in the competition, have already dispatched EFL opponents Wigan and Peterborough as well as Derby’s stand-ins on the way to the fourth round.

What chance of another upset? Chorley are certainly the in-form side having won nine and drawn three of their last 15 matches. By contrast, Wolves’ win over Crystal Palace in the last round is their only victory since Christmas. Nuno’s men are six without a win in the Premier League.

Their last outing, the 3-2 home defeat to West Brom in the Black Country derby, has given the hosts reason to believe. Chorley were represented at Molineux by assistant boss Andy Preece, who made it back in time for the sixth-tier outfit’s 3-2 comeback win over Farsley Celtic. Upon his return to Victory Park, he delivered his verdict to manager Jamie Vermiliglio.

“No word of a lie, he’s come back from watching them and said ‘we’ve got a chance’,” said the 38-year-old PE teacher.

It wouldn’t be the first time Chorley have p*ssed all over Wolves’ butter pies. At Burnden Park 35 years ago, they won 3-0 in a first-round second replay. Only a few days earlier had Wolves signed a certain Steve Bull and many see that defeat as rock-bottom for the Molineux men before they began to climb back up from Division Four.

So it is a very different Wolves that will travel to Lancashire on Friday night. But Chorley still fancy their chances. Either way, regardless of whether Wolves are put to the sword, Adele will be getting murdered…

Manager to watch – Frank Lampard
Ooh Betty. Frank is certainly in a little bit of trouble but we are assuming that he will take Chelsea into their clash with Luton because if Roman Abramovich was planning on squeezing the trigger this week, he would surely have done it already.

Defeat to the Hatters will put Lampard in the centre of the crosshairs. Tony Cascarino reckons the manager has three games to save his job but being bombed out of the cup by Championship opposition will surely see Lampard replaced before Wolves and Burnley come to the Bridge.

Sunday lunchtime’s clash could have been another chance for the likes of Timo Werner and Kai Havertz to get their eye in, but Lampard must decide whether again to put his job in the hands of some of the players he felt on Tuesday failed to meet their minimum obligations.

Sadly for the under-fire manager, picking 11 Mason Mounts is not an option. Lampard had a fortnight to get a tune out of his under-performers and what followed spoke little of his coaching talents. We’ll see on Sunday what he can do in four days and whether some of his players are interested in saving their boss.

Player to watch – Carlos Vinicius
The Tottenham striker channelled Kylian Mbappe after scoring against eighth-tier Marine in the last round, but you can hardly blame the lad for trying to catch the eye.

Vinicius is on loan from Benfica but this season he has had to make do with cup appearances and the occasional Premier League cameo while Harry Kane scores all the goals with Heung-min Son.

A 15-minute hat-trick at Marine accounts for half of his goals while three assists mean Vinicius has been involved in a goal every 49 minutes. But still we don’t really know if he has what it takes to be Kane’s stand-in on a long-term basis, especially while Spurs court Danny Ings.

Vinicius will undergo another assessment at Adams Park against the Championship’s bottom side Wycombe. A goal should be celebrated with nothing less than the full Tardelli.

Football League Premier League game to watch – Aston Villa v Newcastle
The EFL offering this weekend comes in the form of three Championship games scheduled alongside the FA Cup action on Friday night and Sunday afternoon, but on Saturday night, there is some bonus Premier League viewing, with Villa and Newcastle providing the entertainment.

Okay, so just about the only people entertained by Newcastle at the moment are Sunderland fans, who need some respite from their own abject misery. And for the Toon Army, this will be another glimpse at how life could be, with Villa proving that you can do more than simply exist in the top flight. And that there is life after Steve Bruce.

It could all be very awkward for the Newcastle manager. Regardless of who you believe to be primarily to blame for the Magpies’ misery, Bruce is in a tight spot. After the defeat to Sheffield United last week, a performance he labelled as ‘absolute sh*te’, the Toon boss vowed to do things his way. A 3-0 defeat at Arsenal promptly followed.

There is clearly no appetite at Newcastle to sack Bruce, not among the board at least. But the manager desperately needs something tangible to cling to even if three points won’t take them any higher than the 15th place they currently occupy.

European game to watch – Schalke v Bayern Munich
After Schalke missed the chance to climb off the foot of the Bundesliga simply by being Schalke on Wednesday night, it is bottom versus top at the Veltins Arena on Sunday afternoon.

It could be an opportunity for Robert Lewandowski to fill his boots. After all, Bayern have scored 16 Bundesliga goals without reply against Schalke since the start of last season. This term began with an 8-0 humping at the Allianz Arena. But more recently, Bayern have hardly been firing on all cylinders. Fortunately for the champions, nor have any of their title rivals.

Here’s a chance to check on Matthew Hoppe against the Bundesliga and Europe’s best. The 19-year-old scored his fifth goal in three games in Schalke’s 93rd-minute defeat to Cologne having become the first American to bag a Bundesliga hat-trick in the Miners’ first win in almost a year a fortnight ago.