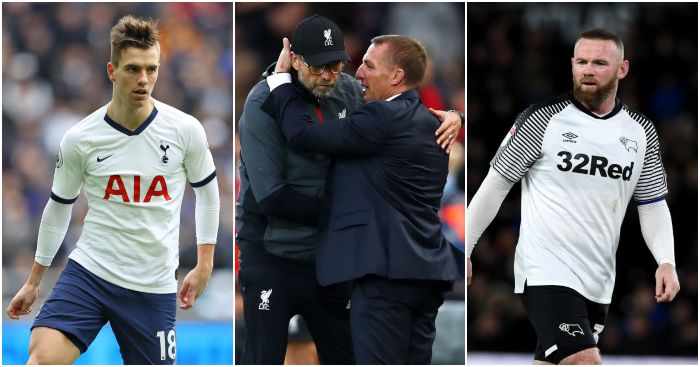 Game to watch – Chelsea v Liverpool
With the last coach to manage Liverpool in an FA Cup game having departed, Jurgen Klopp might be forced to actually take his place in the dug-out at Stamford Bridge.

Both he and Frank Lampard have promised to field strong sides on Tuesday. Liverpool are hoping to keep a wonderful season interesting in the final few months. Chelsea will prioritise the Premier League but would relish something tangible to close the campaign.

Only three managers have started a season at Chelsea under Roman Abramovich and been permitted to finish it trophyless. Claudio Ranieri and Carlo Ancelotti immediately paid with their Italian jobs, while Jose Mourinho had deposited just about enough in the bank to spare him in his second tenure.

It is a reality Frank Lampard may soon face. In the event that Chelsea do not collapse under the pressure of a Europe-chasing pack, he will stay as manager. But he must navigate a route past either the best team in the world with a point to prove, or a side that holds a 3-0 advantage to deliver silverware.

Perhaps that was never the initial aim. Chelsea convinced themselves in the summer that the absence of Eden Hazard and introduction of youth meant Champions League qualification was the highest possible bar they could reach. A trophy would always be welcome but that was secondary.

Now, Lampard might need something like the FA Cup to hang his hat on as proof of his credentials.

Klopp requires no such thing. But he will demand a response from Liverpool after that Watford setback. The players that survive the Vicarage Road massacre must atone for their many mistakes. Those who witnessed the ugly scenes from the sidelines have to take this chance to impress.

Chelsea have pushed them close twice already this season; if the Blues make it a hat-trick to reach the quarter-finals, an incredible Liverpool campaign will threaten to peter out by March.

Player to watch – Wayne Rooney
It is only natural that, over the course of an 18-year career, Wayne Rooney will have faced some teams without beating them.

Three games against Barcelona have ended in a draw and two defeats. Four meetings with Villarreal produced nothing but 0-0 draws. Five appearances against New York Red Bulls brought two draws and three defeats.

That should not be expected to change on Thursday. The 34-year-old plays as deep for Derby as he did in his later years at Old Trafford, or when Sam Allardyce pretended to manage England that one time. Rooney has scored four times, including in the last round against Northampton, but will instead engage in the world’s slowest midfield battle against Nemanja Matic.

He will perhaps be given hope by Derby’s most recent game against United. The Rams won a September 2018 League Cup tie on penalties, although both teams have since changed managers. Ole Gunnar Solskjaer might actually spontaneously combust at the sight of someone with more knowledge of The United Way™ than him.

Manager to watch – Brendan Rodgers
“My ambition when I came in was to get European football for Leicester and to win a cup,” said Brendan Rodgers last April, two months after his appointment at the King Power Stadium.

While he and the Foxes seem to be doing their utmost to reverse any fine work in pursuit of his first aim, the second remains eminently possible.

Rodgers has never really enjoyed success in the FA Cup. He has been knocked out in the fifth round twice and the fourth round thrice, advancing further only once. His most recent campaign in the competition was comfortably his best.

Yet even that was tinged with regret and disappointment. Liverpool faced three lower-league clubs and navigated two replays to reach the 2015 semi-final, where they were beaten 2-1 by a struggling Aston Villa side inspired by Jack Grealish.

He remains, for all of his wonderful efforts over the past 12 months, without a trophy in England. And the only piece of possible silverware missing from Leicester’s collection is the one Rodgers might well crave. Birmingham, beware. Or be given hope by the Foxes being without a win in five games. Your call.

Team to watch – Tottenham
So it comes to this. At least part of the reason – perhaps even the entire rationale – of trading Mauricio Pochettino for Jose Mourinho could be rendered pointless as early as March.

Daniel Levy did not make the decision to change managers based on Champions League qualification; Pochettino remains the only Premier League manager since Sir Alex Ferguson to reach the tournament four years in succession.

He did not do it to enact some sort of transfer overhaul; Tottenham were beset by the same self-inflicted issues in the last window and a new head coach did nothing to negate them.

Nor was the idea to give the club a new identity; it never really needed to head in a completely different direction. This current purgatorial football was the answer to a question no-one was asking.

The only possible explanation, the one thing Mourinho could offer that Pochettino could not, was a proven track record; an ability to sate a thirst for trophies; a collection of silverware that would make a magpie blush.

The Premier League retains an obvious priority, while a Champions League first-leg deficit could be overcome, but winning that competition is unthinkable in their current state. The FA Cup, therefore, is crucial to Mourinho’s tenure, at least in the short term.

He has to prove his main selling point bears relevance in the current day. If this malaise extends to losing at home to Norwich in a fifth-round cup tie then questions will be asked as to why Tottenham sold their souls to the devil.

Football League game to watch – Exeter v Crewe
The League Two promotion race is something to behold. The advantage leaders Swindon hold over fifth-placed Plymouth is equal to the gap the Pilgrims enjoy over Northampton in sixth. While the final two play-off spots are likely to be decided between four teams, the three places for automatic ascension to League One remain open.

Two of the sides who occupy the other podium positions behind Swindon face off on Tuesday. Crewe, a point ahead of Exeter, visit St James Park with the intention of establishing some much-needed breathing space.

The pressure on both only increased at the weekend. With Swindon spared a ruthless beating by Mansfield due to a waterlogged pitch, neither Exeter nor Crewe could take advantage. The former drew at home to mid-table Crawley while the latter were held by lowly Morecambe.

A repeat of October’s 1-1 stalemate Gresty Road would surprise no-one and potentially suit neither. Exeter had won their previous five meetings and, after defeats in the 2017 and 2018 play-off finals, would love to revert to that particular type.

European game to watch – Juventus v AC Milan
Leaving aside the curious decision to play the Coppa Italia semi-final as planned (only preventing fans from certain regions in Italy from attending) while Juventus’ game with Inter on Sunday was postponed altogether, Wednesday’s second leg ought to be entertaining.

A stoppage-time Cristiano Ronaldo gave The Old Lady something to cling to after Milan threatened to take a slender advantage back to Turin. But the weekend havoc caused by the Coronavirus means Juventus have not played since that disappointing defeat to Lyon, while Milan’s last outing was a draw against Fiorentina.

Neither will see much of a reason to consider themselves as anything other than favourites. Juventus have the obvious talent but are riddled with coaching, mentality and tactical issues. Milan have only lost once this calendar year and are finding their feet under Stefano Pioli. Coppa load of that.