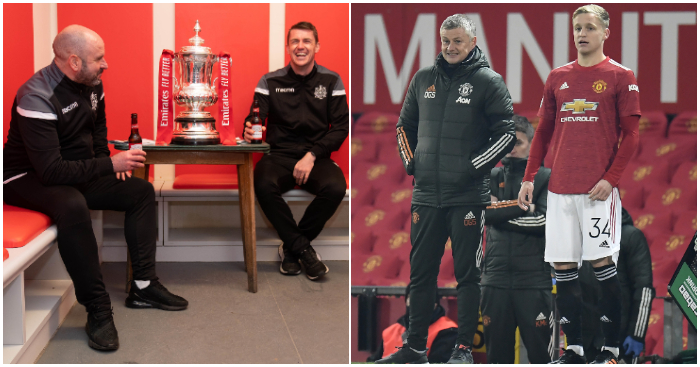 Game to watch – Marine v Tottenham
Third-round weekend, you say? Magic of the cup is it, Sir? David versus Goliath. Ooh. Giantkillings. On cabbage-patch pitches. Postmen pitted against professionals. Ooohhh.

It’s the one weekend of the year that football meets the old testament and few make a better Goliath than Jose Mourinho. He takes his Tottenham players to the Northern Premier League Division One North West surroundings of Marine. It’s the archetypal third-round clash. At least, it would be if anyone was allowed to watch it.

As it is, the closest anyone will get to seeing Mourinho’s millionaires taking on NHS workers, a PE teacher and a bin man is the sofa on Sunday evening. Covid restrictions and the absence of supporters has cost the eighth-tier hosts around £100,000 but Marine have found other, more creative ways of milking their moment in the spotlight and they aren’t going to let a global pandemic spoil their fun.

Mourinho will doubtless turn on the charm, the whole time wondering how soon can he get back on the bus, and the Spurs boss will obviously take the opportunity to rotate his squad for a tie which features the biggest ever gap in league positions. Which means we can all see how Gedson Fernandes and Carlos Vinicius cope at the Marine Travel Arena.

Fernandes may well be heading back to Benfica after the game, if he hasn’t made a break for it already, but for Marine’s players, furlough awaits. Their season is on hold and, unless they turn Tottenham over in the biggest shock ever, then who knows when they will play next with their season currently suspended.

Team to watch – Derby, Villa and numerous other youth and reserves teams
The Rams have been quite upfront about their predicament this week. Covid has taken hold of Wayne Rooney’s squad and the player-manager will join his squad and staff in isolation this weekend.

So to Chorley on Saturday lunchtime will go a mixture of the Under-23s and Under-18s. Not that the prospect of an easier ride appeals to the hosts’ manager Jamie Vermiglio.

“We want to see Wayne Rooney walk into Victory Park,” Vermiglio said before Derby revealed the scale of the outbreak. “We want to be able to shake his hand, or fist pump or elbow bump. Even though it would disadvantage us if he were here, it would give the occasion a little bit more merit. The last thing we want is to be playing against an under-18 side. It’s our chance to shine against good players.”

Derby are certainly not the only side scratching around for a team. Shrewsbury’s trip to Southampton has been postponed due to an outbreak at the League One club while, as it stands, ties involving Middlesbrough, Sheffield Wednesday and Villa are in doubt. If Villa get their game on, they will field an Under-23 team. The Reds could have their revenge for the spanking the Villans gave their youth team in the Carabao Cup just over a year ago.

Player to watch – Donny van de Beek
While third-round weekend is all about the Davids, we have to talk about the Donnys and the Goliaths because #numbers.

Manchester United face Watford on Saturday night as Ole Gunnar Solskjaer’s side take their first step towards semi-final defeat. With Bruno Fernandes starting to look like a player who has not far off carried his team for almost a year, United’s talisman is sure to be rested for the visit of the Hornets.

In his place will surely come Van de Beek. The £40million midfielder has made only two Premier League starts since joining United and he was given all of three minutes of the Carabao Cup semi-final on Wednesday.

It has been a hugely frustrating period for Van de Beek, as well as United and Holland supporters. We don’t know what was agreed before he signed on the dotted line – perhaps the plan all along was for the 23-year-old to watch and learn for most of his maiden season in the Premier League. Regardless, Van de Beek needs another impressive performance against Watford, because when he has played, he’s looked sharper than you might expect of a midfielder who has spent most of the campaign picking splinters.

Van de Beek isn’t going to play regularly in the no.10 role – that belongs to Fernandes. But he would be able to play more often in a deeper role if United had a top class defensive midfielder who soothed Solskjaer sufficiently so that he didn’t feel it necessary to play two defensive screeners. So it will be interesting to see what role Van de Beek is given against Watford. Will he act as Fernandes’ stand-in or, as he did against Istanbul Basaksehir in the Champions League, might he start at the base of midfield and use his passing range to get United through the Hornets’ lines?

Manager to watch – Mikel Arteta
It’s all about momentum for Arteta and Arsenal when they begin the defence of their trophy by hosting Newcastle on Saturday evening.

After a wretched few months spent under dark clouds at the Emirates, the sun is shining on the Gunners boss after three victories in a week ended a seven-match winless run which threatened his continued employment. The baying hordes have turned their attention to Frank Lampard, and Arteta is being left in peace to guide his young side up the Premier League table.

The issue for Arteta this weekend is whether he continues with those youngsters. Emile Smith Rowe has made a huge difference in the no.10 role and having not played in the Premier League before Boxing Day, the last thing he needs is a rest. Bukayo Saka is more deserving of a breather but the winger may prefer to play on rather than risk interrupting his purple patch.

Rob Holding has already played more this season than during any of his previous four seasons with the club so the novelty means he won’t want to give way to the returning Gabriel. Nor will Pablo Mari, who quietly has made a very positive impression since Boxing Day.

Perhaps the one change Arsenal fans will want to see is the return of Thomas Partey. Otherwise, with five days before they host Palace, why fix something that for the first time in a long time doesn’t appear broken?

Football League game to watch – Sunderland v Hull
FA Cup weekend sees Sky Sports show the EFL some love with three games on offer on Saturday. Leaders Lincoln face fifth-placed Peterborough at lunchtime before the Black Cats and Tigers get their claws into each other at 7:45pm.

Only on Wednesday was it decided to play this game, which was originally postponed on Boxing Day because of Covid. Sunderland were due to face Fleetwood on Saturday with Hull scheduled to play Wigan, but outbreaks within their opponents’ ranks saw Lee Johnson and Grant McCann agree hastily to get it on.

Hull are currently in second while Sunderland flail around in 11th, though they are only three points off the play-off spots. If Posh lose at the leaders and Johnson inspires a Black Cats victory, they could go fifth, but only if Ipswich balls it up at second-bottom Swindon, also on Sky Sports at 5:30pm.

European game to watch – RB Leipzig v Borussia Dortmund
If Arsenal versus Newcastle doesn’t appeal on Saturday evening, then the Bundesliga has you covered with second-placed Leipzig hosting fourth-placed Dortmund.

Leipzig went top of the table last Saturday and looked set to stay there on Sunday when Bayern trailed 2-0 at home to Mainz, before the champions woke from their slumber and scored five in the second half. Julian Nagelsmann’s side have the stingiest defence having conceded only nine in 14 matches so far this season and though they are unbeaten in eight games with four consecutive clean sheets, Dayot Upamecano and co. will have to be at their best to keep Erling Haaland quiet.

Dortmund got back to winning ways last week with Jadon Sancho finally remembering the way to goal. They can go third with victory at Leipzig but defeat would likely leave them 11 points off the leaders before the halfway point. They already sit closer to Stuttgart in 11th than Bayern at the summit. If interim coach Edin Terzic has a hope of landing the permanent gig, the win over Wolfsburg needs to be the start of a run.