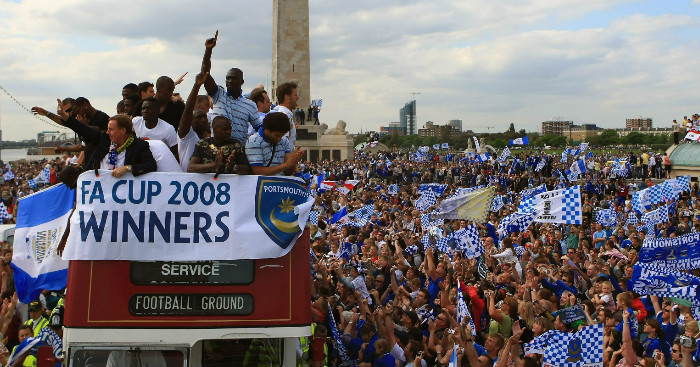 It would be fun to imagine Portsmouth’s fortunes since they won the FA Cup in 2008 were the result of some hackily-written curse imposed on them by a mysterious, pointy-moustached figure looking to tell a somewhat dull story about being careful what you wish for.

The reality is much more prosaic and much more depressing. The accepted phrase for such a catastrophic financial bottoming-out is ‘Doing A Leeds’, but even the Yorkshire club ceased their plummet in the top half of League One. Portsmouth just kept going: from eighth in the Premier League and FA Cup winners in 2007-08, all the way down to 16th in League Two – the confusingly-named fourth tier of English football – just seven years later.

Those miserable years were barely brightened by a second appearance in the FA Cup final in 2010, the same year they slipped out of the Premier League. They suffered not only through a total of three relegations, but also nine full-time managers and an additional two caretaker managers, all of whom came to the club expecting an uphill battle at best only to act as ballast in a seemingly unstoppable slide.

The Portsmouth Supporters Trust was able to take control of the club following a High Court decision in 2013 after raising an incredible £2.5m, which finally led them out of administration. Those loyal fans had kept attendances at Fratton Park impressively high throughout their deepening woes, and now, finally, they were able to start thinking about a future that didn’t end in non-league football at best or, more likely, in extinction.

The next major milestone in their slow recovery came in 2015, when Paul Cook joined as manager. The Scouser had just led Chesterfield to the League Two title and then straight into the League One playoffs. Portsmouth were the immediate beneficiaries after convincing him to take the step back down the divisions: their sixth-placed finish represented their first year-on-year improvement since that magical season in 2008, and the following season – 2016/17 – saw them promoted as champions.

Cook left for Wigan after leading Pompey to that title win, and immediately managed them to a personal second-successive league title.  The man who replaced him was Kenny Jackett. In terms of personality, the patient, understated Jackett is the polar opposite of passionate Liverpudlian Cook;  but he is also about as steady a hand as you can possibly get at this level.

His CV includes year at hometown club Watford, where he spent his entire playing career; three years at Swansea that included a Football League Trophy win in a reign that set them on course for their mach to the Premier League; six years at Millwall that featured a League One playoff win; and three years at Wolves that saw them go one better by clinching the League One title.

If a five-game, 38-day spell at Rotherham was something of a blot on that record, then his first 18 months have all but erased it. Finishing eighth in their first season back in League One last season was perfectly respectable for such a young side: all four of their most regularly-appearing players (Luke McGee, Jamal Lowe, Matt Clarke, and Ben Close) were aged 23 or under.

Despite being sold to an investment company spearheaded by billionaire and former Disney CEO Michael Eisner to coincide with Jackett’s appointment, Portsmouth still have the fifth-youngest squad in League One, with youth product Jack Whatmough – a 22-year-old centre back – looks like a particularly promising prospect.

Understandably, then, their summer transfer business primarily saw them bolster the side with a bit of experience in the shape of goalkeeper Craig MacGillivray from Shrewsbury, midfielder Tom Naylor from Burton, and left-back Lee Brown from Bristol Rovers.

It is a distant remove from the days when they would spend millions to bring in England internationals from big-name clubs – Peter Crouch from Liverpool, Glen Johnson from Chelsea, Jermain Defoe from Tottenham – but it is sustainable, it is sensible, and most importantly, it is getting results.

Had they not been in FA Cup action this weekend, they would instead have had the chance to maintain their lead at the top of the division; but after pulling off a second successive impressive FA Cup performance against good Championship opposition, Portsmouth won’t be worrying too much that Luton Town have put themselves two points ahead of them having now played a game more.

The FA Cup third round saw Pompey dismiss Norwich – a side with designs on achieving automatic promotion to the Premier League this year – thanks to Andre Green’s 95th-minute winner against the ten-man Canaries; and despite having lost both of their league games in the intervening weeks, Portsmouth were again in good form against Steve McClaren’s mid-table Queens Park Rangers, who fielded a strong if slightly injury-stricken side at Fratton Park.

Pompey’s Brett Pitman had a first-half goal disallowed for a foul, and Louis Dennis produced the best effort of the game thus far on the stroke of half time, forcing QPR keeper Joe Lumley to tip the ball over the bar with a dipping half-volley.

A good start to the second half allowed Portsmouth to force a slice of good luck: Brown put in a hopeful cross from the left, and visiting defender Joel Lynch hacked the ball into his own goal to give Pompey a 63rd-minute lead.

That lasted just 11 minutes as Nahki Wells levelled things up for QPR, but Portsmouth did enough to hang on and force a replay. That keeps them alive in two cup competitions, with Pompey also looking forward to a Checkatrade Trophy semi-final against Bury.

A victory in that tie would see them return to Wembley for the first time in nine years; and while they are exceptionally unlikely to secure themselves a second visit in the FA Cup, they may well reflect on their continued presence in the competition as a reminder of the happier days they dream of returning to. Most importantly, there is finally more than a mere scintilla of realism to their fervent hope that maybe, just maybe, they could do just that.