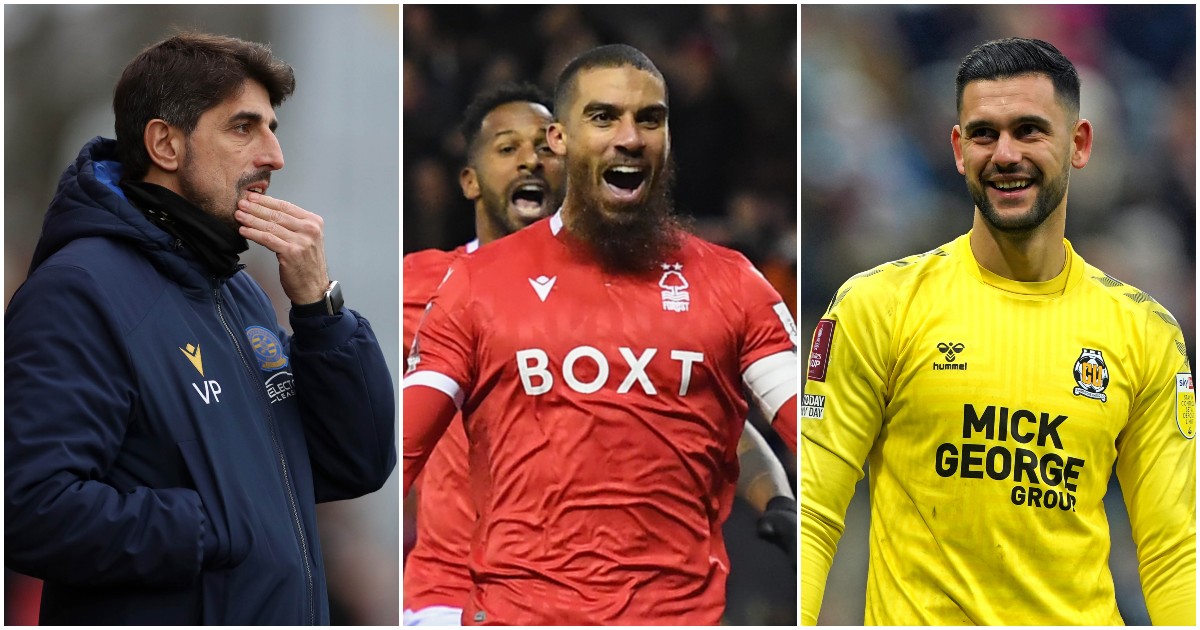 The Premier League edition is here…

Nottingham Forest
On a weekend when the FA Cup’s televised fixtures were brought into sharp focus with heaps of criticism, the interest in Sunday’s latest kick-off was never in doubt. In truth, the 90 minutes were perhaps the least entertaining of the weekend. But once the football is over, it’s the moments and stories that matter. Lewis Grabban’s late winner was the moment that mattered, condemning Arsenal to a second third-round exit against Forest in the space of four years.

The 14-time winners were their own worst enemies from the start of the match to the final whistle with the sort of performance which belies their recent upturn in form, while Forest’s recent mini-slump was brought to an end with a special night at the City Ground which will go down in folklore by the Trent.

Dimitar Mitov
To a man, League One Cambridge United’s performance against the richest club in the world was one for the ages. But it was goalkeeper Mitov whose afternoon will go down in history as the difference between the two sides from opposite ends of the financial spectrum. A series of first-half saves from Newcastle’s roster of top-flight players left the Premier League side flummoxed and frustrated in equal measure.

The second half, as it often does with Cambridge, belonged to Joe Ironside. A scrappy goal was celebrated – twice, thanks to the intervention of VAR – while Mitov was able to largely spectate with the Magpies’ attacking influence becoming lesser as the tie progressed. The Bulgarian goalkeeper didn’t care one jot, and will have undoubtedly made a name for himself to progress further up the EFL having impressed in Leagues One and Two in the past 18 months and now on the biggest stage at St James’ Park.

Tom Ince
Stoke’s injury crisis coupled with postponed fixtures due to Covid has led to a slide down the Championship table, but the opportunity afforded to their fringe players has been taken well by the majority. While first-team regulars such as James Chester, Joe Allen and Sam Clucas continue to frustrate the Potters fanbase, Tom Ince has proven to be something of a revelation this season. Against Leyton Orient, Ince notched his sixth goal of the campaign. Impressively, he is just one goal shy of being Stoke’s top scorer despite playing less than 500 minutes this season. If he continues to provide big moments, he will shoot back up the rankings in Michael O’Neill’s side and be racking up the minutes and goals in no time.

Huddersfield Town
Huddersfield were one of just two Championship clubs to knock out Premier League opposition this weekend. While Forest’s victory over Arsenal was the headline-grabber, the Terriers’ victory over Burnley was no less impressive. With just six places separating the sides in the league pyramid, this can’t go down as a cup shock, but it was a good win nonetheless for Carlos Corberan’s side.

Trailing to Jay Rodriguez’s first-half strike with less than a quarter of the game remaining, Huddersfield’s best performers this season rose to the challenge. Winger Sorba Thomas provided the openings for each of Josh Koroma and Matty Pearson to provide Huddersfield bragging rights in this war of the roses.

David Ferguson
Half a decade ago, Hartlepool defender David Ferguson was released by Blackpool. A drop into non-league football beckoned after departing the Tangerines, from which Ferguson has made his way back up the divisions and into the EFL with his current club.

Keshi Anderson’s early goal made it look like this would only go one way, but the second half saw Hartlepool turn the match around and progress to a fourth-round tie with Crystal Palace. For Ferguson, who scored the equaliser early in the second half, this match was as big as it gets, knocking out his old club for perhaps the most inspiring moment of his career to date.

Veljko Paunovic
This was a new low. Veljko Paunovic has stayed in his job despite Reading being in abhorrent form and looking set for a relegation scrap with no guarantees of coming out on top. As with so many games this FA Cup weekend, the eventual victors were 1-0 down, but National League North side Kidderminster smelled blood and put the Royals to the sword with a second-half turnaround which produced some amazing and a few unsavoury scenes at Aggborough.

Having drawn on Monday to Derby from a two-goal advantage, Reading’s old habits are refusing to die, but such deficiencies being exposed by a strong Derby outfit and a team from a regional league are two very different circumstances which only put more pressure on Paunovic’s current status as Reading manager.

Exiting the cup is not terrible in itself for Reading, who need to focus on staying in the Championship with their already stretched squad. Exiting to a team 79 places below them in the league pyramid is rather different story.

Cedric Kipre
This season more than any other, there are a number of clubs who can benefit from exiting the cup to focus on a heavily packed league schedule thanks to the bout of games being postponed for Covid reasons. West Brom, seemingly secure in a play-off spot with little chance of earning automatic promotion back to the Premier League, are one of few who would have benefitted in multiple ways from a cup run.

But a third red card in two games for the Baggies made for a Brighton turnaround to knock Valerien Ismael’s side out of the cup at the first opportunity. West Brom’s collective temper cost them against Cardiff in the league last time out, and now it has cost them progression in the FA Cup. Cedric Kipre reserves special mention for managing two yellow cards in as many minutes to transform West Brom’s status in the game from control to holding on and then chasing before ultimate disappointment; a feeling Baggies fans know too well this season.

Birmingham
Birmingham’s recent league slump has seen the Blues feeling aptly like their nickname over the festive period. Any hope that the New Year would provide respite for Lee Bowyer’s side has already been taken away. They have now lost both games at home in 2022, first to QPR in the league and now to League One high fliers Plymouth Argyle in extra time. Experienced defender George Friend was sent off a for a second yellow card with a quarter of normal time remaining, and the Pilgrims took full advantage of a lifeless Brum outfit who took until 10 minutes from the end of extra time to register their first shot on target. Another glum day in the second city for Birmingham.

AFC Wimbledon
Boreham Wood’s derby win over AFC Wimbledon was a shock on paper, but to everyone watching this all-London clash between sides from the National League and League One looked like a fixture between two teams much more evenly matched than that. Luke Garrard’s side controlled the game in large portions, taking an early lead and sealing the victory with minutes remaining. More performances like this from both outfits could make this a more regular fixture in League Two next term.