Home F365 Features No room for Giroud: An XI of FA Cup winners with two teams 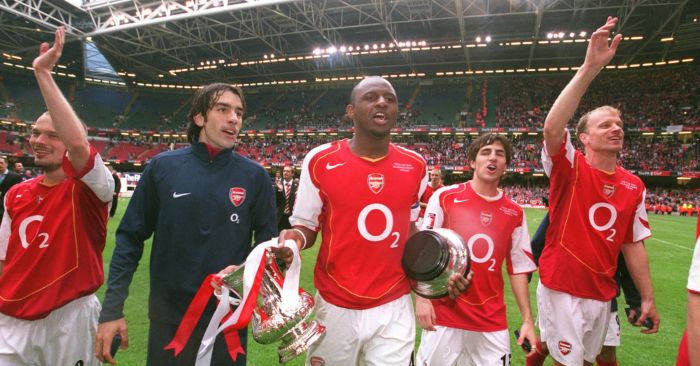 Chelsea striker Olivier Giroud will be looking to win his fifth FA Cup this Saturday, having lifted the trophy three times with Arsenal and once with his current side. Here’s an XI made up from players who’ve won the cup with two different teams.

Goalkeeper: Petr Cech
Arsenal and Chelsea faced off in the final three years ago, with the now retired Petr Cech on the bench for the Gunners as they defeated his former club 2-1. The result made Arsene Wenger the most successful manager in the competition’s history, as he won the trophy for an incredible seventh time, whilst Cech himself became a five-time winner, having lifted the cup four times before with Chelsea alongside Frank Lampard. If you fancy a goalkeeper challenge, try naming the keeper who won the cup once but was on the losing side with three different clubs.

Right-back: Lassana Diarra
French international Lassana Diarra watched from the bench as Didier Drogba’s big-match instincts won the cup in 2007. The Ivorian’s goal in extra-time was enough to defeat Manchester United but a year later the final wasn’t such a heavyweight affair, as Cardiff City and Portsmouth battled it out at Wembley. Diarra was in the starting line-up this time, helping Pompey to the win under Harry Redknapp.

Centre-back: Sol Campbell
Captain of the Portsmouth side that year was the one and only Sol Campbell. The Notts County legend won the Cup with Arsenal in 2002, helping the Gunners to a 2-0 win over Chelsea. Campbell was suspended for the 2003 victory over Southampton and watched from the bench as Arsenal defeated Manchester United on penalties in 2005.

Centre-back: Gary Ablett
Eight years ago, Merseyside mourned the death of a man who was a hero for Everton and Liverpool in the FA Cup. Gary Ablett lifted the famous trophy with the Reds first, with his side defeating their local rivals in the dramatic 1989 final. Six years later, Ablett was celebrating with the Toffees, as they saw off favourites Manchester United at Wembley in 1995.

Left-back: Ashley Cole
From lining up alongside David Seaman and Tony Adams in 2002 to lifting the trophy next to John Terry and Frank Lampard in 2012, Ashley Cole has won the FA Cup a momentous seven times. The London-born defender has three wins in Arsenal colours and four in the blue of Chelsea. Having worked with Lampard at Chelsea in an academy role, Cole will surely be supporting the Blues on Saturday. Arsenal fans wouldn’t want it any other way.

Central midfield: Cesc Fabregas
A team-mate of Cole in the 2005 FA Cup final, Cesc Fabregas is another player who has won the competition with Arsenal and Chelsea. However, unlike Cole, the Spaniard had to wait 13 years before he lifted the trophy for a second time. Fabregas was part of the Chelsea side that scored just once against a central defensive partnership of Chris Smalling and Phil Jones in the 2018 FA Cup final – although Eden Hazard, Giroud and friends did still fire them to victory.

Central midfield: Patrick Vieira
The fourth member of Arsenal’s 2005 FA Cup-winning squad in this side, Patrick Vieira captained the Gunners to glory over Manchester United in his last match for the club. The Frenchman’s decisive penalty in the shoot-out earned him a third winner’s medal, after victories in 1998 and 2002. Vieira missed the 2003 triumph through injury but came off the bench to play in Manchester City’s 2011 win over Stoke City to bag himself a fourth FA Cup.

Central midfield: Juan Mata
He might well be one player Manchester United need to ditch this summer but lovely Juan was man of the match for Chelsea back in 2012 as the Blues defeated Liverpool to win the cup. The Spaniard was on the score-sheet at Wembley four years later, equalising for the Red Devils against Crystal Palace in the 2016 FA Cup final. Jesse Lingard’s winner ensured fans all over the world were spared Alan Pardew’s full dance move repertoire and helped Mata to his second win in the competition.

Centre forward: Mark Hughes
Like Mata, Mark Hughes won the FA Cup with Manchester United and Chelsea, with the Welsh Wonder first lifting the trophy way back in 1985. Hughes scored twice in 1990, bagging the equalising goal against Crystal Palace to take the game to a replay. Lee Martin’s winner in the following match saved Alex Ferguson’s job and ensured Hughes won the trophy for a second time. He lifted the cup again four years later as the Red Devils thrashed his future club 4-0 in the 1994 showpiece before winning the competition for a fourth time with Chelsea as a 33 year old in 1997.

Centre forward: Nwankwo Kanu
One of Harry’s heroes in 2008, Nwankwo Kanu scored the all-important goal for Portsmouth as they defeated Cardiff City to win the FA Cup for the second time in the club’s history. The Nigerian had previously won the competition twice at Arsenal but was on the bench for the Gunners in 2002 and 2003, with Wenger’s men seeing off Chelsea and Southampton respectively.

Centre forward: Nicolas Anelka
Giroud will have to settle for a familiar spot on the bench in this side, with his fellow Frenchman Nicolas Anelka taking the final starting spot. Le Sulk won le bulk of his medals at Chelsea, including two FA Cup wins in 2009 and 2010. However, he first lifted the trophy as teenager in 1998, scoring Arsenal’s second goal in the Gunners’ 2-0 win over Newcastle to complete the club’s league and cup double.