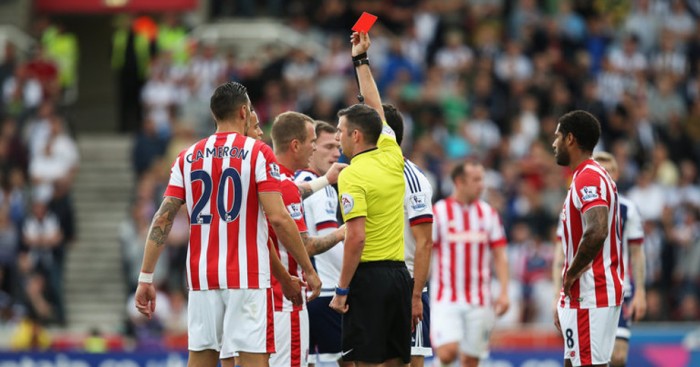 Stoke midfielder Ibrahim Afellay’s suspension after his red card against West Brom has been reduced to two games following a successful appeal by the club.

The 29-year-old Holland international was sent off in Stoke’s defeat to the Baggies, when having been brought down by Craig Gardner and then touched on the face by his hand – he reacted by flicking his own hand into the Albion midfielder’s face.

The Football Association on Wednesday confirmed the suspension had been reduced from three to two matches, with the Dutchman expected to miss Stoke’s games against Arsenal and Leicester.

A statement on the FA Twitter account read: “A claim by Stoke City that the standard punishment for the red card for Ibrahim Afellay was excessive has been upheld following an Independent Regulatory Commission hearing.

“Afellay was sent off for violent conduct against West Bromwich Albion on 29 August 2015. His suspension has been reduced from three matches to two matches with immediate effect.”