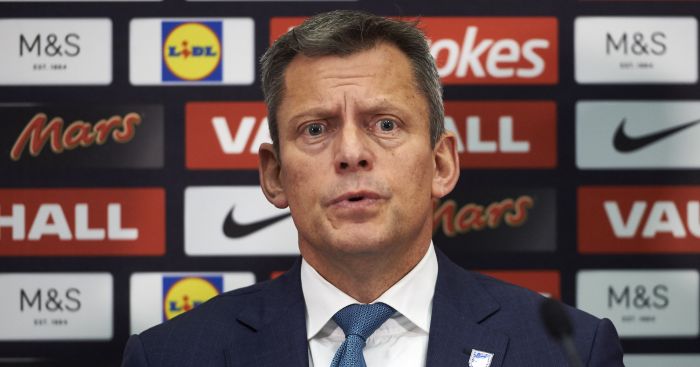 Football Association boss Martin Glenn has promised that any club guilty of “hushing up” sexual abuse to protect their image will be punished.

The FA chief executive was speaking at a news conference on the day it was revealed that a dedicated NSPCC helpline for football received 860 calls in its first week.

Seventeen British police forces have confirmed they are investigating fresh allegations of historic abuse. A Greater Manchester Police investigation has received reports from 35 people and has identified 10 suspects, the force said.

When asked about reports that some clubs may have paid off alleged victims in return for their silence on the matter, Glenn said this would be investigated by both the police and the FA’s independent review.

Sitting beside new England manager Gareth Southgate, Glenn said: “We’ve committed to a full review, shining the light on what happened in the past in football.

“We have clear rules in the game and if there’s any evidence of a breach of those – and hushing up would be one – when it’s our turn to apply the rules, we absolutely will, regardless of size of club.”

When pressed, however, on the possible existence of non-disclosure agreements and gagging orders, Glenn said: “I can’t say if there has been a cover-up in the game (but) I doubt it.”

Glenn’s comments come after the Daily Telegraph reported an allegation that Chelsea made a confidential payment to a former youth team player who accused the club’s ex-chief scout, Eddie Heath, of sexually abusing him.

The player is reported to have made the allegation, which relates to possible offences in the 1970s, in the last three years. Heath died before the allegation was made.

On Tuesday, the club issued a statement to say it has “retained” an external law firm to carry out an investigation. It added that it would co-operate with the FA’s wider inquiry, which is being led by Kate Gallafent QC, but would make no further comment until that work was completed.

That statement from Stamford Bridge followed FA chairman Greg Clarke’s comment that he found the idea of buying a victim’s silence “morally repugnant”, while the governing body’s head of equality and safeguarding Sue Ravenlaw suggested it could also be illegal.

This point was picked up by Glenn when he said: “If there are restrictive contracts, through employment law, which prevent people from speaking out about a crime, because that’s what we’re talking about, then it must be dealt with.

“But the primacy needs to be sorted out: where does the police get involved, where does the FA? But the only way this gets dealt with is through openness and honesty.”

Both he and Southgate added their voices to the chorus of support to the more than 20 players who have come forward to discuss their experiences since former professional Andy Woodward first spoke out a fortnight ago.

“The bravery of the players who have come forward is exceptional – to hear their stories is heartbreaking,” said Southgate.

The National Police Chiefs’ Council have revealed that around 350 victims have come forward to report historic sexual abuse.

On Thursday night two former Southampton schoolboy players alleged they were groomed and abused by a former club employee.

Dean Radford and Jamie Webb waived their right to anonymity to tell BBC South Today about their experiences.

Radford said he was forced to “snuggle up” with a club employee on a couch and added: “It was very odd for me because this was the first experience I’d had of that sort of closeness and whatever else you want to call it.

“The reasons he gave were that we needed to trust him, he needed to be like a second father to us. If we trusted him, and it worked both ways, then the chances were there that we could become a professional footballer.”

Radford also alleged he was sexually assaulted when he was asked by the employee to lie down for treatment on a back injury.

Webb said: “I recall clearly he tried to move down and put his hand in between my shorts and my tracksuit that I was wearing and I just blocked him.”

He added: “You don’t live every day of your life crying your eyes out and walking around with your head down, you get on with life as normal, but you still have it there, it’s buried there deep, and it comes up, and it will keep coming up for the rest of my life.”

The BBC report said Southampton would co-operate fully with any police investigation.

The force said it had received ”a number of reports” of allegations and club officials have met police.

Detective Chief Inspector Shelley Hudson, leading the investigation, said: “We have launched an operation into complaints of non-recent child abuse at Newcastle United in the 80s and 90s.

“These are some extremely serious reports of abuse and will be investigated with the highest of priority by the force.

“I have also met with Newcastle United officials who confirmed their full support and commitment to assisting the investigation in any way possible.

“We acknowledge the bravery of victims who have already taken the step of reporting abuse to the police and we are keen to speak to others who may have suffered similar abuse.”

Former Newcastle chairman Sir John Hall, who held his role from 1992 to 1997, told BBC Look North: “If it was happening, I don’t know, basically, who knew about it because certainly, I didn’t and I don’t think any of my board did. If anybody knew, they kept it from me.

“I never heard any rumours – and I used to keep a tight ship. But had I heard about it, I would have stamped on it straight away.”